The FEMA Guide to Managing Your Detention Camp 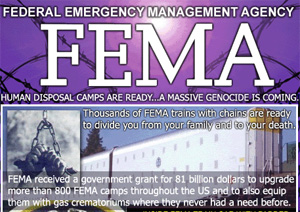 Congratulations! Your FEMA camp is full to capacity. You have stuffed every one of your FEMA trains full of innocent Americans and crammed them into your razor wire ringed detention facility.

It doesn't matter if it was done under the auspices of a "relief effort" in the wake of a HAARP false flag tornado or it was a good-old race war gun grab. You need something to do with all these people! Well, technically not people, they are subhuman patriots.

Time to start filling those FEMA coffins? Call in the Spetsnaz? Bring in the UN troops?

Whoa there! Slow it down. A full FEMA camp is a good problem to have. There are a lot of things you can do with so many dissidents.

Not all of the dissidents interned at your camp are hopeless American Freedomists (the official term for all those who believe in the Old World Order). Sometimes you can teach them to go about their lives in a way that is beneficial to the world government the USA has been trying to establish for all these years by never signing even the most benign UN treaty.

Show them the picture of George Washington kissing Thomas Jefferson. Go through the material that counters the Heritage Foundation's "Latinos are genetically related to Gremlins" research. Try to explain to them that they can't compare FEMA camps to the Holocaust and deny the Holocaust actually happened at the same time.

Try to sit them down and explain that Ronald Reagan worked with the Iranians to wage an illegal secret war. Be sure to explain that the reason black people never give a shit about FEMA camps is because we've been sticking them in FEMA camps for over a century. They're called prisons. 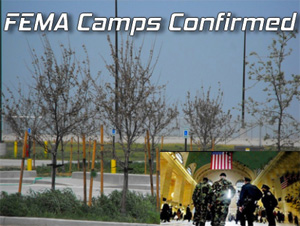 Keeping dissidents busy will help reduce unrest. Lead them in the singing of the Obama song that is mandatory at all grade schools. Teach them the new pledge of allegiance that replaces "one nation under god" with "one nation under a respect for the value and agency of human beings."

Play basketball telling them to "forget the fundamentals" and focus on "thug style showboating." Make something out of yarn, like a yarn model of the prison they have constructed in their own minds by slavishly listening to shysters on the radio peddling gold coins and survival meals.

Watch TV shows that promote the coming world government like The Amazing Race (the most amazing race being a photogenic caramel mélange of all races) and Voltron (the lions of all nations are stronger as one than as many).