We've got a bumper weekend for you right here, with no less than four reviews for the films that hope to give you that ha-ha-hilarious post-Hallowe'en lift. Ian "ProfessorClumsy" Maddison kicks things off with Due Date, the funniest film since The Hangover; follow that up with Joseph "Jay Dub" Wade's review of Megamind, the funniest film since Due Date; Ian Maddison returns to pick things up with Four Lions, the funniest film since Megamind; and Martin R. "Vargo" Schneider tops everything off nicely with his thoughts on Conviction, which isn't funny at all.

EXPECTATIONS: Due Date has been marketed very cleverly with the line "The funniest film since The Hangover" appearing on every poster, trailer and TV advert in an attempt to get those rabid Hangover fans to fork over their hard-earned dough. Unfortunately, "the funniest film since The Hangover" is a line that seems to have been attributed to every American comedy released since ... well, since The Hangover. Either that means The Hangover isn't very good after all, or it means that American film comedy has been steadily improving with every subsequent release. What a bright future we have ahead of us if the latter turns out to be the case!

REALITY: Having watched Due Date, I feel more inclined to believe that it is, in fact, the former statement which is true. Due Date is well made, sure. It has some solid sequences, certainly. You could even say that film has some modicum of charm. But if there's one thing Due Date is lacking, it's laughs. 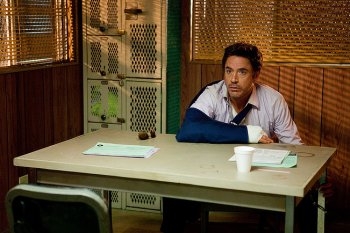 What hilarious antics could have led Downey to this predicament?This is one of those classic "two broken, immature men go on a road trip together, develop a friendship, have that friendship tested and finally develop an awareness of their personal problems and endeavor to overcome them" films. In this case, the broken and immature men are Peter Highman (Robert Downey Jr.), who is determined to return to Los Angeles in time for the birth of his son (hence the title), and Ethan Tremblay (Zack Galifianakis), a hopeful actor trying to get to Hollywood so he can live out his dream of appearing in an episode of Two and a Half Men. That's right, we're going there. This film climaxes with a scene from Two and a Half Men, which should perfectly illustrate the level of comedy on display here.

During their travels, the pair gets into all kinds of scrapes, usually caused by the fact that both characters feel the need to be bizarrely antagonistic toward each other for absolutely no reason and then suddenly turn the situation around with the power of friendship. It doesn't help that they are both incredibly difficult to like or relate to. Peter, for example, starts the film obsessing over what not to name his child; his major concern being that his surname is Highman, which sounds like hymen. Get it? He later punches a child in the stomach, insults a wounded war veteran and even spits on a dog. He would be a monster in the hands of any other actor. It's a testament to the power of Downey that he is able to make this horrible shithead even half-watchable with his apologetic flubberty-druthers, but the whole thing is compounded by the walking cartoon character with whom he has to share his screen time.

In this scene, Galifianakis does something stupid and Downey responds with violent rage. It's a real stand-out.

The character of Ethan is supposed to be the typical lovable buffoon, charmingly naive and optimistic, but the writers seem to have conceived of him purely on the basis of "what is the single stupidest thing this person can say or do at any given moment?" He is not a human being, on paper or in his performance, which makes me wonder if anyone even bothered trying to fix the script at any point. A lot of the problems with these characters could have been solved before shooting began, but Galifianakis approached the role with as much absurdity as he could possibly muster. There is a constant din of noise emanating from him at all times, snorting, grunting, sighing, warbling, burbling. I think he was trying to channel Jack Lemmon in The Odd Couple, but he ends up coming across more like Spongebob Squarepants, perpetually squirming and squeaking in a way that makes you want to switch him off. 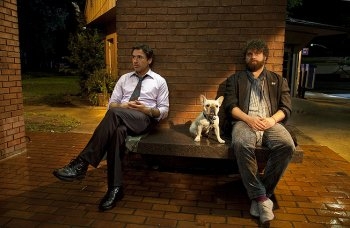 One of the quieter scenes, if you don't count the constant racket pouring out of Galifianakis at all times.At times, the chemistry between the two leads actually shines through. There are points in the narrative when you actually start to feel like these two individuals are developing a valid friendship that you can believe in and root for. There's one scene in particular that I feel sums up the entire film. Peter and Ethan arrive at the Grand Canyon to lay Ethan's father's ashes to rest. The scene goes on for some time, with much bumbling and mumbling and flubberty-druthering, and it starts to feel that the connection between these two men is valuable. Then Ethan says and does a stupid thing, so Peter tries to murder him. You progress almost all the way to heart-warming and then reset back to zero in the same scene.

That's not to mention the stuff happening on the side-lines that goes nowhere. At one point, Jamie Foxx shows up, and it is very heavily implied that he might be the real father of Peter's forthcoming infant. This plot point is quickly abandoned apart from a throwaway blink-and-you'll-miss-it gag right at the end, which just leaves you wondering what the point of it all was. There's even a hugely destructive, consequence-free car chase that just kind of sits there like a really stodgy pastry sits in your stomach, making you feel bilious and regretful.

While competently put together, Due Date is little more than a series of increasingly ridiculous events that serve little purpose. The fact that the film scrapes in at 95 minutes and yet somehow feels like mostly filler is a testament to how slight the concept was in the first place. Galifianakis does something stupid, Downey gets infuriated, repeat until you reach your destination. And then end it with the lingering feeling that Downey's child will suffer a lifetime of violence and verbal abuse until it eventually ends up just like him and we get Due Date 2: Generation Kill in 2045.

MINORITY REPORT: I'm not sure what you're expecting here. The whole film is just a version of Planes, Trains, and Automobiles designed for a group of people who don't get subtlety. Imagine if instead of "THOSE AREN'T PILLOWS!" we got "Those aren't pillows, your hand is between my ass cheeks, and that's something two heterosexual men shouldn't do to each other, and it makes us both uncomfortable." Now imagine Steve Martin saying that. Wait, that sounds hilarious. -Martin R. "Vargo" Schneider