Yet Another Ronald Reagan Retrospective 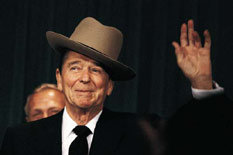 Au revoir cher ami.Nothing brings the United States together like the death of a popular ex-president and as far as the "could die any minute" list of ex-presidents goes Ronald Reagan was at the top. Imagine my surprise, on the heels of an announcement that he was going to die any minute, when he actually died! Hours of D-Day memorializing fell by the wayside on every 24 hour news channel and network presentation so that anchors could solemnly recite the good parts of the legacy of Ronald Reagan. It was (and still is) impossible to turn on almost any channel without seeing footage and announcements about Ronald Reagan. Before my Sunday was over I saw the cast of Reno 911 reading a heartfelt letter from Michael Reagan and witnessed Carson Daley actually tearing up as he watched file footage of Ron and Nancy.

Conservatives around the country fondled sacks of jellybeans like they were rosaries and spat venom at anyone who seemed disinterested by the news that their political hero had just expired. Personally, I was glad he died, because Alzheimer's is a fucking horrible way to decline and these last few years must have been nothing but suffering for his family and even him during his increasingly rare lucid moments. Alzheimer's is a funny disease that way. It leaves the body basically intact, but as it chews it way through the brain it will take and take, until there is only that body left. The pain, the anguish, comes from those brief moments when the real person inside that husk surfaces. For a few minutes, maybe just a few seconds, they see what they have become, remember what they have done.

I want to devote this article to the Ronald Reagan that I knew. The guy who wasn't very good at kickball and wasn't shy about watering his lawn while underdressed.

The Reagan I knew was affable and always had a nice - and honest - thing to say to everyone, even if he hated their guts. I'll never forget the time he took me for a ride in his brand new El Camino. He was so proud of that damn car and no one on the block was mean-spirited enough to tell him it was retarded. His was cherry red, "firecracker red" as he called it, and the day he bought it he saw me looking at it and asked if I wanted to go for a spin. I politely declined but Ron wouldn't hear of it and ushered me onto the pleather seat, reminding me to buckle my safety belt and straightening the mirror as we backed out of his driveway. He went on and on about how it was a new class of car. He felt certain that it would revolutionize the automotive industry. You know, I think he still had that car, looking showroom fresh, on the day he died. I'd like to think that once in a while Nancy got a particularly nice Secret Service guy to take Reagan out for a spin. 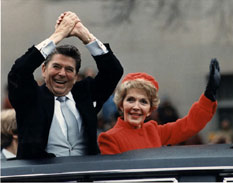 Reagan and Nancy were quite a couple.Ron and Nancy had such an amazing relationship too. I remember for a while Nancy was crazy about cats. I'm talking absolutely nuts about them. She would take in any stray and every Sunday she would drag Ron to the animal shelter and come home with an armload of mewling tabbies. Reagan just smiled and took it, although he learned to lock the door to his study after one of the male cats sprayed every square inch of the room in the middle of July. I vividly remember drinking lemonade on the porch with Reagan talking about the Giants' chances to make the playoffs. Cats just kept opening the screen door and sitting on him. By the time I left he actually had a cat sitting on his head. It was surreal.

Not to say that Nancy didn't do her share of putting up with Ron's antics as well. One spring Ron asked me to come over to his backyard and have a look at something. He was watering this big patch of dirt with the garden hose and I saw all of these shovels and spades lying around. He told me that he had decided to dig a hole. I asked him why and he told me that he was doing it because he had never dug a really big hole before. Every day he would be out there digging that hole in a sweat-streaked tank top. The guy had some serious muscles at the time and Nancy would just watch him from the kitchen window. She would shake her head in fake disappointment at how much time he was wasting digging that hole, but I could tell from the far-off stare that she just fell in love with him even more every time he raised a shovel full of dirt over his shoulder.

By mid-summer that hole was almost thirty feet deep. He had sandbags and wooden slats to keep it from collapsing. I think he ended up making it into some sort of weird subterranean apiary. I clearly recall him spending hours looking at all sorts of seed kits he could buy for bee colonies and he totally filled the backyard with flowers.

When I was friends with Ron he didn't care for rap music very much, instead preferring big band stuff and poppy love ballads like the kind of shit Bryan Adams sings. All the same, Reagan would go to great lengths to make you feel liked. I remember when Ice Cube's "Predator" album came out I couldn't resist talking it up to Ron. He was so nice that he acted like he loved the album too. I asked him what his favorite song was and he said "oh, well, I like all of them equally just about". So I asked "even 'When Will They Shoot?'" and of course he said he liked it and then I just made up a title, I think it was "Rapper's DeLorean", and he said he loved that one.

So Reagan may not like rap music much, but I think he can appreciate good poetry, and what is rap music but the poetry of the street? With that in mind I have written a rap song to dedicate to the loving memory of Ronald Reagan.

Laying flowers on the grave of the Waffen SS,
Straight playing Jimmy Carter and cleanin up his mess,
You're an old school shoota,
Central America booty loota,
Poppin collas and stabbin Y,
Droppin' dollas on SDI.

Cuz you was a crowd pleasa,
Straight squeeza,
If you was a liberal we didn't needja,

Secret wars in eighty trizzay,
Runnin' up in Nicarizzay,
Orderin' M1s to keep the communizzays bizzay,
Pullin' more voters than Proposition: Free Money,
Got corporate niggas thinkin' you the Easter Bunny,
Niggas know Reaganomics got they up side sunny.

Got more Tech 9s than a plane full a crips,
You the one dealin and winnin' all the chips,
Mondale bought it,
Ferraro's husband got an audit,
While you be smokin' up a tree,
Olly North be swingin' on it.

Cuz you loved you some jelly beans,
Nancy's helpin' troubled teens,
Had your niggas runnin' up in House Ways and Means

Shout out to Gingrich and the Hardballas,
Big ups to Froze Out Bush Senior,
And straight out love to all my niggas in the Camp David in the sky.

I'm not sure if Ron would particularly care for the music or lyrics, but I know he would still appreciate the sentiment behind my rap and have nothing but nice things to say about it. 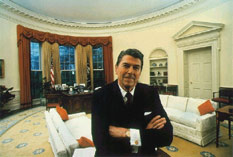 Ruler of the world or owner of a broken heart?Years after I moved away from Ron's neighborhood I bumped into Ron on the streets of Austin, Texas. I think it was around the time he got shot by John Hinckley, although I can't remember if it was before or after. He was eating this weird huevos rancheros in a rolled up cone of crisped tortilla that looked like a really disgusting ice cream cone. He practically threw the thing on the ground when he saw me and he just came over and gave me a big fucking bear hug. I asked him how things were and he said "fine, fine", but as we reminisced a little I could see this look in his eyes. He was different. Harder. Washington had changed him, and not much of it was for the better. The same old demeanor was there, but in a way I felt that loss - that disconnect - that wouldn't come for many years for most Americans. I had lost the real Ronald Reagan. The guy who would punch your shoulder if he saw a Volkswagen and would eagerly volunteer to help if you said you were moving.

Here was this other Reagan, this foreign land of Ronald Reagan. He looked the same, but the words were all different and scary. We parted ways that day and I never saw him in person again. Oh, he sent the usual Christmas cards with him and Nancy next to a tree and all fifteen of their cats in sweaters, but it was different. I could sense it was perfunctory. I could imagine him taking a break from reading a briefing on a SEAL raid in El Salvador to sign his name next to Nancy's on 500 identical Christmas cards. Before it was with love, but by that point the love was gone. Washington took it, ate it alive. It does that to everyone.

Thou Band is Not Welle

Alas, after almost ten years of infuriating quasi-religious pap, mega-platinum superstar hitmachine Creed has broken up. This week, Something Awful's resident rock and roll expert Dr. David Thorpe takes a look back at the career of Creed, and in doing so, weaves a tall tale of one of rock and roll's most unusual acts. 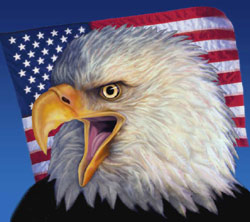 "2000 was to be the height of Creed's success, but like a supersonic jet plane pushing the boundaries of how high and fast mankind can soar, the fuselage was bound to start cracking. Bassist Brian Marshall stirred up controversy when he launched a verbal attack on Pearl Jam, calling them "a passel of goddamned women" and "unworthy of my diseased, briny fluids." This caused a considerable backlash in the press, and Stapp attempted to distance himself from the outspoken bassist. The trouble continued when Marshall turned his sights on God, offending Stapp by calling the creator "a mossy old tortoise" and "a natty-bearded know-nothing." The rest of the band was left with little choice but to terminate Marhsall and replace him with a majestic, soaring eagle, representative of their pride and connection to God's masterpieces of nature. "

Take a look back with us at one of the strangest tales in the history of rock, and join us as we say Goodnight to the Creed Era.