It seems like it was just yesterday that I parachuted onto the Internet thinking I was infiltrating a land of glowing wonderment, but instead I immediately fell victim to its shiatsu death grip. I was sealed in the trunk of a vehicle racing down the Information Superhighway at reckless speeds, and my girlish screams for help disappeared into the air like imploding sperm whales. But the flashlight of fortune shined upon me, and I was delivered to safety when my mobile prison crashed into a digital mailbox and exploded like a rickshaw would explode in a Jerry Bruckheimer movie involving an unnecessary rickshaw chase scene that also included a Jaguar, a tank, and an Apache helicopter piloted by Gary Busey. When it finally ended, when I finally climbed out of the wreckage, I saw a smiling face waiting for me. I can remember in vivid detail the features that demarcated this shimming face like a map of perfection: that elegantly curved smile, those two piercing eyes. It looked something like this:

Over time I would see many more faces like this. I soon learned that even though the Internet was a cold and distant apparatus designed to isolate people and destroy them systematically, it was also capable of displaying "emoticons," which put little graphic faces on the feelings of the amorphous blobs populating this new digital universe. I've talked about emoticons before in past articles, such as that one update where I spent 2,500 words discussing the importance of ending every single sentence with a smiley face, unless it was a sad sentence, in which case it should end with a frowny face. Though my binary emoticon range is limiting, it prevents too many emotions from spilling over into the online written word. We must repress all shades of gray, else it's only a matter of time before we're being strangled by a rainbow comprised not of colors, but various bands of gray. It should come as no surprise then that I'm appalled at the supernumerary emoticon options taunting me at every turn. With that said, I'd like to take you on a stroll down emoticon lane! I just hope you don't fall victim to some crazy Vietnam flashback from seeing all these tiny yellow emoticon faces staring at you. Oh, and in case you aren't familiar with emoticons, I've included some example contexts to show how they are used.

Ben is apparently out marrying the sea he loves so much and is simply too busy to write a plug for his article, so he left me instructions to feed his trophies and post his new movie review. It's part one of a two part series reviewing "Dark Stories: Tales From Beyond the Grave." Take a look: 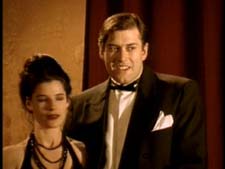 Ever since filmmaking fatty Peter Jackson hit it big with the "Lord of the Rings" trilogy, New Zealand has been hailed as the number one hot spot of the cinematic world. And why not? Personally, I loved the "Rings" films, and I was recently lucky enough to see Jackson's early masterpiece, "Dead Alive" on the big screen. Yes, New Zealand has the perfect locations for any sort of scene imaginable, which is why I thought it would be a nice change of pace to see seven young directors get in there and really fuck it up. Hence, "Dark Stories: Tales From Beyond the Grave."

Please read it and send Ben your electronic love and kind wishes. He likes fruit, so send him a fruit basket, too.