I would like to address an important and critical issue in today's update which I feel I must write about as my patriotic duty as an American and a representative of black Jewish females everywhere. My bathtub, which previously used to be some kind of large white bowl-like thingy for submerging myself in cold water and washing the filthy sins off my skin, has transformed itself into something entirely new and disgusting much like when that unfortunate kid in Franz Kafka's "The Metamorphosis" woke up to discover he had inexplicably turned into Paris Hilton. I have lost control of my bathroom and some nefarious, non-American alien force has taken over my bathtub, using it as a trans-dimensional ladybug murdering machine to accomplish whatever sinister goals they are attempting to accomplish. Let me be the first to assure you that the real estate person never mentioned anything about a trans-dimensional ladybug murdering machine in the master bathroom and if he did then I would've demanded at least a 5% discount or a free subscription to that one magazine about red cars and naked women's tits and how you'll get naked women's tits if you buy red cars. I foolishly assumed that my new house would NOT include a trans-dimensional ladybug murdering machine and it turns out that's one of the biggest mistakes potential homeowners can make when shopping for homes, as shown in this revealing list I recently discovered when doing a Google search for "BUYING HOMES + MISTAKES + CHEAP VIAGRA":

The Top Five Most Common Mistakes Homeowners Make Before Buying a House:

Please note that "asking about a potential trans-dimensional ladybug murdering machine" is not listed anywhere on there, but it damn well should be and if I had my way I'd rank it somewhere in between number two and three. Perhaps even number one and two if I'm feeling particularly saucy and wearing my "King Sexy" underpants. This horrific discovery of mine came about half a year ago when I decided to turn on my bathtub for the first time because the muscles in my back were once again trying to strangle my spinal cord to death with piano wire. If you've got access to a large amount of prescription painkillers and muscle relaxers you'd like to send me, please feel free to do so. I'm not kidding; I want to abuse so many narcotics that I eventually become a prominent Republican talk show host and lose my hearing, in that exact order. As I twisted the hot / cold faucet in my bathtub (hot water refuses to come out despite what knob I turn so it doesn't really matter which one I attempt to use), I glanced up to see a single dead ladybug resting on the part of the bathtub used to place your beer on to keep from tipping over and spilling onto your groin.

"Hmm, that's odd!" I remarked to myself in either a quirky or quizzical fashion, depending if my role is being played by Hollywood's Fred Savage. "I certainly didn't expect to be greeted with the cheerful image of floating dead ladybugs when climbing naked into this pool of rising water located in the luxury of my own home!" Then my cat began making horrible guttural retching sounds and proceeded to throw up key body parts of some random animal missing key body parts necessary to stay alive, so I proceeded to forget about this particular little bathroom deviation and instead focused on shouting "goddammit, NO!!!" at my cat until he ran away to stare at the kitchen wall in utter shame for a few hours. If you find a small woodland creature who is lacking a good portion of its face, eyeballs, throat, and digestive organs, send me an email and I'll be happy to scrape the cat puke into an envelope so you can glue it all together and form a new and exciting animal which will obey and protect you and eventually go insane like in "Pet Sematary," which I do not believe Craig T. Nelson starred in despite the fact that it was about Indian burial grounds. Please keep this movie in mind next time you are considering digging a hole and burying your dead pet on top of a deceased Native American who would probably object to your actions if he was able to speak or not be dead.

Cut to about a month later. I was walking through my bathroom and minding my own business like the arrogant American I am, when suddenly a dark speck out of the corner of my left eye caught my attention. Try to imagine the surprise which coursed through my veins as I turned and realized that my bathtub, a place of solace and relaxation, had turned into the grave image of pestilence and disease you see before you: 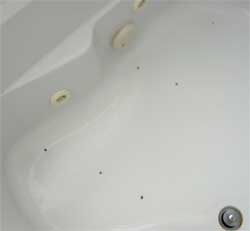 See those black dots? Those are not specks of dirt or mud or buttons or something else that you'd expect to see in a bathtub, and I'm not even sure why you'd expect to see buttons in your bathtub unless you live in Pee Wee's Playhouse or a button factory run by an angry foreign individual who flies into a whirlwind of rage whenever he suspects his whore wife is cheating on him. If you'll bother counting the dots featured in that blurry image, you'll see that there are not two dead ladybugs, nor three or even four, but there are SIX highly deceased corpses scattered across the lining of my bathtub, none of which I explicitly asked for in any agreement either verbal or otherwise. I don't even have the foggiest idea which governmental agency I'd contact to request ladybug corpses, but I'm sure I'd inevitably end up speaking with the perpetually perturbed obese woman who speaks English through a series of grunts and whistles that only a specialized computer designed by Stephen Hawking's powerful brain can understand.

This mysterious collection of inexplicable insect death has raised the following questions in my ever inquisitive brain, which has also determined the following highly correct and logical answers:

QUESTION #1: Where do these ladybugs come from?
PROBABLY ANSWER: Another dimension. This guess is based off the fact that there are currently no visible ladybug nests in my sink or anywhere in my bathroom, not that I know what a ladybug nest would look like if I saw one. I'm thinking it would resemble those monster generating huts from Gauntlet that spawned a constant series of ghosts, trolls, and feisty little homosexual men who threw deadly brown tennis balls. Since I recall my real estate agent specifically stating "this house contains absolutely no monster generating huts which produce feisty little homosexual men," I think we can safely rule out that option. Thus, by process of insemination, we can conclude that these insect invaders are crossing into our dimension through some kind of breech in the space / time continuum, perhaps the same one responsible for bringing us the Buffalo Bills.

QUESTION #2: Why are these dead ladybugs spawning in my bathtub of all places?
PROBABLE ANSWER: I recently asked this question to world-renowned dead ladybug expert Kevin "Cakewalk" Bowen and he claimed my pipes were full of plants, but I easily dismissed this theory on the account that he works for Gamespy. Also there's no possible way that my bathtub's pipe could have any plants living in it because my ropelike pubic hairs would've choked them to death long ago. I then asked Doctor Steve "Sensurround" Engert, who received his degree in Internetology from the Online University of Email, and he explained that God was punishing me for my sins. This is obviously not the case because I know for a fact that God is punishing me for my sins by giving me such a small penis, not by showering me with dead insects. After failing to find my answer from him, I posed the question to fellow author Zack "Geist Editor" Parsons who stated the ladybug plague was "dark wizardry" caused by a series of arcane, unknowable "evil-Jesus" creatures. I have done some complex research involving a computer and the "ENTER" key, and while I haven't run across an answer which validates Zack's theory, I have stumbled upon something more sinister. Take a look at the previous photo after being enhanced with a digital imaging program capable of not only producing the color green, but the color orange as well: 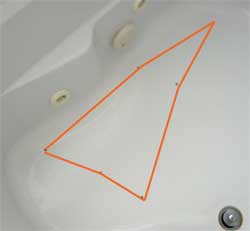 By joining the ladybug corpses with a series of orange lines, a shape resembling a triangle with a coincidental orange outline emerges. Are the pieces coming together for you yet? Perhaps this last image will solve the puzzle for you and reveal the sinister nature behind the ladybug crisis: 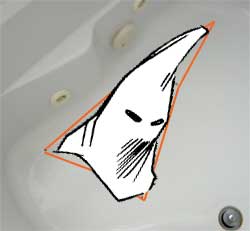 That's correct, the Ku Klux Klan is somehow using advanced futuristic technology to transport dead ladybug carcasses into my bathtub by opening up space / time portals, as can be seen in this dramatic recreation done by famed artist Tom "moof" Davies:

Also please note that the President and UN Representative of Benin, Mathieu Kerekou, is in no way responsible for the appearance of these dead ladybugs. If you don't believe me, please consult the following photographic proof which shows beyond a shadow of a doubt that his face doesn't nearly fit in that orange triangle: 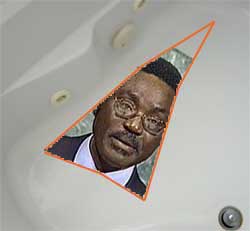 See? This is conclusive proof that the KKK is clearly behind the bathtub ladybug teleportation conspiracy, and UN representatives from Benin are powerless to stop them. How can I expect to end this curse if not even Mathieu Kerekou - THE Mathieu Kerekou - can help? If only I lived in that house across the street, the one Craig T. Nelson bought last August, then I'm sure the ladybug situation wouldn't be nearly as disturbing, mostly because it'd be competing with the corpses falling out of the walls and stuffed clowns trying to murder me under the bed. Chew on that you trans-dimensional ladybug murdering KKK assholes!

Circle gets the Square

I've been playing Star Wars Galaxies quite a bit lately, and I have to say, the game has really come along nicely. Sure, there are still problems here and there, but nothing like the problems I was having with Planetside. But that's another story. I'd just like to take a moment to thank the SA Goons that I've been playing with. I've never been part of a more organized, helpful, giving, and funny online gaming guild. My hat is off to you fine people. Please make note of the Goku and Vegeta outfits the Goons are sporting.

If you happen to see Aketo Lightdust running around in a skirt, shoot me a tell. Now onto the Goldmine.

You know back in school they'd have the posters of a kitten hanging off a branch with the caption "Hang in There" plastered on it somewhere? My school had a bunch of them all over the place. That makes me wonder, who was the sick bastard that was stranding cats out on branches for a poster photograph? We also had other posters that would tell you not to be a jerk, and a few that warned us about drugs and the like. The Goons have kinda skewered the whole "Think Positive" vibe those damn posters gave out.