A Celebration of Wealth!

Laying Down the Law!

Brandon Bird is an amazing artist. He has done two commission paintings for Lowtax as well as one for myself. In a world in which talented artists all take their work way too seriously it's refreshing to see a man with the skill that Brandon has devote it to designing and printing a "Law & Order" themed coloring book. 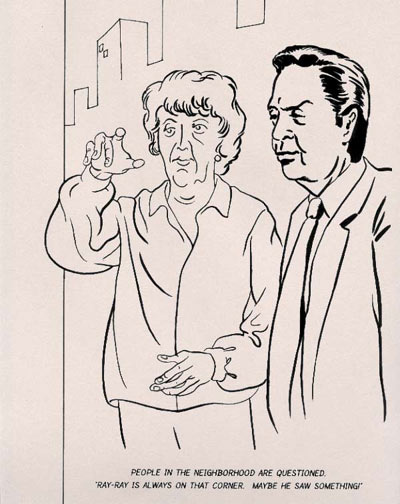 He still has a few copies left, so go and order some of this man's Law & Order coloring books!

A Celebration of Affluence 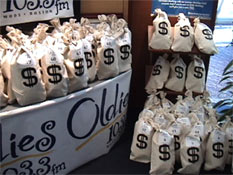 Rich is IN!Like almost every year, 2003 was a banner year for the rich. Not only did they continue to get richer, they also enjoyed a new form of exciting and refreshing celebrity. No longer were the wealthy just ridiculous communist caricatures of avarice like Uncle Scrooge or Ken Lay, they had been transformed into pure platinum stars out of the singular virtue of their wealth. The poster child of this new breed of awesome rich was definitely the incomparable Paris Hilton, who sleazed and babbled her way across the headlines. She even had her own TV show because, among no other qualities, she was rich and dumb. Some might argue attractive as well but I think she looks like a pair of nylons that has been tightly-packed with razorblades.

My point is that it's great! It's high time that the rich get the accolades that they have worked so hard to accumulate and store in unnumbered Swiss bank accounts. That is why I would like to devote this update to celebrating not just the wealthy - many of whom may have labored very hard to get where they are - but that rare breed of fabulously rich media darling like Paris Hilton; the dilettante. The idle rich. They are the current high-point of human evolution, with their Prada handbags and purebred dogs that they will discard when they stop being cute. They are above us. They are, as William Gibson would say melodramatically, "the edge".

I'm not suggesting a monochrome safari through the well-worn jungle of Paris Hilton's delightful low-light coitus or another trip down memory lane with MTV's "Rich Girls". They have enough exposure, so I think it's high time to gather round and celebrate another batch of idle rich kids that have received much less attention. I introduce to you, the terrific three; the world's greatest unknown trio of almost incomprehensibly wealthy people.

Moneybags: Jacquie has a line of credit rumored to exceed five million dollars and she stands to inherit the 950+ million dollar fortune of her father, the International Magnet magnate Nathan Googan.

Excesses: Jacquie is quietly known as one of the most discerning rich girls in the world. She lives in a converted military heavy lifter helicopter that hovers above Times Square. If she wants to go out she is chauffeured in a smaller private helicopter that can actually touch down on a retractable landing pad on the larger helicopter. This smaller helicopter is made entirely from a unique semi-solid alloy called mercinum and the rippling and shimmering exterior has built in computers that launch smoke canisters onto which it projects a photograph of Jacquie.

In 2003 Jacquie had a clone of Britney Spears made from menstrual blood swabbed from a tampon one of her agents stole from Britney's hotel room at the Sands in Las Vegas. She attended an exclusive Puff Daddy party with the clone, made out with it in front of paparazzi, and then had her bodyguard shoot the clone through the face with a speargun. The bodyguard is still in trial proceedings although prosecutors have expressed doubt that they can charge him with murder.

For her birthday Jacquie went on a spending spree throughout the Midwest buying entire towns and forcing the inhabitants to paint every object and structure within her favorite color (magenta). After realizing that the painting would take weeks to complete Jacquie ordered every person shot. When her attorney told her that this wasn't possible Jacquie relented and just had a few of the mayors severely tortured and lobotomized.

Known Companions: The idle rich are well known for hobnobbing with celebrities and fellow rich folk and Jacquie is certainly no exception. She has been seen with Brad Pitt, Ben Affleck, the exhumed corpse of Vincent Price, and Jackass star Johnny Knoxville. In 2002 she was briefly engaged to a 14-ton mound of cocaine, but the marriage was annulled before it could be consummated.

Moneybags: Thurston's father died when he was only a young boy and his mother, Genivieve, took over the family pharmaceutical business Tetroxypolyco. She quickly turned it into a powerhouse thanks in no small part to their weight loss drug Palpinax and Thurston is in line to inherit over 400 million dollars. He currently has a monthly allowance of around 50,000 dollars.

Excesses: Thurston is not known for extremes of excess, but he has earned a reputation as an ardent advocate for the rights of the idle rich. He runs a web site called "America Was Built On Money" and has written a number of self-published manifestos about a "revolution of affluence" that he assures his tiny readership will soon sweep America by storm. Thurston's talking points include the following:

The federal government should not be able to tax any money from Thurston Drysdale III, because all tax is theft at the barrel of a gun.

The poor should not receive any government aid because it will only encourage them to remain poor. They should go out and get a job and pull themselves up by their bootstraps.

The homeless are worth less than the sum of their parts. Insert them into a machine and reduce them to their base components for sale on the open market.

This country is going bad because of Mexican immigrants. They should all be stopped at the border by lines of claymore mines, with the exception of the 950 janitorial staff members being employed at Tetroxypolyco.

Free trade should never be impeded because Tetroxypolyco can save almost $8.00 per man hour by moving Palpinax production to a sewage-filled crater in Bolivia and paying eight year olds to sort drugs with their lesion covered fingerless stumps.

Except sore shoulders, those are solved by Thurston Drysdale's personal masseuse.

Thurston's only real vice is his love for firearms. He owns almost 500 weapons, which he vehemently claims lower crime in the surrounding area. This is actually true because he has erected a razor wire barricade around his entire college campus and monitors all activity from a watch tower equipped with a .50 caliber machinegun and a sniper rifle.

Known Companions: Thurston Drysdale is good friends with conservative author Andrew Sullivan, who he idolizes to the point of obsession. He also has a handful of admirers on the numerous internet message boards he frequents, but in real life most people are so put off by his appearance and mannerisms that they don't have a chance to get to know the gorgeous money inside of his wallet.

Moneybags: Moonbeam is the daughter of Miklov Honeycut, the founder of Honeycut Global Defense, and the genius behind the Honeycut Reaver, a 250 million dollar ALAV (Autonomous Legged Armored Vehicle) currently deployed in Iraq. Not only does she have virtually unlimited financial resources, she also has access to bleeding edge military hardware thanks to her father's company.

Excesses: Moonbeam is known for her obsessive eating binges followed by long conversations with the inside of a toilet. It's how she satisfies her sweet tooth while maintaining her girlish figure. In 2000 she used her father's credit card to buy an ice cream factory in upstate New York. She spent eight hours a day laying beneath an industrial sized extruder drinking in gallons of smooth vanilla ice cream and then turning her head and vomiting it into a floor drain. She continued with this for almost a week before the health department forced the factory to be shut down. Undeterred, Moonbeam moved her gorging operation to a nearby caramel factory where she would eat almost 3,000 caramels per day without even bothering to take the rappers off.

Moonbeam's vanity extends beyond her bulimia to frequent and extensive plastic surgery. In 2001 she had Diana Ross's breasts grafted onto her inner thighs and in 2002 she paid a Russian surgeon to insert a six year old Pakistani boy named Ramdi into her spinal column. Still not satisfied, 2003 brought three surgeries to Moonbeam's body, including a breast enlargement followed weeks later by a breast reduction, and then capped off with a unique surgery that replaced her nipples with the penises of Chinese infants. Due to complications involved with that surgery Moonbeam has since sworn off further enhancements in favor of tailored skin suits made out of the cured hides of bald eagles.

Known Companions: Moonbeam associates exclusively with a group of friends that she has bought and trained from slave pens in Indonesia. If they ever anger her she has them made into boots or a cape.

Signs point towards 2004 being an even bigger and more exciting celebration of unbelievable wealth. Let's hope that Moonbeam, Thurston, and Jacquie at last get the recognition from the press that they deserve!

My Mars Rover had to be put down

Hello aspiring readers of Photoshop Phriday, your dreams can now be made a reality. Thanks to a generous grant of images from the SA Forums, we can once again offer you a brand new edition of Photoshop Phriday. Our theme this week explores outer space, which is currently right above you. Don't take my word for it - just look up! Here is a sampling of "It Came From Outer Space," the latest in our ongoing series of highbrow digital image manipulations: Be sure to look at the pictures because they are free and require no down payment. This is an amazing opportunity.