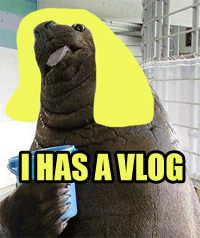 Artist's rendering of Fluttershy (Joke Copyright 2007 by The Internet Humor Council)A few weeks ago, I was at the marvelous Something Awful Estate in beautiful Grand Rapids, Michigan, doing a few laps in our famous grenade-shaped pool with fellow writer Evan "Pantsfish" Wade. I was winning - of course - but not due to the usual trick of using a stream of urine to propel myself forward at an alarming rate. Evan couldn't keep his eyes off of The World's Only Floating Laptop, leaving me the victor in our deadly game of Manatee. I floated over to Evan, dusting the celebratory confetti off of my shoulders, to find out what distracted him from our manly competition. "Vlogs," he told me, tilting The World's Only Floating Laptop screen, where I saw a YouTube video of what looked like an animated bean bag chair talking about today's trip to the grocery store. "This would make a great update," I told Evan, calling security on the PoolPhone™ to have him removed from company property. And that is why I am here today.


With the Internet, first came the blogs. They were mostly harmless, and used primarily by people looking for a day-by-day validation of their terrible lifestyles by online friends who were most likely planning to rape them. But as terrible as someone's writing was, and as pathetic as their life could possibly be, the benefit of blogs was that you didn't actually have to see the person behind the Asperger's Syndrome. Aside from a 100 by 100 pixel avatar, the true face of Internet loserdom was masked by garish color choices and Comic Sans MS. Vlogs changed all of this. Vlogs are the retarded fake TV shows you made with your friends when you were eight, except put on the Internet and produced by people old enough to run for President. And, as is with the nature of the Internet, the worst possible people complete with crippling accents, innovative speech impediments, and disarming ignorance have vlogs. These are the same people who lack the communication skills to successfully order a pizza.


To fully understand the vlog menace, we must examine a vlogger. Enter Fluttershy (this line will be a lot funnier when you see how fat she is). It's true that she's no worse than any other vlogger on YouTube; to test my theory, go to the YouTube front page, click any link, and get ready to experience a strange new feeling that is a mix of hatred, anger, and embarrassment which the Germans call das yutuben. But through her vlogs, Fluttershy is a prime example of why vlogging is the worst thing on the entire fucking planet. I'm also using her as an example because making fat jokes is really easy.


It's important to state right now that Something Awful is not responsible for any damage you inflict upon your monitor while you read this update. If you wish to take out your Fluttershy-related aggression, keep a small animal or wife nearby. That being said, welcome to Fluttershy. All 900 pounds of her. The smirks, the put-on baby voice, the faux whimsy; it's all evidence of someone whose last good memory took place in the early 1980s in front of an ice cream truck. And yet she hangs onto those rocket pop dreams by emulating a six year old for all of the Internet to see. There's a Baby Huey joke in there somewhere, but I'll be damned if I can find it.

Take note of Fluttershy's penchant for playfulness with her world-famous "glasses sketch." Did you know George Lucas himself approached Fluttershy after seeing the digital manipulation in this video? In fact, if you look closely during the last five seconds, you can see Han Solo trip over Fluttershy's tail! Bonus: Add your own questions to the does she/doesn't she game. (Ex. "Does she have to wipe herself with a store-bought apparatus?" "Does she have explosive bedsores?")

Tears of a Clown, A Really Fat Clown

What you just saw was Fluttershy's most-used vlogging technique, "pretending to cry over YouTube videos." A feature prevalent in most of her vlog response vlogs (this gets complicated so stay with me here), she uses crying to springboard into more chances to talk about herself. I imagine she just thinks of a world without Lane Bryant or escalators, and the tears start a-flowin'. But really, we learn nothing from this video that we could have guessed from seeing a brief wide pan of her body. Her soulmates are two cats, you say? Why, the next thing you'll tell me is that she owns the collected works of Neil Gaiman and has several denim jackets with Winnie the Pooh on them, purchased from The Disney Store! It's inconceivable.

At this point, you may be thinking, "Wait a minute, Bob. Aren't you being a little hard on this gentle giant, this clown of the sea?" You would be correct in thinking this, if not for two reasons. 1.) I can't show you all of the best Fluttershy videos (which would make you hate her even more), not because of Internet harassment regulations, but because she's made it impossible for these videos to be embedded elsewhere. 2.) Because of this, a simple article about making fun of an Internet loser has been made ten times harder to write, making me hate her that much more. But don't let this stop you from leaving the front page to listen to her Internet-famous "I Am the Fat Girl" poem, or see her cry about dolphins, or even to watch her prove how she peaked in childhood. There are even some Fluttershy vlogs you can check out where she acts like a giant infant, guzzles chocolate milk, and creates cartoons with webcam software to showcase her obsession with high school drama. What you do with your downtime is your own business. But I've at least linked to the videos in the headings of this article just in case someone got their oversized novelty panties in a bunch over being made fun of on the Internet. For now, let's move forward, something Fluttershy hasn't been able to do without the use of a downward slope since 1996.

When you heard the first line of this vlog, your initial reaction should have been to scream and jump through the nearest plate glass window. Then, you probably thought, "Wait, there's no way that much mass could occupy a single space." At last, you decided, "Holy shit, I've really let myself go." Will I personally ever get close enough to smell Fluttershy's hair? The answer, sadly, is no. I can go out and stick my head in the dumpster of a local McDonald's, which would produce the same effect, but I'll still miss out on feeling bad about calling her fat and worthless over the Internet. And if I looked in her eyes, I wouldn't see the reflection of the moon, but I would see the dead pupils of someone still thinking of the ultimate comeback for the time when someone yanked her sweatpants down during an eigth grade social studies class. Even if she is me, we disagree on the fundamental fact that she's a waste of flesh whose mass could easily be divided to create five healthy, non-vlogging people.