At a Glance: If you’re like me, you have fond childhood memories of watching American Gladiators, or at least watching the first five seconds of it before deciding to turn on the Nintendo and play Battletoads instead. It’s bad enough that apparently some TV station executive, after spending two straight days inhaling deeply from a bucket full of chopped-up permanent markers, decided he really liked the idea of paying two people to go on live TV and participate in a series of really pointless pseudo-sports against a gang of 350-pound ‘athletes’ who spend the majority of their on-screen time flexing and blinding the audience with their shiny biceps. But what’s even worse is that a group of geniuses called Incredible Technologies decided to ignore both the stupidity of the show and the rarely-broken “games based on TV shows are always complete shit” rule, and scrape together a big festering fly-attracting clump of minigames that manage to rival Ehrgeiz’s minigames in sheer frustration and tedium. Hooray! 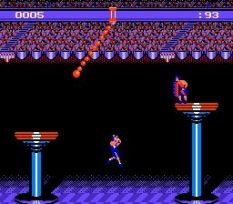 I would not recommend using this technique if you want to win the Human Cannonball event.

There are a total of five different minigames in level 1, which was as far as I got. They all help remind me of what American Gladiators was like, and they also make me wonder why TNN hasn’t picked the show up to sandwich in between ‘Slamball’ and old Roller Derby reruns. And right after writing that sentence I got curious, checked out tvguide.com, and found out that TNN actually is running American Gladiators now. How swell.

Assault: This minigame is based on the event where the contestants fire little wimpy nerf weapons while the gladiators use an atomic fusion powered cannon to blast solid uranium spheres at them at a high enough rate of speed to cause concussions and compound fractures whenever one hits in their general area. I should stress that it’s based very, very loosely on this event, since the NES version involves plodding through a square arena firing giant plastic missiles at a gladiator who constantly backs away from you in a moving tank that spends the entire time spastically jolting back and forth like a cocaine addict who accidentally snorted a line of cracked pepper. This event is incredibly easy, since the enemy’s shots barely travel fast enough to push the air molecules in front of them out of the way and you only need to hit him three times. Once you do that, his tank blows up and you win. They would have run out of gladiators fairly quickly on the show if the Assault event was actually like that. 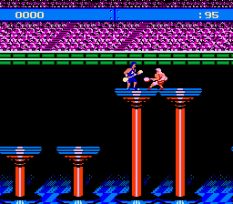 Here's a picture of me (on the left) standing there wondering why my opponent is striking such a stupid pose.

Human Cannonball: Who can honestly say they haven’t dreamt of grabbing onto a rope, swinging through the air, colliding with a guy holding a big foam pillow and knocking him screaming from the ledge he was standing on? I can, but I don’t think any of you readers can because quite frankly you’re all a bunch of freaks. So now you freaks can make all your freaky little freakball dreams come true with the Human Cannonball event. This one is even easier to beat than Assault, although I don’t remember this event from the show at all. Just walk to the right of the platform and hit A when the rope swings above you. You’ll jump up and grab on, then swing toward the enemy gladiator, at which point you hit A again to let go and knock him off the platform. The gladiator then flies backwards off the screen, accompanied by a sound effect that sounds like an elderly man screaming while being kicked in the groin with a steel-toed boot and having all his nose hair ripped out, only it’s significantly more shrill and annoying and it’s sampled at 0.2 Khz.

Joust: Joust is the rousing and epic tale of a contestant’s noble quest to jump between a hundred little platforms and whack his enemies on the head with a giant q-tip. You may have trouble with this event at first, due to the enemy utilizing a devastating technique known as “standing there doing nothing.” When he’s just sitting there motionless, you can walk right up and swing at his head, only to have it go right through him without hurting him at all, a la the sword from Hook. All you have to do is wait for him to make a move, then pound the A button to start swabbing the shit out of your opponent. After you knock him off the edge, you hop to the next platform and fight someone else, then continue this cycle until the game decides that you won. Every time a gladiator falls the game plays that same annoying exaggerated screaming-in-agony effect, only you won’t notice because by the third or fourth opponent you’ll be perfectly duplicating that sound effect at the top of your lungs.

Powerball: This event faithfully recreates the exciting challenge of taking soccer balls and putting them in really big bowls from six inches away. You have to run from one side of the field to the other, picking up a soccer ball each time, and put one ball in each of five gourds. There are gladiators running around the field, and if you so much as touch one of them you drop the ball, since apparently your guy is a big wuss. However, you shouldn’t worry too much about getting hit by the gladiators, since whenever they try to change directions they skid around as if the field were made entirely of banana peels. 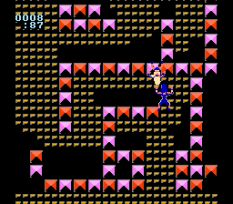 It's kind of hard to tell, but I'm on the right side of the screen falling victim to the Gold Kamikaze Gladiator of Doom.

The Wall: If, for some reason, you don’t enjoy frantically climbing up an 800-foot wall while a gang of paid bodybuilders tries to throw you off, the event known as ‘The Wall’ is probably not for you. This event consists entirely of hitting ABABABAB as quickly as humanly possible while holding a direction on the control pad to tell your guy which way to climb. That’s about all there is to it, and it helps that anybody with functional hands can make the guy climb up the wall faster than most people can fall down a wall. Just watch out for the crafty gladiators; they’ll climb up above you and jump off the wall while doing backflips, just so they can land on you and take you out. Those sneaky bastards.

Those are all the events you start with. I assume after beating all of them you can go on to the Eliminator or something, but I really didn’t want to play long enough to find out.

Weapons: For the most part, your brave little contestant doesn’t need any weapons to assist him in his eternal struggle against the evil tyrannical gladiators. He does occasionally need plastic nerf rockets and giant cotton swabs to help him out, but so does everyone at some point in their lives.

Enemies: The gladiators have a number of ingenious attack methods that they use to thwart you. These methods include holding up a foam block for you to run into, ice skating around on a field that isn’t even made of ice, jumping off a wall and doing a suicide backflip drop to try and knock you off, and firing little red pellets that travel at the rate of approximately eight inches per second. Needless to say, these aren’t the most intimidating enemies in the world.

Number of levels: Five. Unless you mean ‘number of levels you will be able to play before throwing your Nintendo in front of a moving tank’, in which case I would say ‘zero.’

Number of bosses: None that I saw. Maybe I just missed the secret level where Nitro shows up in a jetpack suit with a robotic arm that shoots missiles and lasers.

Defining moment: Hearing some of the truly profound things the gladiators had to say, such as “I’m the master blaster” and “Just another day on the ranch.”