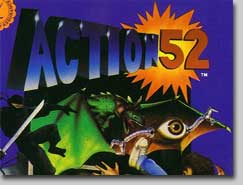 At a Glance: Forget Super Mario All-Stars, Ninja Gaiden Trilogy, Arc the Lad Collection, or any other collection of games in one package. How would you like to have no less than FIFTY-TWO games in one package? No, really! This isn't a pirated however-many-other-games-in-one hack, this is a real, honest to God game with fifty-two wonderful original games in one package! And by "one package" I mean "one NES cart." And by "wonderful" I obviously mean "outrageously shitty."

"Shooting Gallery" is just that. A shooting gallery. No enemies that can kill you, no way to die or to progress in levels, nothing but targets wandering around aimlessly on the top part of the screen while you shoot at them with threatening-looking pink lines from the bottom.

Game Plot: With the exception of "Cheetahmen," which I'll talk about later, there is no plot. There is no real game, either. I'm not even sure there's a game card inside the plastic covering. You know those games that have secret unlockable minigames in them? Usually you see them in advanced 3D spinoffs of game series that started with crappy ancient arcade games, the same crappy ancient arcade games which you can unlock. Like the minigame thing of the Atari version of Pitfall in the SNES "game" Super Pitfall. Or the original Donkey Kong arcade game you can get in some N64 Donkey Kong Country game that I never paid attention to because I hate Donkey Kong Country. You know, things like that. Usually you found them to be sort of entertaining for a few seconds, and then you realized that they're horribly lame compared to the actual main game you're supposed to be playing (unless we're talking about Super Pitfall) and then you quit and go back to the main game. Well, picture fifty-two of these lame time-wasting minigames stitched together with a three-page menu and no main game, go back to when you realized how much all minigames suck, and kazaam, you have Action 52.

Cheetahmen is the crowning achievement of this game package. Active Enterprises Ltd. (which was really one guy coding QuickBASIC games in his parents' garage and his AD&D buddies doing distribution afterwards) decided they needed something that remotely resembles a game before they start retailing their achievement for two hundred dollars. I'm not kidding when I say that price. Now, I want all of you to stop and really think, trying your best to wrap your mind around the concept of paying two hundred dollars for 52 "games" that are about the quality one would expect when you have 52 different minigames competing for the memory and resources of one single NES cart. Can't quite grasp that? Neither can I. But at least you tried. Anyway, they saved their best for last, putting Cheetahmen as game #52 in this 52-piece ensemble of crap.

Cheetahmen is a rehash of the other 51 games. You know how they were too lazy to do the final episode of Seinfeld, so they took stock footage from all the other episodes and compiled it to a big nostalgia trip to relive your journey through the whole series? Well, Action 52 does this with Cheetahmen. How do they do this? Well, they take a game that wants to be a furry Final Fight when it grows up, and they copy/paste enemies from all the other games into it. Yes, even the shooter-wannabes have enemies lifted for Cheetahmen, so don't be surprised when you see UFOs and spaceships and things like that that are about the size of your fist as you walk around the crudely drawn Cheetahmen terrain.

In "Chill Out," you play a blue nun who has received orders from the pope that grey nuns are heathens and need to be executed by having weird white things shot at them. Snow and ice and winter and stuff are somehow also involved.

Cheetahmen's plot... well, let me just share the text of the introduction of it with you. Keep in mind that this is the only game of the 52 that has an introduction, because this is Active's crowning achievement. I think the work they put into this brilliant intro says more about the plot of cheetahmen than I ever could, so here it is, typos and poor sentence structure perfectly preserved:

"The Action Gamemaster was at home playing his videogame. When suddenly... An arm reached out of the TV and pulled him inside.... When he looked up he saw three gigantic yellow bodies. It was the cheetahmen.... He begin to explain.... The cheetahmen told of the enemies here in game world. Dont worry we will fight for you... The cheetahmen ran off.... ....and now.... the cheetahmen"

Now who wouldn't want to pay $200 for something like that?.

Weapons: It depends on the game, but it's usually safe to assume that you shoot at bad guys with a threatening pixel or line of a certain color that makes them do a cheesy exploding animation when it hits them. Most enemies do the exact same thing to you.

Enemies: It varies from game to game, so you have to either play them all or just play Cheetahmen. Though since a good two thirds of the games in A52 are shitty shooters (half of those being the side-scrolling R-Type wannabe type, the other half being the vertical-scrolling 1942 wannabe type,) most of the enemies are things like poorly drawn UFOs, enemy ships, and so on. The most creative (though not in a good way) shooter was a 1942 wannabe named "Space Dreams," in which you were a space binky of doom, and you flew around shooting up evil cute things that one would normally find inside a baby crib, to the tune of happy baby music. In that game, you fought teddy bears, blocks, safety pins, and other tools of evil. Oh, and they all shot at you.

But A52 would be unoriginal if it was nothing but graphics-swapped shooter games. Because you really want to get value for the $200 you were supposed to spend on this game, Active was creative enough to only do that with two thirds of the games, with the other third being... PLATFORM GAMES! Yes, those of you who feel like Active took a giant piss on the R-Type and 1942 can soothe their minds with the fact that they got Super Mario Bros. while they were at it. Rejoice. In the platform games, there are too many types of weird hideously drawn enemies to even mention, so just play Cheetahmen to see them all.

Just in case any readers happen to have some kind of furry foot fetish. Actually, nevermind, NO ONE could find something with graphics this poor exciting.

Number of Levels: There are 52 games. Each game has a bunch of levels. I never reached an end to any of them, I think they were just randomly generated forever. And I didn't even have to make it to level 125 to figure that out like I did with Galaga, either.

Pay special attention to the plainness of the scenery at the spots where levels begin and end. Such notions as ending shooter-type levels with a boss, or platformers with a castle or flag to raise, or at least something to let you know you finished the level, had been done already, so Active decided to be revolutionary and scrap that system altogether. Instead, you literally walk forward, seeing nothing different or out of the ordinary at all (oftentimes with generated enemies waiting for you on the other side of the screen, making you think you're supposed to keep going) and then all the sudden the screen blacks out, and the text "LEVEL 2" appears. Goodness, did you just finish a level? Why, I think you just did! The game gives you a good five seconds to let that realization sink in before setting you'd own in an equally nondescript spot at the beginning of the next generated level. And remember, this is for all 52 games. Even Cheetahmen.

Number of Bosses: There was a game called "Boss" which was supposedly about an anthro lizard (you know, a furry only a lizard instead of anything with fur) that's working for the Mafia or something, which you can get about half a screen into before there's this spot that's completely impossible to pass. Aside from that, I didn't even try to keep track of bosses that could be in any of the levels of any of the 52 games.

Defining Moment: Seeing the instruction manual and realizing Active can type instruction manuals about as well as they can code games. It's not enough that the grammar structure suggests that the Active employee(s?) who wrote this manual went on to a successful career translating such titles as Macross and Zero Wing. No, they also had to throw in a couple descriptions for games that AREN'T EVEN THE RIGHT GAME just to be playful. For example, the instruction manual describes "Jigsaw" as basically a jigsaw puzzle game; you know, it splits up the picture and you put it back together. Then you go to PLAY "Jigsaw" and it's a shitty platformer with a five-pixel tall guy who sort of looks like a carpenter trying to make it to the end of the level dodging and jumping over evil animated tools that seem to have come alive just so they can dance back and forth in place just enough to make you miss jumps and make the game impossible. But if you ignore that and play this game long enough, then maybe, just maybe, like the retarded-looking crack addict from the cheetahmen intro, you may finally call yourself an Action Gamemaster.