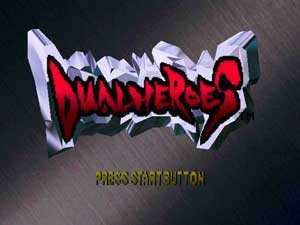 At a Glance: One of the most common complaints lodged against the Nintendo 64 was the lack of decent fighting games, as well as decent sports games, racing games, role-playing games, puzzle games, and action games. BUT IF YOU WANTED TO JUMP ON PLATFORMS AND COLLECT FORTY DIFFERENT KINDS OF SHIT IN THE LIMITLESS AMOUNT OF MARIO 64 CLONES RELEASED FOR THE SYSTEM THEN HOLY SHIT YOUR DREAMS CAME TRUE DIDN'T THEY?

However, those of us who were sick of Rare platformers had to make do with mediocre third-party offerings. Hudson Soft is ready to change all that with their 3D fighter Dual Heroes. Unfortunately they manage to fail miserably and the status quo remains unchallenged.

Got a suggestion? Email Kevin "The Goblin" Wilson because I don't wanna hear it! 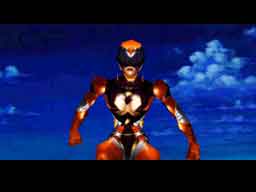 This Power Ranger is mad as hell and isn't going to take it anymore! Story: Frank Herbert eat your heart out! There's a new king of science fiction and it's name is Hudson Soft. Dual Heroes is generic sci-fi garbage at its finest. It's like Hudson took a science fiction story template and the game designers just inserted a bunch of sciency-sounding space words and jerked each other off for a job well done. Read Dual Heroes' epic storyline for yourself.

120 years ago, in preparation for the coming doom, mankind began an exodus to the manmade satellites in outer space. But the "Day of Judgment" arrived even before half the population had escaped to outer space. The shift in the tectonic plate caused the shape of the Pacific Ocean to change and a new continent was created.

Doom is coming! Doooooooooommmmmmm! I just got a phone call and they said Dracula might be coming too!

After a 100 years, the only inhabitable area were limited to the area around the new Pacific Ocean and the new continent. New nations were founded on this continent and mankind began rebuilding their lives. In the midst of rebuilding, "Gaiathyst" a mineral which releases an energy similar to gravity was discovered as a new source of endless energy.

For those of you in California I'm urging you to vote NO on Proposition 87! It'll only increase our dependence on foreign Gaiathyst and skyrocket the price of Gaiatholine for working families leading to a dreaded Gaiathyst war like in the video game!

The nations began to war with each other for domination, but conventional weapons were found useless due to the influence of the Gaiathyst. To fight under these conditions, the power suits used to mine Gaiathyst were improved for combat. But the "Gaiathyst War" came to an abrupt end by the invading forces of the Zodigierra Empire from outer space.

Oh no! Not the Zodigierra Empire! Those guys are bad news if you know what I'm saying.

After conquering the nations, Emperor ZORR creates the "SAP", a super gravity producing device. Orbiting over the new continent, the super gravity of the device, prohibits beings not wearing a power suit to exist under it. Protected by the super gravity, ZORR commands his empire from a tower under the SAP.

Standard sci-fi story: Mankind is threatened, bad guy shows up with a super weapon, and...

A few brave make a stand to defeat ZORR. They are the true Heroes!

Characters: Dual Heroes features a wide range of colorful characters that fight bravely against the evil Emperor ZORR. Every character has their own theme music and back story. Here are a few of my favorites. 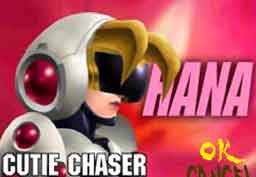 Hana: According to her bio, Hana was a botanist living in South Austreiria (these guys are great with the futuristic sci-fi place names huh?). Her home was largely unaffected by the great Gaiathyst War but when ZORR removed all the plant life things got a little too personal for Hana. What a hypocrite. She'll only get involved in environmental concerns if it affects her. She is also known as the "Cutie Chaser". A breakthrough role for females in video games.

Hoe: Hoe hails from Pong Kong, which was the first nation to utilize Gaiathyst after the "Day of Judgment" began. Hoe was a peace loving millionaire but when, you guessed it, the forces of Zodigierra showed up he decided to take them on. Hoe's blood type is B.

Juie: Juie is the most mysterious fighter because all of his bio facts are marked "Unknown". This is a technique game designers use to create mystery and also when they can't think of anything good. Juie was raised by aliens and now he wants revenge. 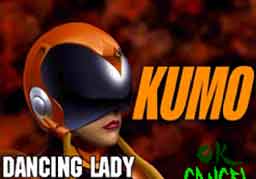 Kumo: Kumo is known as the Dancing Lady. Her blood type is A. She was a dancer at the "Mercury Theatre" but it was conquered by Zodigierra forces. Since then dancing and show business were banned from the area. In order to return her country to its former glory Kumo must dance for freedom! Sounds kind of like another one of my favorite games.

Gai: Gai is from Neo-Tokio (Yes, Tokio) and is the smartest person on Earth. He was on an expedition on Mars when Earth was attacked by the Zodigierra. Since his people are suffering he has to go defeat the evil Emperor ZORR. You know, if all of these people just want to defeat Emperor ZORR, why don't they work together instead of fighting each other? Can someone explain that one to me?

Gun: Gun lives in Guinbach. Once the most powerful military empire, it was conquered by Zodigierra. His occupation reads, I'm not kidding, spacy soldier. You know, because he's a soldier in space. Because his people are suffering Gun heads out to defeat so and so to blah blah blah...

The final boss, who I guess is supposed to be Emperor ZORR, is just as lame as the rest of the characters in the game. But he hides a terrible secret! The last boss isn't actually the last boss at all! He *gasps* morphs into something else! In this case he's an alien with dish plates stuck to his shoulders and head. Actually, they might be satellite dishes and still he can't good reception with DirecTV. The last boss also has the ability to disappear, but to be honest I'm not sure if that was supposed to happen or if the emulator was fucking up.

Of course like most great fighting games the character you pick has very little impact on the story. The endings are as disappointing as the setup. A generic sci-fi ending scrolls across the screen while your character stands on a mountain and looks out into the distance and contemplates why they weren't created for a better game. Then the credits roll and your character starts dancing. The end. Or is it? The ending sort of hints at a sequel but fortunately there was never a Dual Heroes 2.