Capcom and White Wolf wanted you to forget this abomination ever existed, but we're not going to let them! Back in 1994, White Wolf teamed up with the makers of the Street Fighter games to create one of the most ridiculous roleplaying game products ever devised. The concept combined White Wolf's then-innovative Storytelling System for tabletop RPGs, which emphasized story over combat, with Street Fighter, a video game series with basically no story and nothing but combat. The results were spectacularly...something. 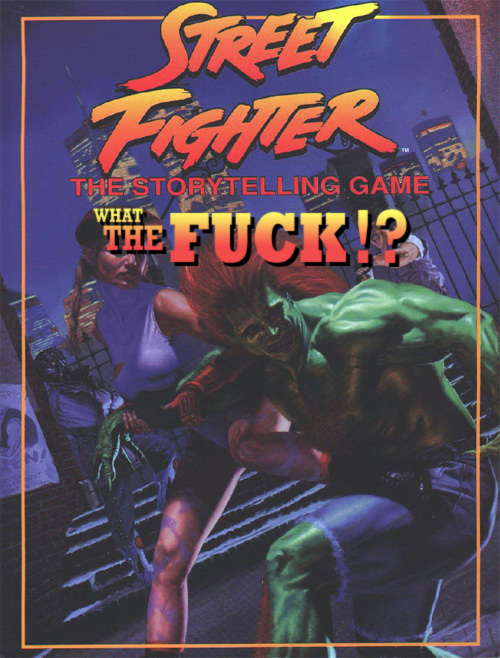 Zack: That cover is gonna produce one hell of a Missed Connections ad.

Steve: It must be New York. You can see the World Trade Center.

Zack: Green Machine - m4w - East Harlem - I was wearing nothing but jorts and a smile. You were in some weird swimsuit/beret outfit. You kicked me around, my mutant electricity shocked you through a fence. Some creepy guy in a mask watched. I felt IT. Did you?

Steve: I would date the heck out of Cammy. I bet she could teach me karate moves and then take out her boobs.

Steve: And her boobs would be amazing. Like the second or third best in the world ever.

Zack: She always reminded me of an R. Crumb character someone injected with steroids. Her and that thunder thighs Chun-Li. Do you think she could still kick ass without a head?

Steve: Where would you put the beret?

Zack: I'm sure we could come up with somewhere comically misogynistic.

Steve: How about in the kitchen?