At a Glance: I originally started playing Lester the Unlikely expecting to come across some abandoned franchise that never made it. Instead I found a thriving community that demanded more content from the character that spoke the most to them, just as Donkey Kong speaks clearly to the hearts of banana connisseurs, barrel smashers, and people who want to rape princesses. I quickly came across some startling news by following the numerous leads found about the internet: A SEQUEL WAS PLANNED. This news was bittersweet, however, because scrolling up to the immediate next update from Visual Concepts informed me the project had been canceled. What happened to this potentially solid game? Let's find out. 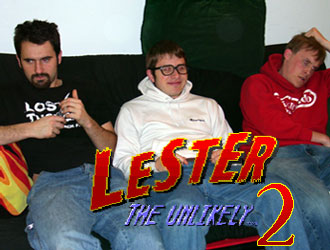 Early demo footage!Announced officially in 2005 but for some reason seldom heard, Visual Concepts told the world that yes, it would make a sequel to Lester the Unlikely entitled "Lester2: Urban Jungle". Lester would be taken from the environment of the first game (the jungle) and put in an entirely new and seldom used environment (a town).

Great efforts were made and many Bothans died to preserve the quality of Lester the Unlikely. Changes had to be made considering the effect brought about by years of ergonics, more efficient code, and the late 1999 development of "frontal lobes" into the drooling and bedwetting gaming world. Thanks can only go to the guidance of a one Professor Hammerhands, whose programs such as "smashing your hands with a hammer" gave the development staff the kind of hardcore resource they needed to keep the spirit of Lester the Unlikely alive.

Not only did Lester2 show slave-like detail to the recreation of Lester the Unlikely, but new content was developed to appease the people who would immediately crack it and freely distribute it on the internet. A new play mode would allow Lester to approach foes in a more civilized manner, engaging them in lengthy conversations about wonderful comic book fights between Squirrelgirl and Rainbow Rider, but also a vast database of brain-suckingly nothing conversations. Similar to most lock-picking minigames like those found in The Warriors and the Thief trilogy, each enemy would take a certain amount of time to "win over" or "creep out" based on if the player could effectively interject facts involving Lester's girlfriend. 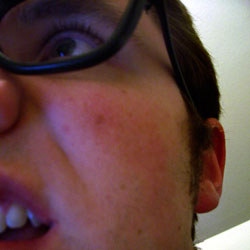 Look and act like a real nerd in DirectX1X.X!Statements like, "Well my girlfriend enjoys talking to me about..." and "man my girlfriend thinks it's hot when I do the Link voice..." have to be preformed to the buttons that appear on the screen. Hitting the buttons with expert precision would result in Lester adding "my asian girlfriend" for bonus damage.

"Lester2: Urban Jungle" put experimental technology to use that was ripped directly out of old furbies and fused using mental rays to their bodacious rigs (according to their website). With this they managed to create even more challenging enemies than turtles and crabs like players expierenced in the first game. How can you get more challenging than a sea turtle? OH DON'T GO THERE. Each game install did a background psychological check on the player, visited their favorite websites, chatted with their friends, and got to know their girlfriend (if they have one). After a few dates, proper enemies were determined based on their intelligence levels and skills. More often than not, sea turtles still appeared.

Just like the first game, you are given no supporting characters besides fabulous babes to save all the time. This is good becuase it helps to accent the mighty powers of those who apply their thinking and facial cream to any problem that is before them. Don't think that it's all the same stuff Lestermaniacs. New AudioX digital sound has been added to this game to bring about the cries of pain and complaint that erupt from Lester at every turn, just like the original - but better. Wish you could upgrade your girlfriend like thissssugggh?

Looks like we won him over!The use of rocks and boomerangs helped provide an atmosphere in the original Lester the Unlikely that clearly stated "this is survival of the fittest". No sequel could exist without giving Lester some new and lethal weaponry. Added to Lester's incredible arsenal was "sobbing", "complaining", "a shoe", "advanced complaining", "a stick", and "dignity". The last one is put in there to make everyone feel better about themselves when they realize they look a little like Lester.

A demo was eventually released and was a rounding success with people with mangled hands, the developer's parents, and their child slaves. In fact, female child slave Eseal Pempleh regarded this game as a "a prediction of the great things to come" and "please, spare me my life."But then started to take a darker turn. Bugs began to surface everywhere, even within the demo. The conversation play mode often worked too well and left players with intense feelings of depression and sudden compulsions towards athletics. And when rigorously applied to the face, it did not yield to remove ugliness despite the repeated promises from Visual Concepts.

Meetings dissolved into bitter arguments and intense nerf gun battles (one of which resulted brief hospitalization from an "N-Strike Secret Target Strike" suction cup to the eyeball). Blogs erupted in exclamation points. It seemed that the biggest enemy to Lester2 was the staff itself. Lester could reunite an indigenous people with their leader and courage, but could not reunite the development team with the thing that mattered - their hearts. 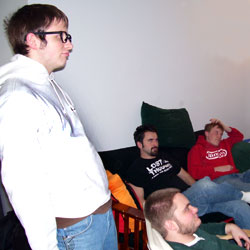 Astonishing realism!Then the bomb dropped. Production came to a standstill in 2005 over issues of character. Project manager Egbert Donaldson felt that Lester2 should include dialogue that would reveal Lester did indeed think a combination of Kirk and Alex Rogan, The Last Starfighter could single-handedly defeat the combined forces of the Drow and Captain Picard. Heated debate erupted within the development team, sparking numerous walkouts and one count of aggrevated assault with a "dri'let slaylord" dagger. NERD JOKE.

The shock hit the Lester the Unlikely community hard, but Lester the Unlikely 2 had too many problems for production to continue. Riots erupted at every comic shop, resulting in property damage that left many collector cards bent, chess pieces shattered, and heads noogied. Some even go so far as to declare this day a Klingon Day of Mourning, putting all elven flags at half mast.

With the sequel fully buried, Lester the Unlikely seems like it will fade into the dust of yesterday right now. It is my diligent hope that by putting this up here that some of you may sign a petition somewhere demanding the return of the Lester2 project. Perhaps, like Earthbound, it will return again like a dark skeletal horse from the mists of Ravenloth.

We can only hope&. 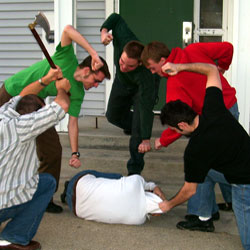 Live out your fantasy life in Lester2: URBAN JUNGLE!

&.that we have enough skill points to learn "kill horse" and cast the spell without failing our "wiggle your fingers" check and "saying words" check and your "mantits" check.