=UPDATE: IT WOULD SEEM AS THOUGH THE ONLY THING THAT IS "IMPOSSIBLE" IS ME GETTING ANYTHING RIGHT!!!!!! Approximately 20,001 people who take utmost pride in their knowledge of screen-media-chronology-type-things have sent me spittle-flecked emails letting me know that I am a despicable turd of a human being. They are correct, so READER BEWARE: In the following review I erroneously suppose this game is based on the 1990s film "Mission: Impossible," whereas in fact it is based on that beloved series from the 1970s, "Happy Days." I have no idea how I committed this journalism war crime, because I fuckin' love Opie.= 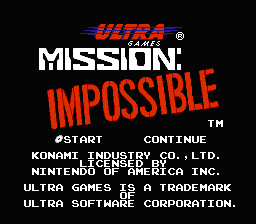 At a Glance: This one goes out to all the ladies (and gay dudes I suppose.) Remember when you could go see a Tom Cruise movie and say "Damn, is he fine" without feeling the need for honor-preserving suicide? Before you noticed his gleaming white incisors are in fact aligned freakishly? When that asscrack slip scene in Far and Away made you feel funny in the front of your pants, not your sphincter? When you could watch him prance around sans trousers with a bunch of unicorns and go "man there is no closet deep enough" without fearing an army of savage Attack Lawyers would materialize at your door? Tom Cruise is dead to me.

Story: I don't tend to be interested in action movies unless they involve a) dinosaurs, b) Brendan Fraiser crinkling his face like he's just been punched in the nads, or c) an absence of Tom Cruise. Thus, how faithful M: I is to the movie I don't know, but I'm pretty sure you're James Bond's retarded cousin in both. Sexologist "Dr. O" and his sultry sidekick have been kidnapped by an organization with a name straight out of a Final Fantasy fanfic. You and your crack team of stereotypes have been given a mission to rescue them. Good thing Grandpa included the trademark "should you decide to accept it" bit, because I've decided to let those deviants rot in Hell.

Gameplay: With two exceptions, the levels consist of wandering around in massive, multi-floored areas, trying to solve inane puzzles while sprites beat the shit out of you. There is little rhyme or reason to these "challenges"; they involve card keys, mazes, and switches that Sherlock Holmes couldn't find on a goddamn amphetamine high. Oh sure, there are NPCs that give you "hints," but they are as cryptic as they are useless; hey, thanks for telling me to destroy a statue in the fucking museum level!

Much like tacking on a water slide to a concentration camp, they decided to add a gimmick to Mission:Impossible to make it "more fun." You can switch between three characters, each with their own racist abilities: 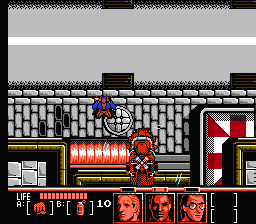 There's a lot of despair in this game.honest to God, the white guy has a rifle, the black guy is athletic and punches the crap out of things, and the gay Australian uses a boomerang and a theater kit. If one of your ACLU members dies, you can't use him til the next level, but I wouldn't worry about it too much, as you're 33% less likely to be arrested for hate crimes.

Graphics: Not terrible, but as in Robin Hood, we once again have the top-down Scalp Cam, and the color scheme tends to look like something out of Jimi Hendrix's final moments. It's often difficult to tell what the hazards are -is this sewage, or a conveyor belt? Is this a different-colored platform, or bullshit that will send me plummeting to my death? Oh, and let's not forget that the screen occasionally vibrates for no apparent reason!

Difficulty: The worst since Ninja Crusaders. You may have a health bar, but the projectile-spewing enemies like hiding in crevasses and firing on an angle -something you, personally, cannot do, and thus you will never hit them! Worse, everything and her second cousin Betty causes death. Seriously, goddamn the hazards. Whether 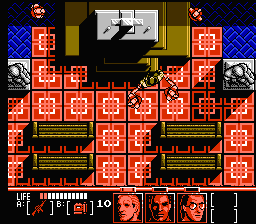 The Senior Ladies' Bingo Club is going to fuck. you. UP.it's a fucking bottomless pit that materializes in front of you while racing down a hill, or just a good old-fashioned police beating, this game enjoys seeing you cry, then taking pictures of it and emailing them to that pretty girl who used to make fun of your animes in fourth grade. The "puzzles" require only an extreme pain threshhold as you rely on Jesus H. Christ to guide you to Switch #2342342341 and passcodes from people that, apparently dependent on the current phase of Mars, may or may not decide to murder you outright. This is as much a test of skill as seeing how long you can bash yourself in the eye socket with a rock. Let's Play!

Fun: This is another proud addition to the clusterfuck genre, where nothing is enjoyable and everything kills the shit out of you, shoves the shit back in an orifice of its choice, and proceeds to kill the shit out of you again. A staple of Nintendo days, the levels are overly long and stupidly complicated, which again makes me wonder: Did kids actually subject themselves to this crap for the necessary hours back then, rather than screaming and chucking the cartridge into the family cat? The game hates you in the same way Silent Hill does, in that it would be annoying to solve increasingly illogical "puzzles" without the ever-present specter of rape over your head. But at least

[remember to put a clever women drivers joke here before you publish the article!!]Silent Hill has hideous fleshbeasts with which to scare your younger siblings; Mission: Impossible just gives you racism and Tom Cruise, the Poor Man's Pyramid Head.

Defining Moment: There is all kinds of garbage that is memorable, but what really defined the game was when I killed my way into a tiny room and found a new kind of enemy. Cautiously, I advanced for more killing, but was promptly assaulted by a legion of puttymen and chewed to death before I could blink. As it happened, those were sentrybots, and I was supposed to sneak past them using the black guy and destroy a switch that did... nothing, except for remove all of the bad guys I already fucking killed in order to get to this goddamn room. It's a pretty good summation of Mission: Impossible: Excitement! Exploration! Excruciating death!