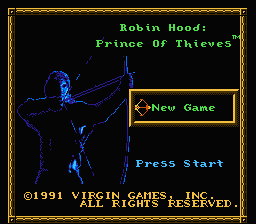 At a Glance: And here I thought Sword of Sodan had cornered the market on Ye Olde Dumbshittery! I never did see the movie Robin Hood: Prince of Thieves, but I vaguely remember watching bits and pieces of it as a wee four year old lass looking over my mother's shoulder. Come to think of it, she was desperately trying to get me to leave the room the entire time, in between bouts of getting all hot and bothered by Kevin Costner... goddammit, I knew I'd repressed my memories of that movie for a reason. Thanks for a great start, Robin Hood!

Watch this animation loop for about four hours and you will know what it feels like to play through this game.Story: Well supposedly it's about the adventures of Robin Hood and his Band of Merry Men, a subject which I found awesome as a drooling child, having been raised on sophisticated novel adaptions. I mean, what could be cooler than running around in your back yard, smacking the neighbor children with sticks and then destroying their possessions when they refuse to play with you? (Protip: This is also fun when you are an adult!) Unfortunately, I did not steal from the rich and/or give to the poor once in this game, and the "plot" follows an entirely non-awesome cyclical formula, beginning at your camp:

Gameplay: It artfully combines the tedious action menus of old-school adventure games with the uninspired dialogue and the party members/HP/experience points mechanic of the RPG. When I was a kid, I played more RPGs than that creepy "bisexual" girl in your 8th grade drama class, and I assure you this is one of the worst menu systems I have ever seen. For example, if you actually manage to poke someone to death, the game doesn't assume you want to loot his corpse for precious apples and band-aids. Nope, first you must "search" the corpse, then you must "take" the object, and then you can check the "Player" menu to see whose inventory it's in and v.e.r.y. s.l.o.w.l.y. drag it to the "Use" or "Eat" icon, at which point it's time to head down and pick up your first Social Security check. What's beautiful about healing is

Drama!that there is absolutely no fucking way to tell what anyone's max hit points are, which would routinely cause me to summon crack surgical teams for a paper cut.

"Tedious" summarizes the game in a bland, unnoticeable nutshell. Oh, by the way, it gifts you with not one but three shitty modes of combat. We'll get to them in a minute.

Graphics: Despite the entertaining animation that plays whenever you kill someone, this may be the first time I've been physically repulsed by a game's graphics. Right off the bat, the palette is absolutely hideous, with shades such as Kidney Gunk Green and Used Sanitary Napkin Brown. Secondly, they manage to fuck up the above-down camera angle, giving me a fantastic view of the top of Robin's body for four and a half riveting hours. While this POV was sort of necessary in the day, most games would bend the laws of perspective somewhat so that you had something to look at. But why do that when you can have All Scalp, All the Time?! At least they get Comedy Points for attempting to use the NES engine to realistically render the actors' faces, which came out looking like a PSA against the dangers of incest. Technically, I've seen much worse, but Robin Hood just rubs me the wrong way.

Battle: There are, for whatever reason, three different killin' modes:

World Map: The main combat method, you poke enemies with your weaponry by hitting A or B. How annoying this is depends on what weapon you have, but it's never fun being swarmed by an endless parade of angry pixels in a small corridor. The horrible controls make it difficult to even face the enemies with the sword, but once you get the staff, you can just hold down A and go make a sammich. I thought I'd finally found a game with minimal projectiles, but toward the end, my dreams were shattered as EVERYONE AND THEIR FUCKING FURSONA GETS A FUCKING CROSSBOW JESUS H. CHRIST WHAT IS WITH GAMES AND PROJECTILES FUCKING REPEAL VIDEO GAME LAND'S SECOND AMENDMENT ARGH.

Party Mode: Dramatic music plays as tiny little ants that may or may not be your party members poke at other slightly different-colored ants. Your friends are supposed to "help" you kill the enemy, but the awful AI makes them borderline useless, sending them prancing into walls of arrows with gleeful abandon . It's clear that very, very little effort was put into this part of the game, as you can't tell how much hp you have, or even if the enemies' attacks are actually hitting you. By the way, this is the only part where your friends serve as anything more than a means to carry your stuff. Sounds good to me!

Duel Mode: You and one other enemy duel with state-of-the-art graphics. I guess it's supposed to be like a 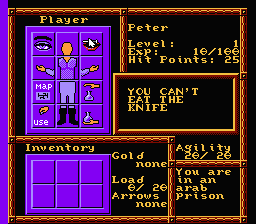 Why the FUCK not?fighting game, but the moves entirely consist of "jump awkwardly," "walk awkwardly," and "poke." There is absolutely no strategy involved beyond jamming A and hoping you win. Guess how often that happens. Go on. I'll wait.

Fun: I used to love a good RPG, because nothing says "interactive" like reading walls of text. These are hateful walls of text though, and the characters' personalities range from "confused" to "racist." Kids whose witless parents purchased Robin Hood for them could have conceivably been enthralled by it, but only if they were too inbred to know the meaning of the words "horrible," "awful," or "fermented toad semen." Alas, let's just hope those little darlings don't play it again now they're grown, else they suddenly will be visiting Mom and Dad in the nursing home to cut their oxygen tubes. I suppose it could technically be considered hard -you only get two continues- but the fact that the difficulty stems from bad controls and design rather than aliens on steroids made me more bored than frustrated.

Defining Moment: My jihad against the "Boar Boss." See, there's a glitch that lets you kill this huge piggy over and over again, for 10 exp. per kill. Although this is more magical adventure points than granted by the average enemy, you still have to kill it 50-100 times, at ten seconds per kill (thanks, staff!), to get to a high enough level for MAX HP. It says a lot for Robin Hood: Prince of Thieves that I was willing to go through this monotonous task for ten straight minutes in order to make the part of the game you were actually supposed to like go by more quickly.