As you know, studios simply must cram in all their biggest releases before the new year sneaks up on them. With that in mind, we perform an impossible mission, meet a girl with a striking tattoo, take a horse to war, buy a zoo and stay up really late. Next time I will make more casual wordplay jokes with movie titles, how does that sound?

EXPECTATIONS: I'm a big fan of the Mission: Impossible movies. As a response to the mid-'90s reinvention of James Bond, the first Mission: Impossible was a lovingly nonsensical take on the television series of the same name. Since then, the franchise has become a spectacular vehicle for its star Tom Cruise and an excellent way for up-and-coming action directors to show their true colours.

REALITY: In an ideal world, every generic, overblown, big-budget action film would be as good as Mission: Impossible - Ghost Protocol. What I mean by that is this film feels very familiar and formulaic, there is very little in the way of emotional investment, and yet it is an exhilarating experience. Something I wish could be said of the Transformers films or any number of superhero movies. 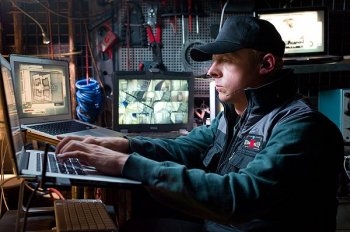 There's no I in team, but there are four Is in Mission: Impossible, which is a movie about a team.After being implicated in the bombing of the Kremlin, Ethan Hunt (Tom Cruise) and the rest of Impossible Mission Force team (Simon Pegg, Paula Patton, Jeremy Renner) must stop rogue Russian agent Hendricks (Michael Nyqvist) from acquiring nuclear launch codes and kicking off an all-out nuclear war between America and Russia. To do this, they must engage in all manner of running, jumping, fighting, shooting, hacking and all-around super-spying to get to their goal.

For all their inflated budgets, it seems that films like this are a dime-a-dozen these days, forcing filmmakers to strive to elevate their own genre entries any way they can. Sherlock Holmes does this by placing heavy emphasis on character development; Mission: Impossible throws character development out of the highest window in the world for the sake of seeing what it does on the way down. The characters here are established early on and basically do little more than behave consistently in every scene. You have the intense one, the funny one, the mysterious one and the obligatory seductive female one. They occasionally have small emotional dilemmas, but never anything that threatens to stop the rollercoaster, and so everyone simply does what they are expected to do at all times.

Spoiler: he falls and dies.

Thankfully, all of that works in the favour of the action, which is very much worthy of the franchise. Lots of acrobatic stunts are required for the team to get into various computer server rooms, including a scene that is very reminiscent of Die Hard's fire-hose scene. Every setpiece leads to an even bigger setpiece and it becomes absolutely mesmerising to watch, all the time wondering just how far they can take it. The answer is that they can take it pretty bloody far, leaping from a building into a fistfight before jumping into a car chase in the middle of a sandstorm. 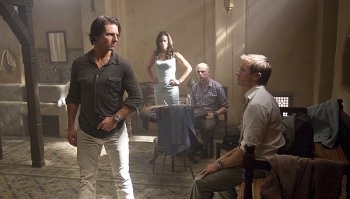 All four of us are in the same room, time to advance the plot.The problem is that at some point it all has to wind down and all the characters have to start talking about how to advance the plot. At this stage, it suddenly hits us that when these guys aren't blowing things up, shooting bad guys and jumping off things, they're barely worth watching at all. Gone is the intimacy of Mission: Impossible III, which was about the trials and tribulations of maintaining a job shrouded in secrecy in the early days of a marriage. Now we're back in James Bond territory, where nothing really matters on a personal level. It's surprising how difficult it can be to care about the fate of the entire world when you're not that interested in the people trying to save it. Even Renner's "mysterious one" loses all of his mystique about halfway through the film when he explains his entire mysterious backstory. Suddenly, he becomes a very innocuous figure who has no bearing on the plot besides being required to jump off something at some point.

Happily, I can't blame any of this on the director. Pixar giant Brad Bird has proven that he can handle actors and real locations just as well as he can handle animation. In one particular scene, he shows his skill in parallel storytelling as the villain explains his plot and Cruise gets busy and we learn a little about Renner's character all at the same time. With better material, this would have been an amazing scene, but all it does here is show us that this is an incredibly well-directed film with a not-so-great script at its heart. Bird has taken a very slim premise with very thin characterisation and made one of the best action-adventure blockbusters of the year out of it.