Shiplog of the U.S.S. Prokofy Neva

Saturday, Nov 04, 2006 by Ensign Chris "Petey" Peterson
New to the Second Life Safari? Refer to this article for a quick rundown. 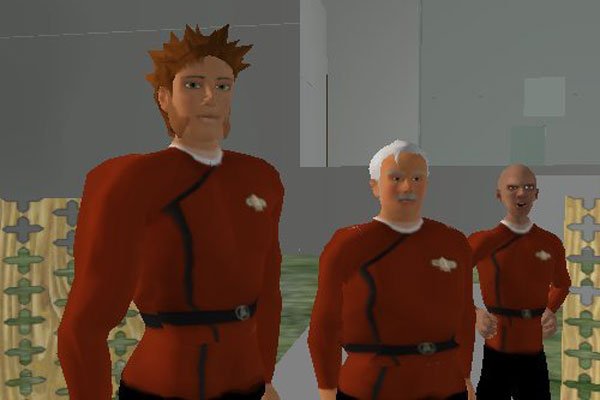 In our everlasting quest to document the myriad forms of life and culture this fruitful universe has to offer, the U.S.S. Prokofy Neva has discovered its fair share of peculiarities. Indeed, these starry nights have seen queer sights, but the queerest I ever did see was the night on the marge of Lake LeBarge when we cremated Ensign McGee. Tragic, really—but then again, I warned him against fornicating with the unicorns of the Bleblam cluster.

But aside from that isolated incident, the recently completed voyage to Star System 21394—whose inhabitants inexplicably refer to it as “Second Life”—has surpassed all other expeditions in sheer strangeness. This planet is haunted by the insubstantial doppelgangers of beings from other worlds. As far as I can tell, they have sacrificed their souls and lives in their home galaxy for this intangible existence. It is imperative that we understand these sad, sad beings, so that if their sickness begins to spread we shall have some knowledge of the enemy.

As is standard Starfleet protocol, we have supplanted our Shiplog 2.0 entry with multimedia evidence. The journey ahead is not for the faint of heart, and only those willing to sacrifice some modicum of sanity for the sake of knowledge should venture forth. Those lacking in time or fortitude can watch a short video our intrepid crew took with their communicators, which are now integrated with the limitless video databases of Google Interstellar.

Still hunger for more galactic drama? Set your phasers to kill and come join the crew of the U.S.S. Prokofy Neva on their harrowing journey. But watch out for the hyperlinks—clicking them will teleport you to the regions of which we speak, and that is an experience no man should have to face!