In an unexpected display of open-mindedness, our groundskeeping staff have removed all traditional markings from the asphalt of the employee parking lot. These oppressive symbols of fascism have been replaced by anti-establishment mantras and a series of completely confusing spirals which will likely mean the death of you. Really though, isn't it better to die free than to park as a slave? Special thanks this week go to: Tom "Smoking Dragon" Clancy and Don "Motorcycle" Jolly.

As part of StateOg's continuing commitment to helping out in the community we've purchased the local peewee baseball team the Sanford Spartans! In a joint deal with the city of Sanford and StateOg's pharmaceutical division we've changed the team name to “The Rage” and made some changes we feel will make this the winningest group of third graders ever to occupy the tri-city area! Thanks to some embarrassing pictures and court ordered community service we were able to get major leaguer baseball Joey “Shrunkenballs” McCanty to coach and train the kids. With a strict, scientific diet and rigorous training regime we've already beaten two of our rivals and sending most of their team to the hospital with our patented “hit the other players with bats” tactic. This training and diet has made created players with the skills and build of major leaguers! Here's a picture from our latest game with the Charlotte Canaries: 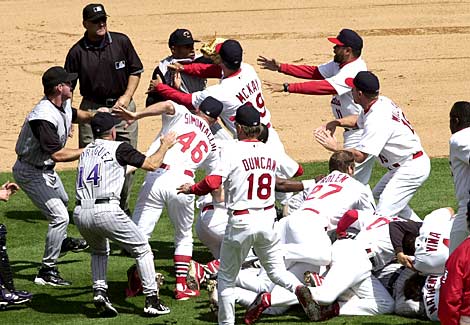 We play our arch rivals the Motor City Meatheads next week, be sure to come out and support your kids! Go Rage!!!

December 1st 1961 – If you'd had told me ten years ago that I'd be strapping myself into a rocket and flying past the sky, I'd have called you a “queer” and hit you with a motorcycle chain until you quit jawin'. But boy! You woulda been right!

I just got a letter from some nice folks called “State Og.” I guess they're with the government. But anyway, they says that I've been selected to test out their new rocket which will take me – and get ready for this – all the way to the moon! I don't know why they picked me, but the letter seems legit. And all kinds of doctors have been checking me and my wife out. My exams only take a few minutes, but my wife is getting a couple hours a day now. I guess they really want her to be mentally prepared for the big lift off.

I quit my job at the drugstore today so I can train for the rocket full time. So far, the training has been cutting grass at this big office building and dodging through traffic while my trainer watches. Is watch the right word? He's an old blind fella, but smart as a whip. I think maybe he's German – because he has a full color tattoo of Hitler on his face. These genius types sure are kooky!

December 10th 1961 – They say my training is nearly complete, so I have to be in quarantine. That means I have to sleep on the couch. It's pretty hard on my wife, so State Og sent in a couple of assistants who stay in the bedroom with her. Nice of them. I worry about her, sometimes. I wonder if she'll be okay while I'm on the moon?

Today I got trained to use the computer. The blind doctor sat me down in front of this big gray box with a lot of buttons and told me to start pressing. I pressed a big red one, and the box shot a damn bullet into my leg! I fell over, bleeding all over the cardboard “training” cockpit.

“Get up!” The doctor yelled. “Wrong button!”

I clenched real hard and pressed another one. This time I let some kind of animal out of the box – and it started tearing at my bullet wound like there was no tomorrow. I asked if I could get out, and the doctor started kicking me.

Being an Astronaut is hard, but in a week I'll be sticking it to the commies from the moon! Boy! I never thought a regular Joe like me would catch a break, but…

It just makes me happy, is all.

December 17th 1961 – Launch day! I drove out to the launch pad outside town, where the blind doctor told me to go. My wife was too sad, so she stayed at home with some of those State Og helper folks. It sure is nice of them to be there for her. I'll miss her, on the moon.

The launch pad was a pallet set up in an old drive in theater. The doctor and everybody was laughing pretty hard when I stretched the clear plastic sealant over the escape hatch, so I wouldn't get sucked into space. I wonder why?

Then the doctor counted down from 10, and everybody jumped behind crates. Next thing I knew, the rocket under me was sending me up at about a million miles an hour!

It was dark outside, and I could see the stars. I pressed a button on the computer, and a little spray bottle came up and shot something in my eye. Maybe this is the water system?

December 18th 1961 – I guess the radio isn't working, because I haven't heard from the doctor in a while. I think I need to hit the thrusters or something, but the last time I pressed a button on the computer it played a clip of my wife screaming and moaning with grief. There was a man there, too. Probably an agent come to console her. Poor little women. They just have no idea how hard being an astronaut is.

Outside, I can see the earth real big. I almost put on the space suit in the back, but I tore one of the arms trying to put it on. These space age materials look just like aluminum foil and cardboard! Truly, we live in the atom age.

I saw on the dials that my oxygen levels were pretty low, and my speed was closer to “turtle” than “rabbit.” My liberty rating was five point one, but I don't know what that means.

I tried to get oxygen tanks out of the back, but the storage bin was full of dead cats.

December 20th 1961 – I'm beginning to think that these State Og boys didn't think this through all the way. There's no food on the ship, and I can't figure how to get the computer to give any up.

I pressed a button yesterday, and then green stuff pored from the ceiling and a deep voice told me I'd been “slimed.”

Is this space food?

I don't know what to think anymore.

December 23rd 1961 – I finally got a radio transmission today. It was the blind doctor. He told me that they were sorry, and that the ship was having thruster problems. They're sending up another to get me soon. I can't wait to get back to my wife. She must have missed me terribly.

Note – Commander Crane's ship “The Og-1,” crashed into the Burmese jungle in 1982. He was, by this point, a skeleton in a space suit made of cardboard, aluminum foil and still-full TV dinners. Crane's body was worshipped as a thunder god by the simple pygmies for around ten years, until a State Og extraction team recovered it and the journal, and gave all the tribesman genital warts for good measure.