A Complete List of Dogs I Have Killed So Far: A Memoir 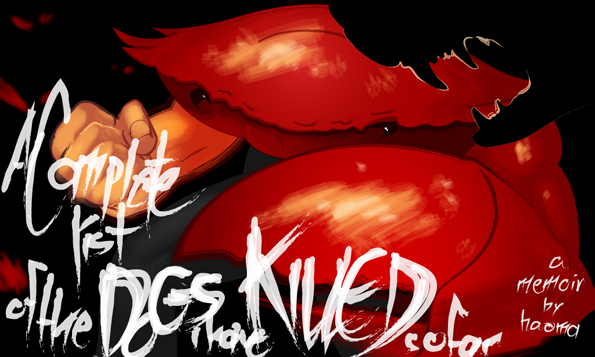 Once, I was walking back to my mud hut late at night (it was night time) and a dog attacked me with his sharp teeth. The teeth wanted to slice and dice my arms and perhaps torso -that is to say the dog controlling the teeth had this murderous intention- and the dog barked several times in an extremely dangerous way. To make a long story short, when the dog lunged towards me, teeth first, I swung my crab arm at it in a circular motion. (To specify, that is my left arm.) Actually, my whole body did a 360 degree spin with my crab arm acting like a hammer or some other blunt weapon. Or I guess it was more like what happens in a washing machine. Anyway, to sum it up: the dog was instantly knocked way the fuck down on the ground.

I thought to myself "It's fairly fucking possible the dog just stands right back up and fires its teeth at me again, possibly even at my torso." In a split second, I fired my knees at the ground next to the dog. When my knees made contact, I grabbed the dog by his throat and squeezed out the life in him, before his teeth could tear me up. He coughed, and wheezed, and I think was not breathing correctly due to my strangling actions, and finally, perished. He looked me in the eyes for a brief instant, as if asking, "Why are you currently strangling me?" To answer, I just looked down at his teeth, and then back in his eyes, as if to say, "To protect myself from your teeth." At that moment, there was a deep understanding between us. I buried the dog on top of a pile of garbage and lit the dog and garbage on fire with a piece of fire. 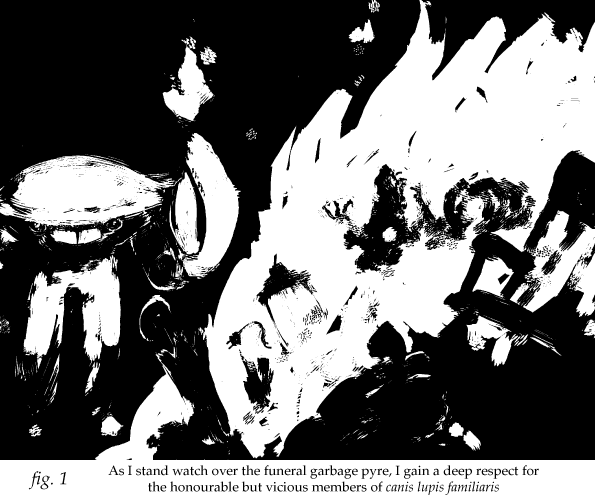 By March, I had upgraded my mud hut. The mud hut was now constructed of some kind of tree material; that is, I had killed some trees with a kind of thick knife (I do not know exactly what that is called) and put the tree bodies in stacks to mimic mud. Now at this new mud hut there was another dog who sometimes wanted to purchase or more likely steal the food I had accumulated and stored there to nourish myself.

To distinguish this dog from the previous dog, who was now very much dead and burnt to smithereens: This dog was a different dog. This second, alive dog, hereafter referred to as the dog, also had dangerous teeth but for whatever reason the creator decided to endow him with more control over his teeth-or, let's say-a more developed capacity for reason and as such a greater restraint from employing the dangerous teeth.

One day (it was day time), I returned home from dicing up vines (the purpose for which I will elaborate later in the narrative, do not forget this detail!) and witnessed the dog burrowing his body into my upgraded mud hut. I say burrowing to reinforce the malicious intentions this dog had toward me, my food, and my upgraded mud hut, but in reality there was no actual "burrowing" per se; the walls were of a dead tree materials and the floor, well... the floor was mud and could be burrowed into quite easily to be completely honest, but the dog was not burrowing into it at this point in time. The dog had entered through some other means, which is beyond the scope of this narrative.

Catching the dog red-handed, his gelatinous eyes fixed on my stored food, I decided to destroy his life before his teeth could rip apart my condensed milk, or maybe my torso if his mood changed. (There was also the potential he could fall haphazardly onto the floor from old age and afterward have to be cleaned up.) This time I had a medium-sized knife, which I used to dice vines (ring a bell?) in my right, non-crab arm; that is to say, my hand. This knife I used to dispatch the dog.