The wait is finally over! Declared vaporware by some, the action/RPG hybrid Bioshock has been released to the millions of gamers who have been following its progress since it was announced almost a decade ago. If you haven't already run out and purchased Bioshock you may want to hold that thought after reading our definitive review. Bioshock aims to go where no first person shooter has gone before. While it may occasionally dip into uncharted territory, it gets lost along the way.

Set in an underwater science laboratory called Rapture, Bioshock tells the story of Andrew Ryan, a man on his way to see his family when his plane inexplicably takes a nosedive into the Caribbean. There are miles and miles of water in every direction save for one solitary lighthouse that marks the entrance to a mysterious city where mankind has freed itself from capitalism and created an underwater utopia where every man answers to the state. 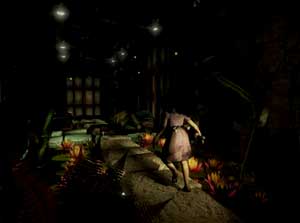 The visuals in Bioshock are at times hauntingly beautiful, when you can see them that is.The antagonist, based on the late Orson Welles, is bent on killing the player for infiltrating his underwater fortress and prevent him from getting away with its secret location. The enemy will send wave after wave of "Slicers", monsters that have mutated into horrible misshapen creatures due to their addiction to genetic enhancements known as plasmids. It is up to Ryan to solve the mystery of Rapture before it self-destructs and takes with it its legacy of evil.

The story, based on the science fiction novel Atlantis Shrugged by Ann Rand, sort of meanders throughout the course of the narrative and was confusing for this reviewer to follow. While the game touches on such subjects as life, death, and morality, it is never fully explained who Andrew Ryan was or how plasmids came to be.

Depending on how you play the game there are a total of five endings, including two "bad" endings that will result if the player does not satisfy certain mission requirements. The endings left very little closure to the story (to shamelessly leave room for a sequel I suspect) as opposed to a game like Halo 2 which ended on a satisfying cliffhanger.

The storyline, however, is not the reason why most gamers are going to pick Bioshock up. Much of the hype centers around the title's high-tech graphics. Built on the Unreal 2 engine, 2K did a good job depicting a vast, decaying underwater city. The water is the real star of the show, flowing seamlessly in real-time throughout every level. The architecture is rich with Victorian post-modern details that have a certain 1940s flair. I found myself strolling through the environments without a care in the world just soaking up the details, that is, when I could see them.

This game, quite simply, is dark. It makes Doom 3 look like Kameo. Darkness does not automatically give a game creepy atmosphere. It's just a crutch to hide lazy art direction. At least Doom 3 equipped the player with a flashlight. While the initial areas were amazing to look at, I had trouble navigating the dark generic hallways that were so persistent in the later stages. As the story progresses you'll find yourself crawling through pitch black air ducts that you've seen time and time again in better titles.

To call this game derivative is an understatement. Bioshock features the same run and gun gameplay you've seen a million times before dressed up in a prettier package. Same crate, same crowbar, different year. Early on during the tutorial you are actually told to "find a crowbar" to defend yourself with. 2K Games simply doesn't live up to their name as their gameplay is stuck in the early 90s. The hacking mini-game is a joke, ripped off directly from the coin-op classic, Pipe Dreams. 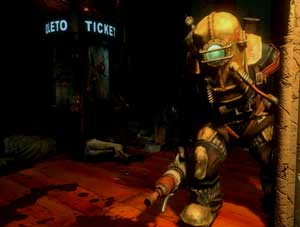 Run through a level, fight a boss, wash, rinse, repeat. Is this what passes for innovation these days?The weapon set is impressive though. Featuring a host of pistols, revolvers, shotguns, machine guns, rocket launchers, grenades, trip mines, and much more, you'll have no problem taking down these baddies. If that's not enough firepower power for you, new to the System Shock series are plasmids, magic spells that allow your character to shoot fireballs, electricity, and move objects with his mind. The game encourages you to mix and match weapons and plasmids to take out baddies in creative ways. Of course, all of these features would be worthless if the AI wasn't up to snuff, right?