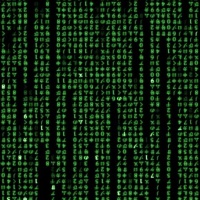 It's not just computer text. It's also code.The first Matrix film didn't expand my worldview. It established my worldview. The Matrix introduced concepts I had never thought about before: Reality, computers, religion, social issues. It's safe to say that I wouldn't be the person I am today without the movie.

I'd like to explain - to the best of my ability - just why it is that The Matrix has become the bedrock upon which my entire self identity sunbathes.

Neo Anderson is a normal guy. He does his job and at night he hacks the Matrix and puts it on cyber disks for street punks. Neo wonders if there's something more to life. Something involving a Matrix, perhaps? This is the first example of the film's foreshadowing.

Neo goes to a rave and gets a stomach ache. It's a mech worm. After a car chase with a pair of albino rasta ghosts, a dude in fantastic shades named Morpheus takes Neo to a mansion to get better. The cure is either a blue pill or red pill. It's Neo's choice.

Neo takes one of the pills and wakes up in the real world. It's super bad. How bad? Everyone that's awake has to wear slightly worn grey wool sweaters and fly around in amazing subterranean spaceships. It's so bad that one dude morphs into Harold Perrineau and no one seems to notice at all.

Here we learn the core conflict. When people are awake they're in the harsh real world. If they get a phone call, however, they fall asleep and get zapped into the Matrix, a robot experiment that's never explained.

Neo does some virtual reality training so he can fight robot agents in the Matrix. He trains so well that he makes all the meters on a screen fill up very quickly. Soon a crowd gathers around the monitor to cheer him on, intently watching the meters fill up. 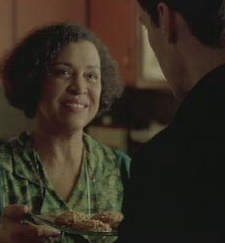 The first display of Neo's incredible power is a remarkable shot I'll never forget. His black trench coat billowing in slow motion, Neo performs a perfect somersault as the camera swoops around him. Midway through the roll he lowers his shades and winks at the camera.

Neo's girlfriend always wears a motorcycle helmet. I think she said her name was Karen?

Morpheus and Neo visit the Cleric, a middle-aged woman who offers them cookies. Neo eats a cookie. Then the Cleric asks if there ever was a cookie. Neo looks at the plate and there are no cookies whatsoever. What the???

The middle of the movie is basically four of these visits, each one presenting a different baked good to confound Neo.

Morpheus gets captured by Agents. Mr. Smith is the best agent, so Neo (fulfilling his destiny as a Christ figure) has to fight a hundred of him and then fight a really big Mr. Smith in the rain.

And that's why The Matrix made me the person I am today.