Lines From BioWare's Next Trailer

I like BioWare's games. Their Good/Bad/Neutral dialogue tree might be the most misguided game mechanic to come along since Doom 3's flashlight and creative sidequests take too much of a backseat to their standard "saving the world/galaxy/universe" counterparts, but the designers hit more often than they miss. 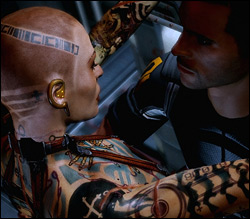 After the latest round of trailers for Dragon Age and Mass Effect 2, however, I'm a little worried. It's not the misappropriation of Marilyn Manson music, or the awkward sex, or the silly EXTREME tone that the marketing assholes cribbed from the first run of Rob Liefeld's Youngblood. The problem is horrendous dialogue that actually seems to be taken from the games, such as:

"Now who's the badass biotic, bitch?"

(describing tattoos) "Some are to remember. Some are for kills. You know, good ones. And some are for because, hey, fuck you."

Hopefully these painful moments won't seem so bad in context, but at this point I won't be surprised to hear the following lines in an upcoming trailer for Dragon Age or Mass Effect 2.

"You just fucked with the wrong hombre. I've got piercings!"

"God? Ha. God is dead. Let me see what items you have for sale."

"BLOOOOOOOD!" (screamed by someone drowning in blood)

"Stop talking. I don't care what you think. Yeah, I know I asked you a question, but I was being ironic. Sheesh."

"Yeah, I do drugs. What of it? It helps me forget the sheeple like you."

"No one understands my pain, but if I work you over long enough with this laser you might come close."

"I enjoy the games of American McGee."

"Get a good look at this ass, boys. It's the last one you'll see before your own - IN HELL!"

"I've got an axe blade with your name on it - and I don't like your name."

"Sometimes the world just seems so dark I can barely enjoy having sex with you just before we confront the main villain."

"I'll complete your quest, but not without payment. Got any energy drinks?"

"What's a vivisection or two between friends?"

"ATTITUUUUUDE!" (screamed by someone drowning in attitude)

Order Of War
The checkers to Company Of Heroes' four dimensional holochess. 6/10

Heroes Over Europe
Get my hopes up for a "spot Iron Man over Luxembourg" simulator, then dash them. 4/10

Spyborgs
In hindsight, perhaps I shouldn't have been so open with my secret folders in front of the dudes that called themselves Spyborgs. 5/10

Kingdom Hearts 358/2 Days
At long last, I can look at the nickname I chose when I started writing for this site and not feel like it's the stupidest name for anything ever. 8/10