Randy Pitchford has boasted that his first-person rpg Borderlands (think Diablo meets Quake, then try to forget Hellgate: London) will feature somewhere around one billion guns, give or take a few infinity plus ones. This works out to roughly 1,500 guns per bullet that the average player will come across, making the "throw gun" button an invaluable addition to the game. 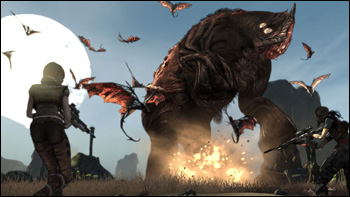 How can there possibly be that many guns in a single game? Borderlands features a generator that dynamically spits out weapons based on a variety of random properties. Many of these are variables you'd expect, such as damage, ammo capacity, range, and rate of fire.

Additionally, there are rare modifiers that will imbue weapons with additional attributes, many of which have never been seen in video games before. These attachments will number in the thousands, but only the following have been officially announced:

Memento Mori
When your lead characters are named Lara and Max, your game really shouldn't be this boring. 3/10

BlazBlue: Calamity Trigger
A decent anime-styled fighter based on the Proust book of the same name. 7/10