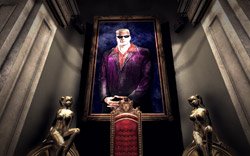 The wait is over, Duke is back! The reviews for Duke Nukem Forever are in and they are not favorable. In addition to the dated feel of the game, most reviewers cite DNF's rampant misogyny, recycled dialogue, and toilet humor as indications of low quality. Defenders of the game point out that Duke is a joke and you shouldn't take it at all seriously. They're both wrong.

Duke Nukem Forever is full of shocking misogyny, puerile toilet humor, and it is terrible, but DNF isn't a joke at all. This is a serious, methodical, absolute refutation of male-empowerment and the patriarchal ideals of manhood. It depicts a reality in which the entire world bows to a single hyper-masculine character's ego and sexual needs, and this world is as dystopian as its egocrat is a monster. It screams, with every flung turd, slapped woman, and chugged beer: "Death to the patriarchy!" 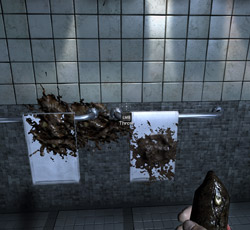 The game begins with Duke facing off against a toilet, phallus in hand. Press the button to urinate. This is such a clear Jungian allusion to the violence throughout the game - the player will spend the entire game staring at Duke's deadly phallus aimed at women and aliens - that it is amazing this opening moment has been so misread by reviewers as purely toilet humor.

Duke marks his territory for as long as the person playing the game chooses to engage in the act. From there players are free to explore a sporting stadium's training area; the hearth stone of modern masculinity. As Duke, you can rush through this portion or wallow in Duke's oppressive ego, marveling at himself at every turn, even if he is incapable of jumping the six inches to stand in a Jacuzzi tub. You can even force Duke to pull a wet piece of excrement from a toilet, holding it and flinging it as you see fit. Duke is tortured by your actions, audibly objecting and wondering why. Why are you, his super-ego, abusing him?

If Duke Nukem Forever were a third-person game the player would feel as if they were witnessing the actions of another. In this context I could see the common reviewer's arguments against the game having credence. Like Haneke's Funny Games the audience, or in this case, the player, would be participating by watching, participating as a voyeur in Duke's disgusting acts of misogyny. 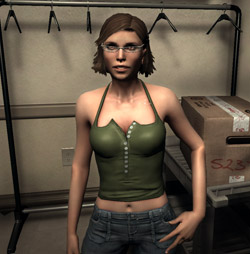 Instead, by thrusting the player into the first person perspective, the highly linear game forces the player to become Duke and grants them the illusion of agency. They are forced to realize the hyperbolic fullness of the masculine ideal. To ensure you never forget this, Duke is addressed and speaks constantly, bragging and preening as he dishes out violence and insults in equal measure. Your health is synonymous with your ego and undertaking traditionally masculine acts - sports, lifting weights, torturing animals - increases your ego.

For the testosterone addicts, this is the gaming equivalent of forcing a kid caught smoking to power through an entire carton of cigarettes. "Look at how bad your choices are," the game brags, rubbing your nose in disintegrating women and jiggling breasts. As Duke you're not "saving the babes" or "getting back the chicks," you wear the boot of the patriarchy stepping on the throat of all women and your only choice is how hard to press the boot.

Even the setting, Las Vegas, is a hollow palace of the patriarchy, a latter-day Mecca for the male id and ego. It imitates the real world, but Duke has infected it, towering in golden statues and dioramas like the power-mad dictator of a forgotten Soviet satellite. When women are seen they throw themselves at Duke and make sexual comments. Such is his power that even when shrunk to the size of a toy a woman wants to violate herself with his entire body. 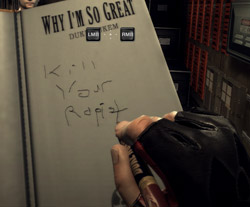 The plot is rudimentary. It serves the larger metaphor. Aliens are kidnapping all of the women, freeing them from Duke's domination. He wants them back, and this journey takes him through the ruins of Las Vegas to an alien hive. Here, the game reaches its psychosexual climax.

The alien hive exists as a gynecological atrocity, a womb-as-city. Sphincters and labial shapes appear at every turn and heaving breasts literally decorate the wall. Duke can slap these and laugh as women moan in the background. During this section Duke has achieved apotheosis, becoming himself a phallus, penetrating the alien reproductive enclave, deflowering doors and chuckling through galleries of female viscera. When the women are encountered, restrained and submissive, presumably raped by aliens, they cannot be saved, Duke can only leave them, slap them, or kill them to terminate their alien pregnancy in a final act of sexual violence.

Duke's trivial apologies as you execute these helpless women are the sign that, at last, you have acted beyond the boundaries of even this monster. Even Duke Nukem is appalled by killing women, but it's all he can do to save them. "It's better this way," he says, unconvincingly. At the end of the hive section Duke, the king, must destroy the immense alien queen to subjugate women once more.

If you feel sickened by this point in the game, congratulations, you're not a complete psychopath. If you blame this sickness on Duke or Gearbox or 3D Realms then you've still missed the larger point. It is your fault. You guided Duke through level after level, you cooperated, you collaborated, you pulled the trigger. You chose to reach this point.

And, the game declares, no matter who you are, even if you are a woman, slave to the patriarchy, if you are playing the game then you are part of the problem.

So don't play this game.