Recently, it was revealed that Jeb Bush--one of the lesser but presumably more competent Bushes--had a rather unique interpretation of Nathaniel Hawthorne's The Scarlet Letter: a novel typically taught to high school students because of its explicit symbolism. We enjoyed Mr. Bush's laser-focused literary analysis so much that we asked him to synopsize some of the English language's other great novels, and he cheerfully agreed. And just in case he asks, we definitely donated $50,000 to a VA hospital in his name. 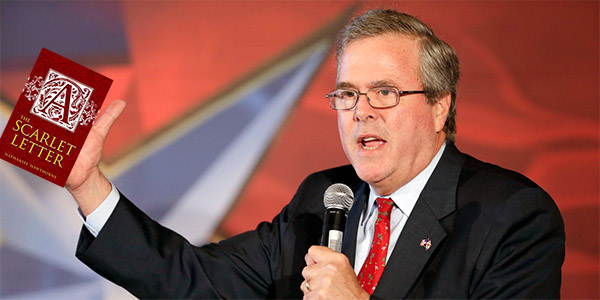 A troublesome horse tries to gum the gears of Capitalism, and is rightfully turned into glue for interfering with the free market. The entrepreneurial spirit of those delightful pigs makes this a recommended read for the future business leaders of America.

To Kill A Mockingbird

A liberal lawyer unsuccessfully plays the race card, only to have his client escape like the criminal he is and shot before he can pose a further threat to the community. Outside of the important message that the disabled should be shuttered in creepy houses, Harper Lee's single novel is barely relevant in this time of racial harmony.

An ignorant man opposes a well-organized and Conservative government of the future, one that we in the Republican Party are working towards every day. Really shows the effectiveness of enhanced interrogation, and I've already spoken to top brass at the Pentagon about this whole "rat cage strapped to the face" idea.

The Grapes of Wrath

The Joad family admirably struggles to make it during the Dust Bowl, but ends up falling victim to the misleading ways of organized labor unions. Normally, I'd recommend a novel with such a message, but the scene with the woman breastfeeding the man at the end is downright pornographic. Rest assured, I've already had several Florida libraries remove this smut from their shelves.

An accomplished writer ends up falling victim to the temptations of a young harlot. In the end, a great moral for our Republican brothers to keep these career-destroying proclivities within the bounds of their East Asian sex vacations, as God intended.

The Sunday funnies take a disgustingly ribald turn thanks to the efforts of "writer" Alan Moore. I read 300 pages of this trash without seeing a single punchline about golf or gigantic sandwiches. Give me a Blondie treasury any old day!

Demonic spirits of the occult convince an honest business owner to give his shirking employee a paid holiday. While the presence of Tiny Tim shows the repercussions of the poor's irresponsible lifestyles, I cannot possibly condone such a Satanic novel. Don't quit your day job, Chuck!

The Lord of the Rings Trilogy

Brave European warriors fight through three books to push back the evil dark races. I'm not sure why, but J.R.R. Tolkien really speaks to me, and gives me feelings I will have to consult my pastor about later. Warning: contains a few dozen pages of fruity poetry, so you might want to have some boys down at the Junior College black those parts out before you read.

Be warned, fans of classic monster movies: Ralph Ellison's bait-and-switch has nothing to do with the legendary scarifying figure of the same name. So what's it about? Unfortunately, I gave up around 40 pages in when the author made it perfectly clear no one was going to drink a potion. Something about the Blacks, I think? Your guess is as good as mine.

I cannot make hide nor hair of this absolute horseshit.