Electronic Arts - "I don't feel comfortable using microtransactions to make our customers pay for this. It should have been included with the game in the first place, and I have enough respect for our customers to assume they'd know that."

EA Sports - "In this year's edition we should have everyone focus on collision detection, physics, A.I., and gameplay. Pass the word on to everyone who's working on the lemonade sales economy, Create-A-Player's Dna Sequence And Sexual Orientation, and the Security Guard Terrorist Attack Response Training minigame."

Kotaku - "We've been getting a lot of emails from people who aren't throwing up when they gaze upon the site's design. High five, guys. High five."

Team Ninja - "What I would do, and this is just me, is make the breasts smaller."

GameSpot - "I'm giving the game a 9 because it was fun as hell. Innovation is great and all, but we play it up way too much."

Sony - "It sure feels good to be on top of the console industry."

Spong - "The story's almost ready to publish, I just need to fact check it first."

Gamestop - "Pre-order? Don't worry about pre-ordering. We're a game store. We have tons of games for everyone who wants one. A hassle-free shopping experience is the best way to ensure repeat business."

Microsoft - "Damn that maverick Major Nelson! His reckless rebellion is going to bring this whole company down!"

VGA Predicts: Game Of The Year

I'm not one to make predictions. Games get overhyped in previews all the time and passing judgment on a title before it's complete is a waste of everyone's time, so I prefer to keep my opinions to myself. That having been said, a newly announced game has changed everything.

This timely game is based on the overlooked 2004 movie of the same name featuring John Heder, who went on to exhibit an incredible range in his acting abilities. The basic gameplay revolves around being quirky and looking funny. That was more than enough to carry a two hour movie, so it will certainly carry an eight hour video game. Not convinced? Just check this out! 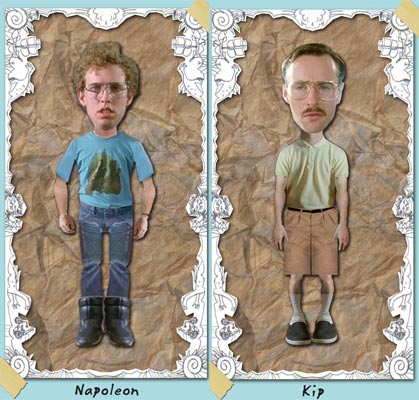 Did I just take a wrong turn and end up in the wacky factory? On the corner of Kooky Street and Hilarious Lane? I think I did! Keep an eye out for this instant classic, and remember where you heard about it first.

Hour Of Victory
The first console game with empathy, allowing the game to realize how shitty it is and employ show-stopping bugs to keep you from playing it. 0/10

Ratatouille
The Pixaric Equation states that when X = Lame Kid's Movie and Y = Awesome Pixar Movie, Game based on X is always greater than game based on Y, though neither are as good as Z, which stands for every other game. 4/10

Harry Potter And The Order Of The Phoenix
SPOILER ALERT: Fun dies. 5/10

Pokemon Battle Revolution
One hour of "Oh my God it's Pokemon online!" followed by three hours of playing Pokemon Diamond on your DS to have some actual fun. 4/10

Chicken Shoot
Next on the Wii: every shitty flash game you've been avoiding for $30 a pop. 1/10

Hospital Tycoon
This game's only saving grace is that you don't have to deal with Michael Moore or diagnose head trauma in the people who take his movies as entirely factual. 3/10

Dead Reefs
A promising game with loads of poorly made puzzles, none of which are as infuriating as "don't they realize computers come with mice now?". 4/10

AFL Premiership 2007
A criminally unfun representation of Australian Rules Football, which is sort of a smart marketing move given the target audience. 4/10

The Adventures Of Darwin
Between this game and those retarded "Darwin Awards" floating around the backed-up toilet stalls of the internet, it's very likely that Darwin's corpse has spun out of his casket and drilled its way somewhere under Utah. 2/10

Dungeon Maker: Hunting Ground
Lure dim-witted monsters into your trap and take their money in this interpretation of Sony's strategy with the PSP. 7/10

Brothers In Arms DS
The good news is that we have WW2 shooters scrambling to handhelds in a desperate bid to survive somewhere, but the bad news is that they still exist and incinerating each and every one in a furnace will be rather time-consuming. 5/10