Those sly dogs at 3D Realms have been working the internet into a disinterested frenzy for the past few weeks with teaser images of Duke Nukem Forever. It all began with this picture that was posted along with a job opening at Gamasutra:

I didn't forget to link that thumbnail to the real image. That's the whole thing. According to George Broussard:

That's an in game, real-time shot of Duke standing in a random hallway. It was really done as a small teaser for a job ad on Gamasutra.com. Nothing more.

I'm glad some of you enjoyed it, and we'll show more later as we start to wake from our slumber and decide how best to show the game off.

This spurred numerous questions about Duke Nukem Forever. Will the game run in 200X125 resolution? If that's in-game, how can players possibly see where they're going when the camera is always five feet in front of Duke facing backwards? Was the advertised job opening available due to retirement?

Even more questions arose when a new teaser image popped up: 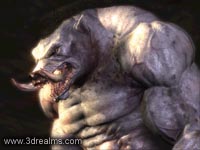 How many graphic designers did it take to slap a pig's head on the body of a Locust grunt from Gears Of War? Will every level be a featureless black box with one enemy so the game can run at a reasonable framerate while displaying all the perfectly shaded bump-mapped pig veins that gamers demand?

While none of these questions have been answered, I have a feeling that the hype train will continue to slowly roll backwards down a hill once the internet gets ahold of these exclusive Duke Nukem Forever images that we have obtained. Remember, these are in game, real-time shots:

Whoa, the action in this game looks almost as intense as the lighting effects!

Here we see Las Vegas, rendered more beautifully than ever before.

One of the new anthropomorphic enemies you'll face. If you thought pig cops were bad, wait until you see pug politicians.

Our hero rescuing a damsel in distress from the clutches of an undead baddie. Note the realistic blood effects.

It wouldn't be a Duke Nukem game without a stripper! This particular model was obviously based on Scarlett Johansson. Better hope she doesn't sue, boys.

A stunning display of the game's advanced physics. I had no idea elephants could bounce that high!

Haha, good old toilet humor. Note that you can actually plunge toilets now, so you're no longer limited to just peeing then flushing. This truly is next-gen stuff.

WarTech: Senko no Ronde
Why pay $10 for an Xbox Live Arcade shooter that you have to download (blech!) when you can conveniently buy a much less fun game at your local store for $60? 3/10

Shrek The Third
What it lacks in fun and originality, it makes up for in heaping helpings of bloom. 3/10

Mario Party 8
If they don't start trying harder, this series might start to get old by Mario Party 12. 6/10

Legend Of The Dragon
Instead of making the fighting in this fighting game fun or getting the visuals to match up with the cartoon it's based on, the designers seemed to focus on drinking heavily and trying to get fired. 1/10

Pirates Of The Caribbean: At World's End
Finally we have a movie tie-in that isn't afraid to bring something new to the table by making the player walk around linear levels that follow the movie's storyline in wholly predictable and uninteresting ways, push a single button to fight hordes of bland enemies, and completely forget the game as soon as the final credits have rolled. 4/10

Infernal
Less of a shooter, more of a "crouch over a dead guy for ten seconds then walk to the next one and repeat the process" sim. 4/10

Loco Mania
First Puzzle Quest combined puzzles with rpgs and now we have this train sim/puzzle game, now it's only a matter of time before someone accidentally makes a sandbox WWII shooter puzzle game and dooms us all. 7/10

Dawn Of Mana
Fight tons of interesting enemies you can't easily target, curse your way through forced platform sequences with controls that are anything but precise, and use PHYSICS to accidentally throw objects at yourself. 4/10

Brooktown High: Senior Year
It's high school, only more annoying and you're paying to sit through it. 4/10

Innocent Life: A Futuristic Harvest Moon
In the future machines will do all a farmer's work for him, and by extension play this game for us. 4/10

Etrian Odyssey
This confirms my long-held beliefs that 1) a game about making maps would be awesome and 2) cartographers can't fight for shit. 7/10