You'd think that people who willingly classify themselves as gamers would rank "playing video games" at the top of their list of fun activities, but it falls somewhere behind gettin' mad about video games on internet forums, building impossible-to-meet expectations, and bitching about video game stores.

The type of person who complains about their shopping experience is a special breed of nerd. One must be antisocial, but not enough to stay home and buy games online. Offenses - both real and imaginary - must be perceived with crystal clarity and stored in memory for future reference and embellishment, but not responded to in any meaningful way when they actually happen. Dragon shirts must be tucked into grey stonewash jeans.

For eight years I have observed some of the most popular gaming forums, carefully preserving every video game retailer horror story that I came across for future generations. These are some of the most fascinating entries in my collection. 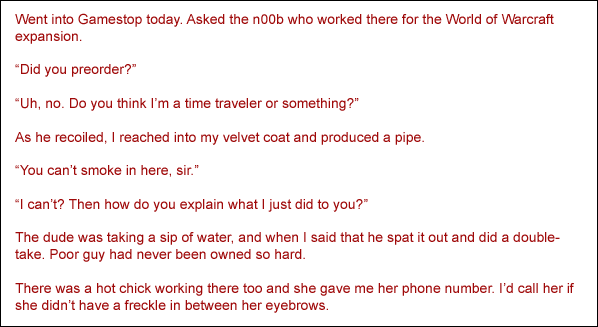 Neverwinter Nights 2: Storm Of Zehir
Pay $30, have your claim that there was no way they could make a better expansion than Mask Of The Betrayer verified. 6/10

Sonic Unleashed
Sega is Lucy, the promise of a pure old-school Sonic experience is the football, and we are Charlie Brown with involuntary leg spasms. 5/10

The Last Remnant
Call off work, break out your favorite Squaresoft wallscrolls, get some refreshments and settle in for forty of the longest and most confusing hours of your life. 6/10

Guilty Gear 2: Overture
I'm not even sure what this was supposed to be, but I feel like I just walked in on a scarecrow having violent sex with a bonfire. 2/10

Mortal Kombat Vs. DC Universe
If you like to argue about who would win in a fight between The Flash and Raiden, now you can argue about it while playing a so-so fighter and waiting for Street Fighter IV. 7/10

Tomb Raider Underworld
Sorry, Eidos' PR firm and has requested that I refrain from making any jokes that don't rate at least an 8.0 on MetaChuckle.com 6/10

Need For Speed Undercover
If they took a few more years to polish every entry, the series might actually be worthy of a yearly release. 6/10

Skate It
A skateboarding game where you stand on a skateboard-shaped peripheral with a motion-sensing controller and reenact skateboarding by - you guessed it - gyrating awkwardly and pushing buttons! 6/10

Goosebumps Horrorland
The scariest aspect of this game is its contribution to the slowly unfolding realization that for all of its potential, the Wii is heading exactly where you were afraid it would go. 2/10