PlayStation®Home is a 3D social gaming community that allows PLAYSTATION® 3 users to meet, chat, plan, and launch into games together. You can create your own custom avatar, decorate your personal apartment, play mini-games, shop, watch videos, attend special events, and much more - it's all part of PlayStation®Home.

Social avatar mini-game product placement special event shopping? Hell yes. This is what we live for.

We stopped playing board games long ago because aside from the company's logo on the box, there just isn't enough advertising to keep us interested. Worse yet, once you buy Scrabble, your wallet goes back in your pocket. There's no chance to buy Letter Packs or a Red Bull brand beanie to impress the people you're playing with, or even a Lignet Roset sofa to sit on. What's up with that?

Home promises to deliver all the advertising and microtransactions that board games lack, while eliminating all the fun and the sense that you're communicating with other people. Avatars are sort of creepy in a sleepwalking hipster sort of way, and since typing with the controller is a painstaking and painful process, most people communicate by standing directly in front of one another and using one of a few canned dance moves.

Maybe that's a bit unfair. Home delivers so much more than marketing in the guise of social interaction - it also provides yet another layer of abstraction between you and the games you bought a video game system to play. 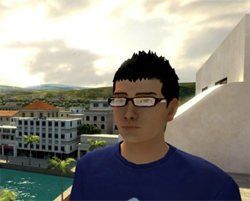 As gaming grows, console makers try to appeal to wider audiences with the swiss army knife approach. Gone are the days of putting a game in a system, turning it on, and instantly being greeted with a prompt to "Press Start" and play. Now every system bombards you with dashboards, channels and media bars filled with featured downloads, weather updates, advertisements (sensing a pattern?) and system update notifications.

Our video game machines can do more than ever, but it seems that none of the added capabilities do much to improve our experience of, you know, playing video games. One could even argue that premium downloadable content has soured things more than it has provided actual, valuable content that shouldn't have been on the disc in the first place.

If you plan to use Home to "meet, chat, plan, and launch into games together" then you will have one more step to go through after being presented with the XMB and installing any software updates before you can get into your game of choice. I'm not really sure why you couldn't just do this from a friends list within a game.

If you don't plan to use Home as an unnecessary and somewhat awkward platform for launching into games with friends, you will basically have Second Life with no user creativity or deviant sex, but more fauxhawk than you could ever possibly need.

World Of Warcraft: Wrath Of The Lich King
The only way this could have sold more copies is if - in addition to the Death Knight - the expansion offered Blood Slayers, Killer Awesomedarks, and Megagod Skullsmashers as playable classes. 8/10

Prince Of Persia
A long-running series switching to cell shading, visibly corrupt worlds that become cleansed through your actions, and female companions aren't anywhere new, but if the Warrior Within was original I'll stick with derivative every time. 8/10

Destroy All Humans! Path Of The Furon
Further proof that there is no god, or if there is one he hates us: this series' continued existence combined with the lack of a follow-up to Grim Fandango. 4/10

Bolt
Sometimes I feel bad about recycling jokes for these tie-ins to computer animated children's movies, but then I remember that they just retread the same tired crap too, so I suppose I'm creating some sort of brilliant satire through laziness. 6/10

Shin Megami Tensei: Persona 4
While this is one of the best RPGs of the year and by far the best PS2 game to come along since Persona 3, it's still not quite enough to make me whip up a PS2 icon for this review. 9/10

Castlevania: Judgment
Castlevania and the 1-on-1 fighting genre is the worst combination of the year, and I don't have to remind you that this is the very same year I combined fish sticks with melted chocolate. 2/10