When I begin a new RPG I like to take my sweet time absorbing the details. Every stat description is carefully read. "Ah, yes," I declare as I thoughtfully rub my chin, "it seems that having more Dexterity will allow me to swing an axe faster."

Lore is savored. Please, tell me more about these blood dragon priests of which you speak. Do you have some more names, locations, and political factions in store for me? I'll take them all at once, thank you. 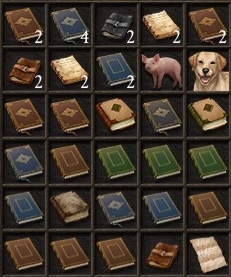 "This? Oh, it's just my inventory. You know, books. A book pig. More books. This is only page 1 of 4."After a few hours the magic inevitably starts to fade. I begin to realize that I'm probably putting more effort into the story than the writers. That was definitely the case with Mass Effect, when I realized that every compelling plot setup was lifted whole cloth from Revelation Space.

Even when a game is mostly original and good, my painstaking approach still gives way to Finish This Game mode long before the halfway point.

That didn't happen with Pillars of Eternity. Exploring, finding out about the world, and tinkering with the combat mechanics never got old. It always felt like there was enough substance to justify my ridiculous playstyle of slowly absorbing the entire game like a gross nerd blob. My patented Finish This Game mode never kicked in. I spent - and I'm well aware that this is shameful - seventy hours with the game. None of it (well, maybe a little) felt like filler.

With all that time in Pillars of Eternity under my belt, I can definitively say two things.

1. Pillars of Eternity is the best RPG since Fallout: New Vegas. It combines that game's intricate world building with the best elements of classic isometric CRPGs like Baldur's Gate and Planescape: Torment and the original Fallout, then drags the whole genre forward with a ruleset and user interface that manages to make sense most of the time.

2. This video game is primarily about stealing books.

So I stole all those books. Sometimes people just left their books out in the open. Sometimes I had to sneak past a guy. Once or twice I might have unlocked a guarded chest then killed several people who caught me in the act. In the end, I'm proud to say that I got all the books.

I felt particularly pleased with myself at the halfway point of one particular dungeon. After crawling through several trap-ridden floors I had managed to collect a dozen glorious books. A great haul, to be sure, an adventure worthy of any campfire tale. Then I happened upon a library. In the dungeon. There were so many books in there, you guys.

Thankfully I always walk around in scouting mode, which puts your entire party in stealth and makes it possible to spot hidden stuff. In this case I found something tucked away behind one of the library's bookcases: A secret stash. Of books.

Later I obtained my own keep. By investing money to rebuild individual buildings and defensive structures within the ruins, I was able to restore this shithole to its former glory. For example, I restored a library. with books in it. That I was able to pick up and put in my inventory.

This game is the greatest god damn thing.

Pillars of Eternity
You should probably play this, even if you're not a virtual book thief. 10/10

MLB 15 The Show
A portrayal of baseball so lifelike that if I saw it on television, I'd change the channel. 7/10