A severe flaw in all non-slim models of the Playstation 3 presented itself for a few days this week, resetting dates, denying access to the Playstation Network, and making games on the platform such as Heavy Rain more unplayable than usual.

While this was obviously a tremendous blunder, it had the inadvertent benefit of pointing out that this whole "mandatory networked user experience with worthless trophies/gamerpoints" thing might not be such a good idea for end users that like to buy things and use them whenever they like, especially when combined with Ubisoft's you-must-constantly-be-online-or-your-game-will-shut-down DRM for PC games and the news that the original Xbox will no longer work with Live.

If a global PS3 outage wasn't the worst thing that Sony has done to the platform, what would qualify? I have a few nominees.

Name Of The Game

Before the Playstation 3 was announced, an internal debate raged on for months at Sony regarding the console's name. Several key figures were intent on abandoning the brand recognition that the company had accumulated over the course of the previous decade in favor of something fresh, with a cross-demographic appeal.

Needless to say, this was a tremendous hit. Unfortunately, after committing to a logo and branding the first batch of GameSony Bestdevices, it was revealed that the product name had already been trademarked by Nintendo, for their HD follow-up to the Wii.

Due to a vague drawing accompanying the "Plug your console's power cord into a socket" step in early versions of the PS3 manual, many customers were under the impression that they had to place their cats in tiny rocking chairs and read Madonna's Sex to them.

Naturally, this lead to several class-action lawsuits; one on behalf of every customer that went out and bought cats specifically for this step, and another on behalf of those who missed time at work because their cats enjoyed story time so much.

While revealing the multiplatform release of Grand Theft Auto IV, Microsoft's Peter Moore rolled up his sleeve to reveal a fake GTA tattoo. Not one to be outdone, Sony Computer Entertainment's then-president Ken Kutaragi called a press conference the following week, where he unveiled his very real Genji: Days Of The Blade tramp stamp.

Greater Than Some Of Its Parts

The first few generations of the Playstation 3 were rather expensive and bulky. While these factors may not have accounted for a majority of lost sales, they certainly didn't help. Most people may not realize this, but the increased cost and size were a direct result of two unique hardware components:

- The fluctuationometer, which measured fluctuations of varying sources and

Not only were these devices completely useless, but their design lacked the wiring which would have supplied them with power.

CG Or Not CG

Remember the incredibly fake Killzone 2 trailer from E3 2005, featuring pre-rendered footage which was intentionally passed off as in-game action? When the obvious questions began to pop up, SCEA's Jack Tretton replied that it was "real gameplay everybody's seeing out there".

In time, the official word from Sony changed slightly. First, they admitted that it was video, but maintained that the video was "to PS3 spec". Then came the admission that it was a target render.

Finally, on the eve of the game's planned release date, Sony admitted that Killzone 2 itself was entirely made up as a publicity stunt, and that the whole thing had gone too far. "If we had made the sequel", said one anonymous source, "someone would have realized that we totally stole the Helghast design from those dudes in Jin-Roh." 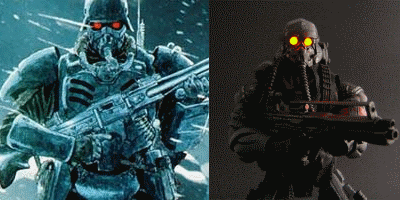 Napoleon: Total War
Every bit as fun as it is difficult for me to refrain from making a tired joke about Napoleon's height. 8/10

Sonic & Sega All Stars Racing
Does not include multiplayer because "on PC people will steal it rather than buy it" (as opposed to the Xbox 360, Wii and DS versions), which is totally fair to the people who buy this for PC and will result in a larger and more receptive audience for the next release on the platform. 1/10

Supreme Commander 2
For a game that pays so much attention to scale, it's odd that the marketing has been limited to a single hand-printed napkin rolled up into a miniature bottle and flung in the ocean. 7/10

Battlefield: Bad Company 2
"This call to modern warfare is... duty of... wait, we made a pretty awesome game so why are we pandering again?" 8/10