If DLC hasn't done enough to convey the feeling that you're only getting part of the full experience when you buy a game, retailer-exclusive bonuses are going all out to drive the point home. For every new release there are dozens of in-game items which range from underwhelming to overpowered and exclusive chunks of content that seem intent on splitting the player base.

For instance, take Star Trek Online. In addition to making an entire playable race only available to customers that buy lifetime subscriptions for $240, the MMO will have a retailer-exclusive for just about every store that will carry the game.

Gamestop
Become the master of the social game with exclusive access to in-game chat and advanced options for disabled gamers!

Best Buy
Show the universe you're one bad hombre with a full suit of titanium armor... painted like a shark with glowing eyes! 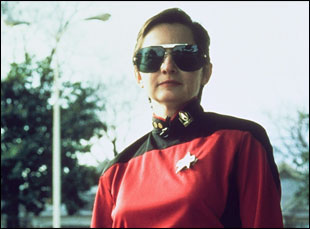 Buy now and get the "Star Trek 3000" spaceship, which is identical to the Enterprise in every way but three times as large.

Amazon
Who needs in-game exclusives when your special Limited Edition box comes with an authentic bone fragment from the corpse of DeForest Kelley glued to a commemorative mount?

Toys R' Us
Buy from us and get exclusive access to the only servers based in North America and Europe! Wow!

GoGamer
Want to be able to move your ship vertically while in space mode? Get the game here.

Gamersgate
Exclusive user interface options, including a way to close the fullscreen "Welcome to Star Trek Online" message box that pops up every time you log in!

Supercuts
Every humanoid model is Data, every ship is a very large Picard with his arms outstretched like wings!

Divinity II: Ego Draconis
Much like Risen, this is a game that will test your ability to defend a horribly written RPG with clunky mechanics just because it's foreign. 5/10

Army Of Two: The 40th Day
Army Of Two stood out thanks to the exuberant pair of mass-murdering best buds set against a jarring backdrop that played off of real world events, so now that both of those things have been toned down we're left with a slightly better Rogue Warrior. 5/10

Vancouver 2010
This is not the first installment of a yearly Sim City-style Canadian strategy franchise that I had been hoping for, and therefore it is a disaster. 4/10

Might & Magic: Clash Of Heroes
Yes, it's got 100% more anime than any other installment in the series, but it's also got 1000% more fun than any Might & Magic game released in the past ten years. 8/10