This week we learned that the long-rumored Civilization V is officially in development, and on track to come out later this year. How will Firaxis attempt to improve upon one of the greatest PC games of all time? I sent them an e-mail to find out, and then I remembered that no developers or publishers actually care about this article so I made a bunch of stuff up. 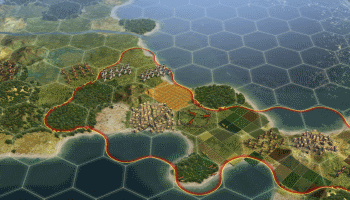 Due to limited processing power, the first four Civilization games were only able to render the game world on simple four-sided square tiles.

Now it's 2010, and thanks to recent innovations in Nvidia 3D Vision and the incredibly useful Games For Windows Live, we can now use hexagons - in this case, six-sided ones. This will make a huge difference when it comes to accurately portraying gigantic bee nests.

New Roaming Enemies
As your settlers scoured the map for a suitable home in previous Civilization games, they did their best to avoid roaming predators like lions, panthers, bears and wolves. This time around you can expect a much more diverse array of wildlife. Replacing the above animals will be over thirty seven breeds of spider.

New Forms Of Government
While all of the old standbys will be making a return, players will have some new options when deciding which form of government to put into place.

For example, there is the Tea Party System, which is like democracy but when a citizen doesn't get their way they get to pretend that they aren't being represented.

Then there is the Frankocracy, where people named Frank sort things out for everyone else.

More Realistic Cities
The cities in Civilization IV were fairly nice, but they didn't have nearly enough detail. Thankfully, all of Civilization V's cities will be photorealistic renditions of two real-world locations: Pittsburgh and Detroit.

Reworked Tech Tree
Previous tech trees were filled with dozens of innovations to research and acquire on the long, arduous path to true prosperity. It was all a bit much, really.

In the new tech tree, there will be three items to research:

Combat
Let's face it, creating a stack of units with a number that is larger than the number on your enemy's stack and bumping into him isn't very engaging or strategic. Combat has always been merely tolerable, it got the job done without detracting from the bigger picture of the game.

This time around, things will be quite different.

Units no longer stack, so impassable terrain can be used as an effective means of funneling invading armies. This means that a force of twenty Sherman tanks can run into a bottleneck and find themselves held off by a single spearman while roaming spiders pick off unfortunate stray tanks at the back of the column.

Combat itself is determined entirely by the rolling of dice, which (thanks again to Nvidia 3D Vision and Games For Window Live) are now six-sided.

BioShock 2
Unnecessary but still not as bad as you might have been led to believe, it's the Edge Of Reason to BioShock's Bridget Jones' Diary. 7/10

Aliens vs. Predator
Nails the atmosphere and general vibe of the involved franchises, then runs out of nails. 5/10

Heavy Rain
Incredible presentation, and I would have loved it if the "get ready to press a totally random button" bits had been replaced with more of the excellent thumbstick movements or, well, anything that remotely made sense. 7/10

Super Monkey Ball: Step & Roll
Would have been less painful if it was tited "Stop Drop & Roll" and players were forced to light themselves on fire. 3/10