Make These Skyrim Mods For Me

After dabbling in the Xbox 360 version of Skyrim at launch, I recently started playing in earnest on the PC. The experience becomes absolutely bonkers when you have access to your favorite fiddly settings with weird names such as "ambient occlusion" and "60 frames per second". What really turns Skyrim into a totally different game, though, is having access to mods. Well, yes, duh. 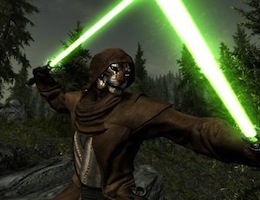 Of course, there are all sorts creepy mods featuring naked girls and ten thousand intricately sculpted hairstyles pulled from the heads of Korean pop stars. Look past those, however, and you'll see that there are also some really great mods that add fun content or smooth over the little quality of life issues that can mar an experience when they accumulate over dozens of hours.

Unfortunately, most of the mods that I have been looking for simply do not exist. If someone out there could hold off on porting naked Witcher 2 models to Skyrim long enough to crank some of these bad boys out I'd appreciate it.

Combine the tram ride from Half-Life with Epcot Center's Noreweigan-themed attraction Maelstrom. Add in a pinch of Toobin'. By a pinch, I mean add all of Toobin'. The tubes (toobs?), the rednecks with shotguns, the floating six packs, and that music.

I like skeletons. A lot. The problem is that their proportions are all screwed up in Skyrim. Are we really supposed to believe that skeletons are that big? Get with it, Bethesda. While we continue for an official update to address this terrible design oversight (which is frankly game-breaking) someone out there should make a mod to reduce the size of skeletons by the necessary 3%.

Skyrim's world strikes me as a very lonely place. Sure, it's populated by thousands of characters and critters, but I have a hard time connecting with them. Our interests are entirely different. They're all outdoorsy, active, sociable types with excellent posture. Also, they're mostly fantasy vikings. If everyone in the game was named Dennis, we would at least have one thing in common.

If you spend more than, say, half an hour staring at a butterfly you will notice that its behavior begins to repeat. All I want is a completely dynamic, adaptive artificial intelligence for these butterflies. That's all. I just want them to learn, to handle each situation differently based on their emotions, which should also be programmed in there. When butterflies in Skyrim can pass the Turing Test, I will be happy. I guess this might be more involved than a normal mod so you should probably have experience with html.

Have this game's creators even heard of spellcasting discipline? Because it sure doesn't seem like it. And don't get me started on the completely absurd and improbable nature of the dragon shouts.

I'd like someone to tone these elements down from their present cartoonish state. What do I mean, specifically? You know those "REALISTIC LIGHTING" mods that make night pitch black and turn daytime into an exceptionally grainy and dark sepia portrait from the 1800s? I want that same level of effort brought to bear on shouts and magic.

Stop getting in my way, bad guys. All I want is to walk through this cave in peace, picking up cool new weapons and armor. How the heck am I supposed to do that with you bozos interrupting me every couple of minutes?

Every time I swing a sword, cast a spell, or mine some ore I want my Facebook status to be updated appropriately. If I walk by that shrieking religious nutball in Whiterun, every line that he spouts should be transcribed and posted to my Twitter account. When I loot Bone Meal the game should automatically take a screenshot, upload it to Instagram, apply a rad filter, and call for all of my friends to Like it.

The one thing that Skyrim needs most of all is vampires. Werewolves are cool and all, but I don't know how I'm supposed to play a game in 2012 without any vampires at all. It's nuts. Someone please get on that.

Rainbow Moon
If you're in the market for a not-quite Final Fantasy Tactics that's also sort of an RPG for about fifteen dollars, this should almost satisfy you. 6/10

Kingdom Hearts 3D: Dream Drop Distance
A surprisingly good entry in this tired series is held back by a mechanic that dumps you off into another character's story when a meter runs out, often when you're in the middle of something important. 5/10