I now understand that Final Fantasy VII was sort of bad. Its story was incomprehensible, the gameplay wasn't special with the possible exception of the Materia system, and most of the side content was obtuse rather than difficult or interesting. At the time, however, I ate it up. The game was so huge and different that I read its haphazard and clunky nature as some sort of brilliant authorial intent, a puzzle with lots of pieces that would make sense in the end.

So, yes, I was a moron. Even then, however, I knew that Sephiroth was a terrible piece of shit. After all these years people are still using a million variations of his name in online games and voting for him in weekly "WHO IS THE BEST CHARACTER OF ALL TIME???" polls. It makes no sense. No one should have ever liked him. If they did like him ten years ago, they certainly shouldn't like him now. Sephiroth has always been garbage and he always will be.

Sephiroth comes from a machine mom. His mother is so dimly lit and full of rusty pipes that it makes him super sad. This, as far as I can tell, is the extent of his character.

No, wait, there's something about fire too. What was it? Ah, yes, he stands in fire at some point and is really calm about it, which signifies how tough he is. He holds a sword and looks backwards without fully turning around while in the fire. This is an important moment because it's a cool pose and fire means things. 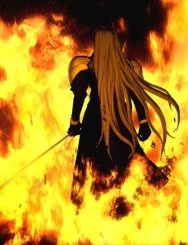 At one point he stabs someone and they die, I'll grant you that. As far as villainy goes, making a life end is worthy of a pizza party. He does, however, have Sephiroth as a name and Sephiroth hair as his hair.

To drive home how terrible Sephiroth is, I'm going to share some actual quotes of his from Final Fantasy VII. If you'd prefer your nostalgic vision of the game to remain intact, this would be a good time to stop reading. If you have any taste at all then you should have stopped reading when you saw my name at the top of the article.

"I have been chosen to be the leader of this Planet. I have orders to take this planet back from you stupid people for the Cetra."

"To obtain a blue Chocobo you need to equip a Chocobuckle and breed a yellow Chocobo with a white Chocobo, but only after winning several races with both Chocobos and feeding the male Sylkis Greens."

"My mother, a machine. Oh man. This is really emotional stuff. I always thought I'd meet my mom and take her on a picnic, but now that's impossible. Even if I could lift this dang thing there's no way I could fit it through the door."

"Don't you... remember? We were meant for so much more. This Planet should be our - please insert disc 3."

Diablo III
The most innovative and satisfying ARPG in years, nearly brought to its knees by overconfidence in its storytelling and an Auction House that undercuts the satisfaction of finding gear. 8/10

Tom Clancy's Ghost Recon: Future Soldier
It doesn't bring back the tactical magic of Rainbow Six and the first Ghost Recon games, but this is a far more creative military shooter than anything Call Of Duty has dispassionately churned out. 8/10

Game Of Thrones
Beneath the technical rough spots lies a surprisingly decent story and some RPG elements that are about on par with the first Dragon Age. 7/10

Max Payne 3
If you like the idea of removing the charming, creative elements from Max Payne and replacing them with Rockstar's signature brand of heavy-handed cinematics that clash with the gameplay, a few hours with this will probably change your mind. 6/10