The Darkness, News in Brief

After an astonishingly high number of readers wrote in saying that The Darkness would be the saviors of rock, Dr. David Thorpe has taken upon himself to tell them why it will probably never work. What's more, he has decided to educate you about what's going on in the world of music with a special news segment. Also, don't miss his invitation to send in your own crappy music for criticism. It might make you famous! 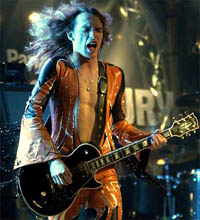 The Darkness: FunnyAfter my pronouncement in the last column that Huey Lewis and the News were the saviors of rock, roughly a thousand bajillion people e-mailed me to tell me that the true heirs to the rock throne were glam-metal pastichesters The Darkness. I’ve been getting quite a few e-mails about The Darkness ever since I began writing Your Band Sucks, mostly from people who mistakenly thought they were one hundred percent serious and wanted me to lay into them for being so ridiculously anachronistic. To think that The Darkness is all business is undoubtedly a symptom of a severely miscalibrated humor detector, but as one astute reader pointed out, being ironic doesn’t mean they don’t suck. I can see both sides, but here’s my take on the situation: The Darkness are an amusing novelty. Yes, I’m going to admit it, I do find them funny. Guys in catsuits who make elaborate mouth-gestures while they play bitchin’ guitar solos on a spaceship make me chuckle, and I’m not going to let anyone tell me that it’s wrong. The fact that they’re looking stupid on purpose definitely elevates them above other bands that look ridiculous unintentionally and just make me feel embarrassed for them (I’m looking at you, AFI).

However, if they wind up being the “saviors of rock,” I will kill myself. If a whole bunch of bands decided to be cheesy metal rip-offs, it would stop being funny and start being infuriating in a matter of weeks. The Darkness is stupid and funny, and at this point, pretty cool. If they hit it much bigger, however, their welcome is going to be quickly worn out through overexposure, and the joke is going to get old. The only way they could “save” rock, and I find this pretty unlikely, is if they made the public open to a freer and more diverse range of old and new styles with less attention paid to trends and more attention paid to what’s actually fun or good. Sounds pretty far-fetched, doesn’t it? Bottom line: better than Nickelback, but not going to change anything. Maybe they’ll release a second album that’s much better than the first and have another minor chart hit in the United States, but they’ll probably always be remembered for their novelty breakthrough hit (much like Sir Mix-A-Lot will always tragically be remembered for “Baby Got Back” instead of his true magnum opus, “Put ‘Em on the Glass”).

Getting on to business, it’s been a fairly ridiculous fortnight for music. I’ve probably laughed harder at the lunacy of musicians and the idiocy of the music press in these past weeks than I have in a long time, and I decided that it would make for some pretty amusing reading for Something Awful fans if I gave a brief rundown of the top recent music news stories: 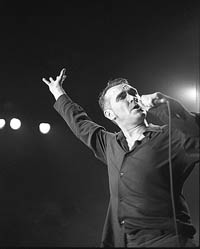 Morrissey: Unchanged--After a merciful seven-year absence, lugubrious Los Angeles stadium-filler Morrissey has decided to mope back into our lives with a new record entitled “You Are the Quarry.” Details of the tracklist have recently been announced and they’re certainly characteristic of the Mozzer, with the average song title tipping the scales at close to five words long. Here’s a fun little exercise: let’s see if you can pick out which of these tracklists is authentic and which one is false (since the devil mixes his lies with the truth, some real songs are in the fake one):

In related news, Morrissey has voiced his displeasure at American Idol in a recent interview on LA’s KROQ radio station, saying of the contestants: "I think they’re very sad and I feel sorry, genuinely sorry for them. I think they look a bit sad and they sound sad and they’re treated in a sad way… and I think it’s very unfortunate." Morrissey calling you sad? Ouch! My apologies go out in advance to the folks at morrissey-solo.com, who have even as I write this already gotten wind of its existence through the magical Morrissey ether and pronounced it “dreadfully boring.” 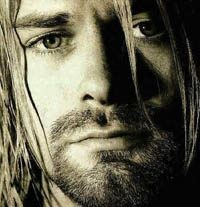 Kurt Cobain: Dead--In a frenzy of Gen-X nostalgia, Spin’s April issue is devoted to ghoulishly devouring the corpse of Kurt Cobain, who has as of this month been a-moldering in his grave for ten years. The issue features over 20 pages of the kind of tried-and-true Cobain-worshipping critical hyperboles that have been serving the music press so delightfully for so long; my favorite moment probably comes when they hilariously lament that “it’s hard to headbang to a saint.” Also particularly compelling is a humorous year-by-year write-up of Kurt Cobain’s life in an alternate universe in which he hadn’t died. I’m sorry, Spin Magazine, but being tongue-in-cheek doesn’t prevent something from being monumentally stupid. I have nothing but pity for the late Mr. Cobain; if one of the factors leading to his suicide was his notorious fear of fame, one can only imagine that if they have a subscription to Spin in heaven, Kurt is currently asking Jesus where he keeps his shotguns.

--NME reports that George Michael is currently considering offers from producers looking to stage “WHAM! The Musical.” Yes, it’s tempting to just throw our hands up and admit defeat and renounce western culture entirely, but we must be strong. Heartbreakingly disgusting as they were, WHAM! didn’t entirely kill popular music the first time around, and I’ll be damned if we’ll let them do it this time. Put a dozen eggs in the sun now, because while “WHAM! The Musical” won’t hit the stage for some time yet, it’s always best to start preparing early. 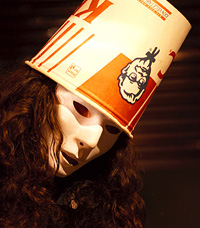 Buckethead: Weird--The enigmatic and undoubtedly foul-smelling guitar weido Buckethead has announced that he’ll be leaving the zombie parody of Guns N’ Roses that’s been shambling around aimlessly for the past several years, putting yet another bump in the long, long road to Chinese Democracy. Luckily, nearly everyone on the face of the earth has entirely stopped caring at this point; anyone who honestly foresees Axl Rose producing any worthwhile material ever again has either been in a coma for the past decade or is Axl Rose. Meanwhile, Buckethead is set to release two solo albums within the year, and if they’re half as awesome as Slash’s Snakepit, we’re in for a real treat.

--Puddle of Mudd lead singer Wes Scantlin has admitted to disorderly conduct after his drunken Toledo live show during which the band walked off stage and left Wes to incoherently ramble alone for an hour and a half. The judge ordered him to pay a $175 fee, and in his statement called him “retarded” and “a disgrace to music and to humanity.” No, wait, that’s what I called him just now. But honestly, as far as I’m concerned, justice has been served already; anyone who paid to see a Puddle of Mudd concert was probably either expecting a god-awful show to begin with or too profoundly stupid to realize anything was going wrong. 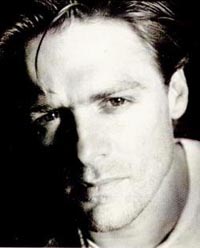 Bryan Adams: Whoops--Omnipresent alt-country pain-in-the-ass Ryan Adams has given pitchforkmedia.com an exclusive interview which can only be described as “hilarious” and “extremely embarrassing to both parties.” The interview was brought about, predictably enough, when Adams received several unfavorable reviews in the internet scenester rag and called them demanding the opportunity for a rebuttal. Both Adams and the interviewer are on the defensive, making for a pathetic display of self-justification from both sides. Adams, trying to shake of his reputation for being unpredictable and hotheaded, succeeds during the course of the interview in redefining himself as unpredictable, hotheaded, long-winded, egotistical, and probably crazy. Whatever happened to the Ryan Adams we grew up with who used to deliver such pop gems as “(Everything I Do) I Do It for You” and “That song with Sting and Rod Stewart from that awful Three Musketeers movie”? Don’t worry, I’m not senile, I’m only confusing him with Bryan Adams in the hope that he’ll leave a long angry message on my answering machine so we can all have another good laugh at his expense. If you want to read the interview, and I highly recommend it, just head over to www.pitchforkmedia.com and click the big huge banner proclaiming that someone finally acknowledged Pitchfork’s existence. 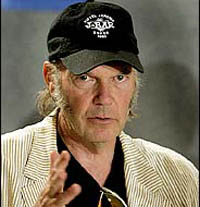 Neil Young: Fully Clothed--This month’s Rolling Stone celebrates 50 years of rock and roll, because apparently the only way to sell music magazines these days is to plaster “special issue” on it and get all weepy-eyed and nostalgic about something. The gimmick of this particular issue is a series of essays by musicians about artists who inspired them. For example, Red Hot Chili Peppers bass-goblin Flea writes an essay about Neil Young in which he applauds his remarkable resistance to selling out: “Maybe we could whore ourselves out for the right price someday. I don’t know. But I always think, ‘Would Neil Young do this?’ And the answer is no. Neil Young wouldn’t fuckin’ do it.” Then again, Flea, would Neil Young appear onstage wearing only a sock (knock on wood)? I don’t know. What I do know is that the mental image of Neil Young wearing only a sock just made me sterile. Elsewhere, Britney Spears fawns over Madonna with adorable semi-literacy, Chris Martin of Coldplay sloppily fellates Bono, and Roy Orbison’s legendary warbling is discussed by noted Roy Orbison look-alike K.D. Lang.

It’s all pretty depressing, isn’t it? That’s why I no longer listen to anything except the smash-hit party rap single “Tipsy” by J-Kwon over and over and over again. I suggest that you do the same. As usual, questions, comments, insults, and disagreements can be sent directly up your mother’s nose. Of course, if you have any ego-building praise to heap upon me or Something Awful, you can always reach me at davidthorpe@somethingawful.com.

SPECIAL YOUR BAND SUCKS ANNOUNCEMENT: After my “Saviors of Rock” article, a whole bunch of people e-mailed me asking where they could send demo tapes and mp3s of their own bands in hopes that I would shower them with praise and make them famous. I didn’t have time to listen to all of their mp3s and whatnot, but it might be fun to hold some sort of Your Band Sucks Demo Roundup in the near future. If you have a shitty band consisting of you and your idiot brother playing the tambourine together, please send me an e-mail with the subject “DEMO ROUNDUP.” Do not send mp3s as attachments, because I will not open them. If you want me to listen to them, upload them somewhere and I’ll check them out. No streaming bullshit, please, I want actual mp3 files (I will not post the address of the file anywhere and use up all of your bandwidth, I promise). If you want to send in a physical copy of a promo CD, e-mail me with the same subject and I’ll tell you where to send it. Even if you’ve already sent me a link to your demos, please do so again, because I don’t want to search through hundreds of old e-mails looking for them, because I am lazy and stupid. Ciao!