Partywhistling: Your Teen Could Be Next

New teen fad is a killer

SHAGGY BUTTE -- Evan Mollusque was, by all accounts, a normal sixteen-year-old boy. He got good grades, worked part-time at the local pepper mill and even made vice chairman on Shaggy Butte High's junior varsity basketball team. He'd never broken a bone, kissed a car or driven a girl. He'd never been in trouble.

Until, a little after midnight on March 30th, he was rushed to St. Eustace Hospital with severe dehydration, lesions on his lips and face and a dangerously elevated heart rate. He died ninety minutes later. It might sound unbelievable, but it's more common than you think, and your child could be next. Though the medical examiner's report is inconclusive, Evan may have been the latest and first victim of a sick epidemic spreading like wildfire in schoolyards and on the internet.

It's called partywhistling, and your son or daughter might be doing it right now. And if they're anything like Evan Mollusque, they could be dead already. 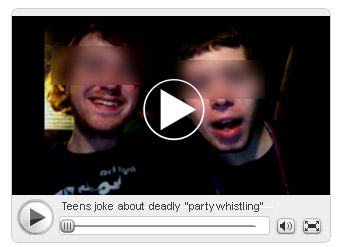 Partywhistling is just the latest in a recent scourge of youth fads to originate on the World Wide Web and wreak havoc on Shaggy Butte.

Just last year, the city was rocked by a plague of "cyberbullying"-- mechanically enhanced bullies picking up weaker peers and throwing them across football fields with their servo-powered superstrength. Then, KRUT 5 News broke the scandalous story of rampant teen "sexting"-- the unauthorized, non-maritime use of sextants in our schools.

But with fatalities shooting from zero to one in just a few months-- an increase of more than two hundred percent-- partywhistling may be the deadliest trend we've seen yet.

And the numbers are staggering. A recent anonymous poll conducted in Shaggy Butte High revealed that, after we told them about partywhistling, a shocking 90% of teens had heard of it. Based on our projections, an estimated 75% of teens-- your teens-- may have tried it themselves.

According to ninth-grade History teacher Jim Dobus, the disturbing practice is spreading every day. "I hear it in the hall while I'm teaching," Dobus told us. "I pop my head out to look, but it's too late. Nobody's there. Maybe they're dead."

"I've seen jelly bracelets, dubstepping and hanky codes come and go, and I've been to more than my fair share of rainbow parties," Dobus added. "But partywhistling, this is a new low."

Megan S., a sophomore at SBH, came to KRUT-5 News with a chilling firsthand account of a night gone awry-- awry with partywhistling.

"My friend Katy said we were going to drive up to Mile Rise, because some older boys wanted to determine its exact position relative to the moon. I didn't want to tell my mom what we were doing, because she doesn't approve of sexting, so I told her I was staying over at Katy's house.

"But when we got up to Mile Rise, I asked the boys where there sextant was, but they didn't even have one. And then one of them started making this noise, and it got pretty loud. Then we went home."

Megan is reluctant to reveal the names of the boys, citing concerns of retaliation. She feels too traumatized to press charges.

"I'm not really sure what the police would charge them with," she said.

It Came from the Infobahn

While experts are still unaware of the origins of partywhistling, some speculate that it originated on the Internet, where millions of teens meet each day to exchange harmful fads.

"To adults, the Internet is a place to order flowers, email pictures of your grandchildren and reconnect with old friends," said local KRUT resident sociologist Martin Rockhazard, "but teens see the internet differently. Every time they 'jack in' to the web, they're instantly connected to a secret hidden network of pirated multimedia disks, virtual pornography and criminal terrorism."

Like many of today's most dangerous activities, partywhistling spreads via social networks like Twitter.com, which lets tweens and young adults send secret messages to each other without their parents' knowledge. The KRUT-5 Investigative Team dug deep into Twitter's teen channels to uncover the following "tweets," all of which incite young people to participate in partywhistling:

#pw sixty of us teenagers are are gonna pw at mile rise 2nite... bring it on!!!!

#pw parents r away got big pw rager @ my house, no jesusfreaks allowed

While the abovementioned tweets were forwarded to local law enforcement, it may be too late; who knows how many little brothers have been indoctrinated into partywhistling already? The Twitter could not be reached for comment. 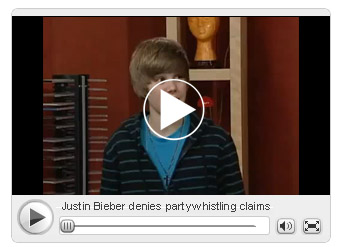 The Internet isn't the only place teens are looking for their influences. Pop music also plays a disturbing role in the partywhistling scene. Rap acts like Kid Tootie and Pucka Mouf have produced underground hits based on the partywhistling subculture, and kids have driven these ditties to the top of the death charts.

But it's not just rowdy ethnics who are capitalizing on the fatal fad: even squeaky-clean pop stars are dropping coded partywhistling hints in their mainstream releases. In the music video for his hit song "Fauntleroy 2010," tween hairthrob Justin Bieber can be seen pursing his lips in a manner highly reminiscent of teen partywhistling techniques.

Terrifyingly, local law enforcement is powerless to combat the epidemic without the swift passage of new anti-partywhistling laws.

"If it's what you're describing, there's nothing really illegal about it," Shaggy Butte police chief F. Juan Towerscrist told KRUT-5 News. "So my advice is for parents to get the word out to their kids about how it's important to make good decisions and everything."

But Evan Mollusque was a kid who made good decisions, until one wrong turn tragically took his life. And while the legislature sits on its hands, one of our children has continued to have died. More troublingly still, some local officials aren't even aware of the kid-killing partywhistle plague.

"That's not something I've heard of before," said DA Prince Rogers Nelson. "I can't even think of how a law against that could be worded."