Sunday, Dec 28, 2003 by Dr. David Thorpe (@Arr)
Everyone who considers themself a hipster should take note: name-dropping Pavement isn't going to win you any merit badges in my scout troop. You'd be a fool not to see that even the bands that everyone loves are just as terrible as the bands that everyone makes fun of. The only difference between Nickelback and The Smiths is that Smiths fans dress slightly better and don't beat their girlfriends as hard.

Let’s face it: if you want to be a hipster, there are certain bands you’re just not allowed to hate. If you walk into the cool-guy vinyl store in your town and start bad-mouthing Joy Division, it’s likely that the ninety-pound guy behind the counter who looks like he cuts his hair with a lighter will be forced to muster the last of his anemic strength in order to forcefully eject you from the establishment. When it comes to these bands, these sacred cows, there are no particularly compelling reasons why anyone should worship them, but years of critical adoration have practically canonized them as musical saints. However, I would be derelict in my duties as a grumpy, egotistical, impossible-to-satisfy music critic if I didn’t at least afford them a few swings of the hatchet. I can’t possibly cover all of the overrated indie bands in the world in one go, but I’ll start out with a few of the juiciest tidbits.

Chapter VI: The Sacred Cow That You Festively Slice… IS MURDER 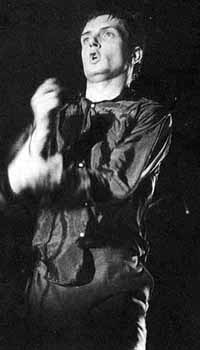 Thank you, Joy Division, for casting this seemingly never-ending shroud of gloom over the music world. It’s been more than twenty years since Ian Curtis killed himself, but it’s still not considered acceptable to make fun of his music for being plodding, joyless, heavy-handed, semi-incompetent crap. Let me try to explain Joy Division: in 1977, punk music came along as an antidote to soulless corporate masturbation-rock like Pink Floyd. The punks may not have been able to sing or play their instruments, but they had an undeniably infectiouss energy. Joy Division fell into the “post-punk” category, meaning that they couldn’t sing or play their instruments but they didn’t have any of the energy, either (unless you count Ian Curtis’s Elaine-from-Seinfeld style dancing or his occasional epileptic seizures).

Joy Division started out as just another terrible wannabe punk band. They formed after they saw the Sex Pistols play in Manchester and realized that it took absolutely no talent to form a successful band. Their name comes from a fascination with Nazism and militaristic imagery; the term “Joy Division” is an unsavory reference to unwilling concentration-camp prostitutes or something like that, and their live shows were occasionally backed by scenes of bombing and war. It’s miraculous that they were able to dodge accusations of being Nazis well enough that hardly anyone brings it up today. I’m not saying that I think they were actually fascists, but I do think their whole cooked-up fascist image was pretentious, ill-conceived, and immature. They eventually dropped that in favor or a more gothic/J.G. Ballard approach which suited them a little bit better, but I’m amazed at how easily people let them off the hook for the retarded Nazi idea.

They only managed to squeeze out two albums before Ian Curtis bumped himself off, which surely only adds to their legend. Had they kept following the path they started down, they surely would have gone in the same direction as Bauhaus or The Cure and started making dreadful gothic synth-pop (as evidenced by the fact that the surviving members of Joy Division formed New Order and made, you guessed it, terrible synth-pop). I hypothesize that if Ian Curtis had continued to live and exert his gothic influence over the band, they would have eventually sounded like Siouxie and the Banshees except with a terrible singer. I also hypothesize that Ian Curtis would now be fat. 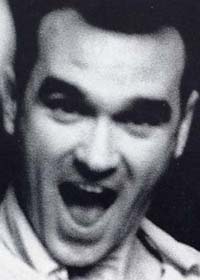 Thousands of pale nerds have found a savior in this man.

The Smiths, if you’ve never heard of them, were just a tornado of teenage repression, bad pseudo-literate jokes, failed attempts at witty turns of phrase, and Morrissey’s pained, tuneless holler. The appeal of The Smiths was the fact that it could make just about any angst-filled teenager feel better about himself because Morrissey was so much more pathetic than he could ever hope to be. Although Morrissey is often hailed as the poet laureate of whiny crybaby rock, many of his lyrics are as unintentionally hilarious as the 1975 melodramatic blaxploitation film “The Black Gestapo.” Here is a delightful example from his vegetarian tour-de-force “Meat Is Murder”:

Well, his clumsy poetry has me convinced. Morrissey, I promise you that I will never again butcher a live cow for no reason. The generally accepted highlight of the Smiths’ small catalogue of releases is the 1986 album “The Queen Is Dead,” on which Morrissey cleverly toys with his reputation as a gloomy, morose, self-pitying nerd by singing songs about being a gloomy, morose, self-pitying nerd. He’s perhaps the only rock star ever to namedrop both Keats and Yeats in the same song while at the same time misspelling the song title (“Cemetry Gates”). Score a point for intellectualism.

Perhaps the most hilarious chapter in the Smiths’ existence is the inevitable solo-project mayhem that ensued when they split up. Morrissey continued to be Morrissey, and released many terrible, self-indulgent solo albums over the years; in other words, he sort of like Sting except nobody actually buys his records. Well, actually, Sting never reinvented himself as a homosexual rockabilly greaser, and Sting never lost his record deal due to a total lack of interest from anybody other than a fanatical (and totally unexplainable) Latino following. Johnny Marr, the guitarist of The Smiths (and the only mitigating factor that made Morrissey anything but totally unbearable) has finally come out of the studio-musician woodwork with his recent “Johnny Marr and the Healers” project. Unfortunately for all the fans who had their hopes pinned on him, the album was eerily reminiscent of such hideous 90s guitarist-side-projects like The Seahorses and Hurricane #1. Johnny himself decided that he’d sing in his new band; tragically, he sounds a lot like Steve Miller. 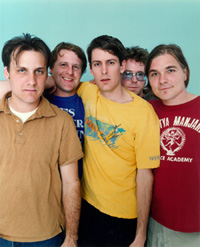 Don't pull that "happy, fun-loving guys" bullshit with me!.

You can thank Pavement for basically starting the trend of obtuse, tuneless, incomprehensible American indie music. For some reason, this little Californian band ripping off The Fall on an independent record called Slanted and Enchanted became the frontrunners of a closet industry of pale white guys yelping along to poorly-recorded feedback. The funniest thing about Pavement was probably the fact that their first album resembled what we now think of as American indie music mainly just because they were terrible. They couldn’t write a decent tune, their drummer was a burned out old punk nobody who couldn’t keep time, and their production values were bottom-of-the-barrel. Once they had some money and some practice and a new drummer, their songs actually started to take some shape. By the time they released “Brighten The Corners” in 1997, they pretty much sounded like an off-the-wall but capable pop band.

As you can imagine, their fans and the music press were overjoyed. No, wait, they weren’t! They were angry! Pavement had turned their back on their fans by actually getting pretty decent at playing music! Their songs were no longer two-minute scream-fests with banging guitars. They recorded with more than four tracks. Of course, indie musicians could never hope to imitate that in their mom’s basements, considering their lack of funds and talent. To this day, Pavement’s first album is revered by indie fans and their last two albums are almost universally sneered at. This is all the proof I need for my theory that the main criterion for making successful indie music is that it’s tuneless and musically terrible.

You might think I’m letting Pavement off the hook on this one, but I’m not. Consider this fact: Pavement’s lyrics rarely, if ever, make any sort of sense at all. Some people would like to think that they are bizarre, post-modern, and brilliant. I think a more reasonable answer is that Pavement never had anything interesting or important to say, so they decided to hide behind wacky, nonsensical lyrics. Pavement’s main accomplishment was revolutionizing a thoroughly detestable music scene and making it even more terrible, only to be eventually rejected by those who they inspired. Good work, Pavement! 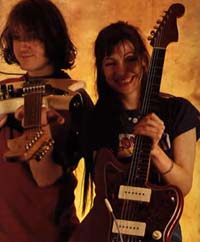 There's no such thing as a good band with a girl in it!

My Bloody Valentine are band who are largely known for one album, 1991’s “Loveless.” It’s one of those rare albums that really sounds like the album cover looks: it’s an indecipherable blur of noise and distorted guitars. It boggles the mind that so many goofy hipsters are so in love with an album with so little to offer. All of the songs sound basically the same, and you really have to pay attention to figure out where one ends and the next begins. The lyrics are so incomprehensible that they might as well not even be there at all. Although there are certainly noises on this album that have never been made before or since, none of them are particularly interesting noises. In most cases, it’s the sound of several guitars playing a couple of chords with a few layers of grinding and feedback in the background. Sure, it probably took quite a bit of time and money to make those sounds, but are they particularly interesting? No, not really; when it’s all put together, it just sounds like a waterfall of sludge running through your speakers. 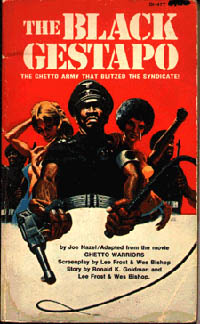 For some reason I needed to include this image: Throw the gun in the pool, motherfucka!

After “Loveless,” My Bloody Valentine managed to top themselves in the only way they knew how: by doing absolutely nothing for ten years. There still hasn’t been another album by them, although “sonic genius” Kevin Shields has done a couple of minor projects since Loveless, such as production, remixing, joining Primal Scream, and getting monstrously fat. This year marked his return to making his own music: he added four songs to the soundtrack to “Lost In Translation,” one of which sounds like a significantly devolved My Bloody Valentine song and the rest of which are immeasurably boring instrumentals. Was it worth the wait? Nobody cares, because they’ve all forgotten what they were waiting for.

Perhaps I’ll do this again sometime and take on artists such as The Pixies, Tom Waits, Echo and the Bunnymen, and whatever others people are pretending to have heard of next time I start paying attention. In the meantime, you can request slightly more contemporary bands for me to make fun of by e-mailing me at davidthorpe@somethingawful.com. Oh, and by the way, don’t call me “good sir” because it’s fucking stupid and not funny and about five hundred people have felt the inexplicable need to call me that.