The Return of the Cure

Dr. David Thorpe, with tears in his eyes and little attention-getting papercuts on his wrists, joylessly revisits his past as a goth in the 80s. Despite repeated rumors of a breakup, The Cure continues to taunt us with a ceaseless series of crappy singles, each more worthless than the last. Will they finally call it quits? No, instead we get a comeback album produced by the guy who produced Limp Bizkit. Superb!

Four years after Robert Smith announced that the Cure would split up, they’re back. Actually, that’s a bit misleading; it would be more accurate to say that four years after Robert Smith announced their breakup, they still haven’t fucked off. Rumors of a Smith solo album (a meaningless concept, considering the turnover rate of the Cure’s members) never materialized. Only a year after their “farewell” album, Bloodflowers, fans were treated to a greatest hits compilation featuring two conspicuously god-awful brand-new tracks. Stadium shows and festival appearances continued. A new single and a thirteenth studio album, captained by prestigious Korn and Limp Bizkit producer Ross Robinson, are set to hit stores soon.

Most music buffs would agree that announcing that one’s increasingly un-hip and well-worn band is splitting up and then not following through with it is a major drain on credibility. Robert Smith, in his statement to the press about the split, announced plans to do new and different things: “I can't do that in the context of The Cure because it would destroy the dynamic that exists in the band. It's just easier to walk away.” After such an unambiguous “the formula is getting old” statement, continuing to plod out the greatest hits on the big-money festival circuit and pandering to idiotic young American audiences with nu-metal producers and Blink 182 collaborations seems, to put it mildly, revoltingly pathetic (the official party line from the Cure camp is laid out in an interview in this month’s Spin magazine: Robert threatens to break up “to keep the band on their toes.”). The possibility that this man is intentionally trying to undermine his band’s credibility as some sort of a twisted joke is probably being tossed around as a tantalizing conspiracy theory among old-school Cure fans. 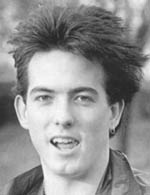 No wonder he wore makeup.Things didn’t start too auspiciously for The Cure; in the beginning, they were nothing more than the most tame and conventional of the post-punks. They were surrounded by bands that, while not as commercially viable, were far more innovative and original. Joy Division had more poetry and artistic credibility. Bauhaus had a more amusingly insane singer and a better guitarist. Gang of Four was smarter and better-dressed, and Siouxsie was better looking. All of these bands had devoted cult followings, but only The Cure broke fully into the mainstream. While casual pop fans may regard the Cure as something of a fringe-dwelling, artsy novelty, those who look deeper often regard them as the dregs of the post-punk era, hacks who rose to the top on catchy hooks, silly makeup, and easy-to-digest concepts. Even the more charitable critics generally regard them as a “singles band”; they’ve got a good catalogue of catchy singles, but with few exceptions, their albums are to be avoided.

Perhaps Robert Smith is finally embracing this legacy of successful failure. Immediately prior to the most recent breakup scare, The Cure seemed to be taking one last stab at artistic credibility. Bloodflowers was promoted as a return to their darker goth-rock days, as a close to the “trilogy” (a term which, when applied to albums, is always a warning sign of pretentious crap) started by Pornography and Disintegration. Robert Smith, probably annoyed by The Cure’s unshakeable reputation as a singles band, was attempting one last cohesive record to close the decade which brought about mostly shame. 1992’s Wish and 1996’s Wild Mood Swings were entirely forgettable albums, each containing barely enough decent material to fill one of Robert Smith’s thousands of empty lipstick tubes. 1998’s compilation single “Wrong Number” was absolutely inexcusable; it was as garish and outdated as the visage of its singer. Bloodflowers, then, would be an album to appeal to the longtime fans, a rejection of the tacky pop of The Cure’s recent past. Instead of a return to form, however, it was an indistinct blur of autopilot Cure moping, worse-than-usual singing, insincere depression, and career-retrospective nostalgia. If I ever find something more heart-wrenching than a chubby, happily married, and extremely wealthy goth whining about turning forty, I’ll probably have to cast myself into the cold, roiling sea. 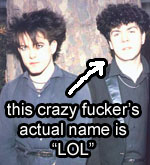 Not very jovial for a band with a man named "Lol" in it.Having painfully shat out this angular bookend, their career seemed to be closing on a remotely acceptable note. It wasn’t exactly a return to form, it wasn’t exactly a comeback, but at least it wasn’t another painfully contrived grab at chart success. They attempted to set things right, they failed, and they could move on. They promised their fans the exciting prospect of closing the book on them, of being able to consider their career from a historical standpoint; no longer would their audience have to say: “Yeah, I like the Cure. Well, aside from the crap they’re doing now.” When musicians break up their bands or die, the disappointing latter halves of their careers usually get swept under the rug of history, never to trouble their fans again; when people talk about The Jefferson Airplane or The Ramones, for example, their descent into sub-mediocrity usually doesn’t enter the discussion as anything but a footnote. However, when we’re constantly staring down the barrel of another terrible new Cure single like “The End of the World,” it’s hard to forgive and forget; for those that haven’t heard the song yet, it’s an insipid, gothed-down retread of “Mint Car,” which wasn’t even a particularly good single to begin with.

So what was it that made Robert Smith decide to make, after only four years, what is clearly designed as a comeback record (right down to the eponymous title)? Around the time of his public musings about ending the band, and around the time of his successful greatest hits album, 80s rivals New Order and Depeche Mode both made successful, high-profile comeback albums. As if that weren’t enough to sway him, increasing intelligence reports of an impending comeback by his nemesis, the fiendish arch-crooner Morrissey, began to come through the wire. The climate for another nostalgic money-grab was perfect. He probably thought he could get away with it without too much damage to his reputation, too, since he has a long history of wishy-washy hints about splitting the band up. 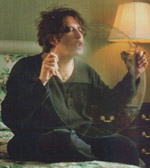 Robert Smith's miniature homunculus cleans Robert Smith's contact lens.Well you know what, Robert Smith? You’re not getting my cash, you money-grubbing, wooly gothic bastard. You can’t release three crap albums in a row and then expect everyone to come running back whenever your accountant/muse dangles a solid-gold carrot in front of your fat, pallid face. Not only am I wary of your motives, but I’m entirely fed up with comebacks in general. They’re never any good, despite what initial reviews will always tell us. You Are the Quarry is Morrissey’s best work since The Smiths? Hog fucking wash. After that fiasco, I’ve absolutely had it with washed-up 80s tearjerkers clamoring for my dime. Maybe, Robert Smith, if your comeback had happened before Morrissey’s, I would have given it the benefit of the doubt. He too relied on a “hip” new producer to modernize his sound, and all that resulted was an infuriating pro-tools mishmash of cheesy mellotrons and Dido-esque canned beats. Fool me once, shame on Morrissey. Fool me twice, fuck you in your teased-out weave, you aged, bloated new-wave fatcat.

If any aging goths want to cry me a river, I can be reached at davidthorpe@somethingawful.com. If you’re a non-goth and this article has made you curious about The Cure, buy their goddamned cash-cow of a greatest hits record and skip the second half.

Has anyone else noticed the striking similarities between Velvet Revolver’s new video and hilarious Bauhaus videos of yesteryear? I have, because I’m smarter than you and it’s my job to notice horrible, disturbing things like this!