The Art of Warcraft: A Year in Review

Monday, Dec 05, 2005 by Caylen "Abraham" Burroughs
WoW: it's been more than a year already, despite the few of you out there who might be "Months Behind". In such a short period of time the game's has got the attention of casual gamers, poopsockers, rival Game Developers, and a few homicide detectives looking for answers to more than a handful of child neglect cases. This article was extremely well researched in the better part of an hour - see if you can spot the places the author blatenly plagarizes other news outlets. Enjoy!

In 2001 A.D: World of Warcraft was beginning. Blizzard, hot on the very successful release of Warcraft 3, announce plans to release a Massively Multiplayer Game set in the vibrant lands of Big Game Hunters. Gamers around the world rejoice in hopes of what is a unique MMORPG, which provides a casual gaming atmosphere in which all players can take part in. The fan base was certain that WoW would be different from the Fantasy-Based dragon slaying 4-Hour-Long raiding-based endgame that occurs in current subscription based games. Blizzard states work will begin on the design, once other in-house projects are completed.

Fall 2002: Blizzard’s developer team beat Everquest. Instead of waiting for SOE’s monthly expansion pack, game designers decide to take matters into their own hands and begin to work on World of Warcraft. 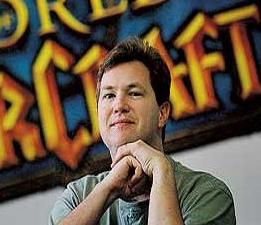 Winter 2003: Alpha debuts at GenCon 2003. Press folks and convention goers are impressed by the game's beautiful looks, as well as the lack of other players. When representatives of WoW explained the game was in fact multiplayer, and a good deal, observers expressed disappointment that they would be forced to interact with other people.

January 2004: Open Alpha is released to the close friends and estranged spouses of Blizzard. Testers remark how easy it is to operate the user interface, the joys of the tooltip system, and how quests subtly guide you to the next place you need to be. Some testers express concern that the Protoss’s defensive capabilities are overwhelming in PVP, and that their damage output lacks proper output. Other testers remark that all Blizzard devs are “a bunch of money-grabbing workaholics that never spend time with their wives, and if Polymorph’s cast time does not drop by 2 seconds, they are leaving with the dog and kids.

March 2004: Tired of listening to their fathers and college roommates complain about latency, Blizzard begins Closed Beta. The public lucky enough to participate in this chance to help refine the game immediately complain about bugs, latency, lack of content and class balance. Blizzard issues its first decree that all of these concerns are in fact “Working as Intended”. The Protoss are reclassified into Paladins, an Alliance only character class. Due to player demand, the Zerg Slithid remain scattered about Kalimdor. The mage spell “Arcane Missiles” is patched, and is now working as intended.

June 2004: Tigole, a developer for Warcraft, posted on the Fires of Heavens guild forums that they were developing a top heavy game and that there would be more content for level 60’s than there was from 1-59. The news heralded an age where Blizzard could do no wrong, and lasted until the game was released and it was proven that there was 1 raid dungeon and dragon available for the first six months of release.

July 2004: The instances “Shadowfang Keep” and “Blackfathom Deeps” are introduced to the game. This is the only time in the history of WoW that these dungeons are actually played by players. Many beta testers are made furious by Blizzard decision to wipe all beta characters, forcing players to replay the early game. In protest, many decide to overload the mail system on worlds, creating enough latency to render mailboxes and auction houses useless. Their recklessness continues on to this day.

August 2004: Blizzard makes World of Warcraft an open beta for anyone to participate, free of charge. The beta client and account registration is made available to Fileplanet.com premium subscribers, at a modest ten dollar a month subscription fee. Player feedback shows to be absolutely worthless, since most bug reports consist of requests for gold, experience and a Stone of Jordan. Early numbers report Alliance consisting of 20,000 unique avatars, while the Horde population on the test server reached 3000 (an all-time server high that has yet to be surpassed). 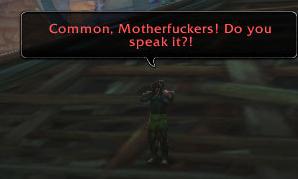 I do not wish to purchase this Frostsaber, it is scratched.

September 2004: Stress test for World of Warcraft goes live. More than five times the player base Blizzard expects signs up, surprising even the high guesses of the industry. The servers are dangerously unreliable, going up and down faster than my ex-girlfriend’s see-saw prototypes. Blizzard comments that more servers and better hardware will be prepared to accommodate player demand, and the game will not be rushed until it is completed to the high standards we have come to expect of their company.

October 2004: A limited edition of the game is announced, for collectors. The box set includes a

A “Making Of” DVD documentary, which details how the programmers were able to score copious amounts of narcotics in Irvine, California.

A 15-day free trial game key, so your loved ones can visit you in game and see how you are doing.

An exclusive in-game pet – Players could choose between a baby Panda, mini-Diablo, or infant Slithid.

A super-absorbant cloth map of Azeroth, capable of handling the biggest spills.

November 23rd, 2004, 9:25am: Vindevi Universal publishes World of Warcraft in North America, Australia and Tasmania to much anticipation. Surprisingly, everything goes off with a hitch, except for a nine or ten major kinks. The 15 players able to log into the game remark that it was everything they waited for, further teasing the 239,985 customers who also purchased the game that day. Copies of the software become extremely difficult to purchase, with copies surfacing on eBay for three to five times the retail price. This leads media outlets to declare World of Warcraft “the must-have game console this Christmas”.

December 3rd, 2004: Players complaining about latency, certain game servers being completely unavailable for days and how bright the sun is outside are awarded 10 days of gameplay free for the inconvienience. 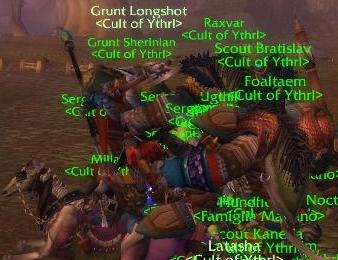 December 6th, 2004: A Patch is introduced that removes the time-zone tabs from the Server Selection screen, fueling conspiracy theories that all the game's active servers are in fact together in the same location. Community Representative “Caydiem” debunks these rumors in a rare video webcast accessible on the main WoW site. In an unexpected and hilarious blooper, an unnamed tech in the background stumbles over a wire, cutting the feed to the Community Manager's address.

December 7th, 2004: All servers brought back online after emergency 29-hour maintenance. The first Tier 0 gear set is gathered – the Druid stated he was extremely happy with the bonuses Shadowcraft granted at 8 pieces (although the boots could use more Intellect).

December 10th, 2005: The Feast of Winter Veil in-game holiday goes live during a content patch. Snowballs introduce to players a new and exciting way to be an asshole to your casters resting for mana during instances. Other hotfixes include the long awaited fix to the mage spell Arcane Missiles.