Ever since the release of Battlefield: Bad Company 2, I've spent a majority of my free time blowing up vehicles and getting shot to death. Unfortunately, I've also spent a majority of my free time cursing EA and Dice's lack of quality control in their latest bug-filled mess. A mere few minutes ago, I was forwarded an email from an anonymous tipster working at EA, and my heart nearly stopped once I read the title. Let me present this incredible news to you in full.

Awesome news everybody! We just got the big "thumbs up" from the guys at EA, and we're ready to roll out PATCH 1.1 for the consoles!!! Hell yeah!

Now I'm well aware you guys have been working overtime to address all the difficulties our users have experienced trying to play Battlefield: Bad Company 2 online. With that in mind, I'd like to personally congratulate each and every one of you for successfully ignoring all complaints and issues raised by the BC2 community. This act alone provided us with additional time to work on patching the hole in the drywall near the snack machine. Once we finished that, we were able to concentrate on patching BC2 for the remainder of yesterday.

Just so we're all on the same page, here's the comprehensive list of bug fixes, changes, and new additions 1.1 will bring! 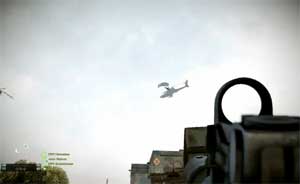