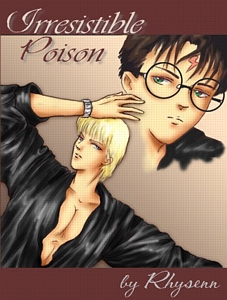 "In that case," Draco whispered, his voice sounding caught in breathless anguish, "No, it didn't."

He seized Harry, pulled him forward and kissed him hard.

Once more Draco caught Harry completely off-guard; nothing more than a startled 'oomph' escaped Harry's lips before Draco's mouth sealed over them. Harry took a step back, and promptly tripped over, falling onto the floor with Draco on top of him.

Draco's lips were soft, but his manner was hard; Draco held Harry down on the floor and kissed him thoroughly, his fingers raking through Harry's dark hair, holding the back of his head firmly. His grip on Harry's arms was tight enough to bruise, betraying the sheer pain he held inside of him, which bled to the surface as his fingernails dug deep into flesh. His nails would have drawn blood, if not for Harry's sleeves, which covered over the bare skin.

Harry turned his own face away from Draco, breaking their lip contact; Draco's body felt hot, almost feverish, lying on top of his own.

That was from a story labeled PG...there are many rated R. The horror of this page exceeds anything I've ever seen before, you just have to see it for yourself to understand the magnitude of this.

All stories are slash, consider yourself warned.

Dear sweet god. I hope you guys can find some constructive criticism to put in their guestbook.