At a Glance: While browsing through the cobweb-infested “$20 and under” section at one of the several Gamestops that are spreading through the downtown Tukwila area like a contagious disease (symptoms include low prices and fantastic savings), I happened upon a game called “K. Hawk – Survival Instinct.” Now I’d seen a lot of stupid-looking budget software boxes, but none that featured a muddy, pixellated forest being gazed upon by a freakishly tall plastic woman with a gun stapled to her ass. Intrigued, I opened the box flap to discover that K. Hawk was a third-person stealth game along the lines of Metal Gear Solid, and that the box gives some great tactical advice, like “Do not be seen. Do not underestimate the enemy. Do not surrender.” This meant it was probably a bad idea to stick with my original plan to beat every level by running out right in front of each enemy and flicking him in the eye while chanting “You can’t hit me, dummy! In fact, you’re such a dummy that I SURRENDER!” Clearly I would need to purchase the game and find a new tactic to use if I ever wanted to reach the final level and find the ass-shaped staple remover.

Developer: Similis Game Development (Warning: Do not visit their website under any circumstances.) 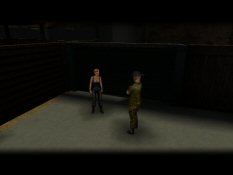 The training budget has been slashed so badly that they can't afford to texture their walls.

This is a perfect example of why budget companies almost always stick to first-person shooters – creating a second-rate FPS is incredibly easy. Open up Pie in the Sky, spend an hour dragging boxes next to each other, steal a few enemy models from other games or from Poser, make a few MP3s with the trial version of FruityLoops, and you’ve got another smash-hit FPS ready to send off to Valu-Soft’s pain factory. Creating a stealth game like Tenchu or Metal Gear Solid, on the other hand, requires you to spend time crafting a natural control scheme, detailed maps and most importantly, intelligent enemy AI. I really wish someone had mentioned this to the people at Similis, since their concept of a stealth FPS seems to be exactly like a normal FPS, except you can only take a few hits before you die and the enemies all have nothing better to do than patrol endlessly between two points while failing to notice when a woman loaded down with 80 pounds of weapons stumbles noisily past them while they stare intently at the wall.

This game chronicles the incredibly stupid life story of an incredibly stupid helicopter pilot named Kitty Hawk. But before I jumped into the main game to begin the story, I decided ol’ Kitty should spend some time in the tutorial level. The tutorial level is just a series of boxes awkwardly joined together, much like the rest of the game. The difference is that the tutorial level features a poorly voiced drill sergeant who tells you “not to embarrass our beloved corps.” His training program consists of the following:

Stand in one spot with his arms folded barking out orders while swinging his head around like he’s trying to swat a bug with his nose.

Turn around and take off running at full speed, usually running into a wall.

Turn back around and tell you to follow him while a security camera swivels around and tries to film you. Sometimes the camera doesn’t actually film you, and when it cuts to the camera view you don’t show up anywhere on the screen, but the game still decides that you failed. If you fail, he says you only have one more chance and then “sets everything back up again” by continuing to stand there swivelling his head around. You can try as many times as you want.

Repeat until the player escapes the tutorial level with the help of the Quit command. 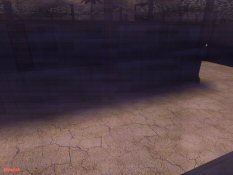 I was caught red handed! Well, actually I'm not in the camera's field of vision, but my drill sergeant says it was close enough!

With the highly informative tutorial over, I bravely embarked upon my journey to do whatever it is “Kitty Hawk” was supposed to do. The opening movie shows the Hawkmeister flying a dirty helicopter over an ocean of blue cellophane. There’s a whiny guy in the backseat wearing black face paint, and at the beginning of the opening movie he complains about his mission by declaring “This is actually complete insanity!” The dialogue in the opening cutscene, by the way, is made far more awkward by the fact that they never hired a voice actor for Kitty, so she has to respond to everything with nods and gestures. When Captain Dirtyface describes his mission, she responds with a very slow, clumsy thumbs-up, which would look more like a thumbs-up if her hand didn’t look like a lumpy glazed ham that lost several chunks of meat in a scissor attack. Suddenly, catastrophe strikes! Someone on the nearby island, annoyed about the foolish Americans flying big noisy helicopters around for their stealth missions, fires off a missile from an anti-aircraft battery. The missile slowly slides out with no noise whatsoever, then slowly accelerates as it heads for Kitty Hawk and her annoying blackfaced sidekick.