Wotan's Tyger Town, submitted by Chris. Allow me to sum up this site in one elegant word: RAPE. I use that word because this site is an unnatural violation of just about everything I consider sacred, which is pretty much already limited to one or two things these days. Wotan, our host, kindly makes note of the fact his page is best viewed with eyes. I agree, if he meant to say that his page is best viewed using the eyes of your most hasted enemy. I for one did not enjoy soiling my own eyes looking at this mess. What's so bad about this site? First, just about all of the text is conveniently colored to blend in with whatever crappy background image he's got going on. Although I guess the text is camouflaged, like an animal would be in the jungle. Second, he's got shitty furry art on his site. Third, he's got shitty furry erotic fiction on his site. And finally, he's got shitty pictures of other furries. You can't get much worse than that. No sir, you can't. 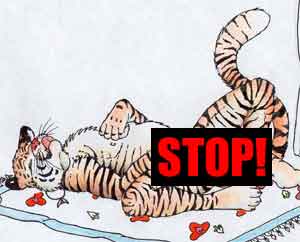 I mentioned this site has shitty furry art, and boy howdy does it ever! Wotan isn't quite as bad as some of the furry artist out there, like say the ones that draw giant curvaceous horses with gigantic genitals rocketing out from their anthropomorphic bodies. But he's still far beyond good, and I don’t mean that in a positive way. This guy apparently likes to sit around drawing animals that are aroused or are arousing themselves. Many of his drawings, while crude and poorly made, depict animals in a realistic fashion, too. I don't know what's worse, the fact we actually have to have laws against bestiality, or the fact they just aren't enough these days. But hey, I'm narrow-minded because I don't find animals sexually attractive.

There is also the mind-numbing section of furry stories you'll definitely want to read. Who doesn't like reading about gay animal sex? Definitely not me!

Wauan licks for a few moments, tongue making scratchy sound as tongue barbs rasp against barbs on penis, then stands back up with a sad moan, and a stretch. As Wauan stretches, still hard penis maddeningly flicks from his sheath once more, and he feels wetness squirt from it, and onto the ground underneath him.

If you aren't too hot and bothered by that crime against humanity, check out the furry picture section for classy photographs of beautiful specimens such as this one. I bet he's single!