Wednesday, Nov 06, 2002 by Rich "Lowtax" Kyanka (@TwitterHasBannedAllMyAccountsEver)
Know of an awful site? Send it to us and become a hero! 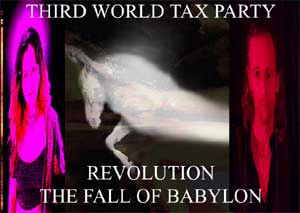 The Sword of Justice is the Sword that is issued from the mouth of the Christ at Judgement Day.
War of Armageddon and the 1000 Year Agricultural Revolution.
The 7th and Final Revolution against Capitalism.
The wheat are to be separated from the chaff and the chaff will be cast into the fires of the Final Holocaust.

When twenty years of the Moon's reign have passed, another will take up his reign for seven thousand years.' 'twenty seven years shall his war last; the unbelievers are dead, captive, exiled; with blood, human bodies, water and red hail covering the earth.,

Armageddon.
Final War between good and evil, Communism and Capitalism.
Death to Capitalism.
The Return to year Zero

Although I'm sure the whole "Greak King of Terror from the year 1999" thing scared the pants off you, and I can personally vouch that my pants are long gone, the horrible graphic design, new age music, and incomprehensible text will undoubtedly turn your brain into a substance resembling something which is regularly excreted from the anus of many famous barnyard animals. That's really not a big issue though, because having shit for brains helps you fully grasp the true meaning behind such deep and meaningful messages as the following:

Court Case: Monday 8th July, 2002, at 12.15 in the High Court of Justice Thomas More Building (1st Floor) Royals Courts of Justice, London WC2 2LL, No 213 /SD/2002 between Her Majesty’s Customs and Excise and myself. They are seeking bankruptcy and I am counterclaiming for the Sterling equivalent of 3.5 billion (thousand million) US dollars. I accuse Queen Elizabeth and her narco-terrorist legislature, judiciary, police, military, government, banking institutions and criminal collaborators in Her Majesty's Customs and Excise of state narcotics trafficking and terrorism in collaboration with MI6, CIA and major British banks of the Masonic cultists. Version 2.

I sure hope you won this landmark case, Mr. Insane Goddamn Lunatic, sir! You could sure buy a lot of tinfoil hats with all that hard-earned cash!