The Adventures of Burgh Man

Thursday, Mar 20, 2003 by Rich "Lowtax" Kyanka (@TwitterHasBannedAllMyAccountsEver)
Know of an awful site? Send it to us and become a hero!

The Adventures of Burgh Man, submitted by Andy. In this time of uncertainty and turmoil, we don't have too many superheroes we can turn to. Can you recall the last time you heard about Aquaman saving some orphan trapped in a burning tree? I sure as hell can't, and I'm Aquaman's biggest fan! After all, any superhero can walk or fly around and solve crime on dry land / dry air. However, the Earth is like 98% water; while these so-called "superheroes" are out punching people on 2% of the surface, the other 98% has to be patrolled by a select few self-sacrificing individuals immune to the effects of water pressure and angry starfish. Exactly how "super" is Superman when he ignores every crime taking place in the Pacific Ocean? I'll tell you how super: NOT VERY! Now if Superman wasn't bad enough, we've got Burgh Man here, some dopey schmuck who limits his patrol area even further, promising to only show up with advance notice in downtown Pittsburgh. Even when he does make an appearance, he really doesn't do much of anything except stand around and look like an idiot while people stare at him and attempt to determine why he's standing around and looking like an idiot. 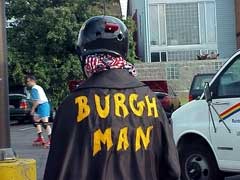 BurghMan™ is taking to the streets to help make Pittsburgh a more fun and better place to live. Hire him to come to your community event. Are you looking for large crowds at your establishment? Let BurghMan™ Pittsburgh's Newest Super Hero attract new business for you: He juggles, spins plates, does magic, balloon sculpting and a host of other things, on rollerblades also. 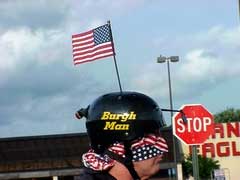 Watch him with his lighted costume and lighted special effects. He is sure to be a crowd pleaser. Not to mention his super powers!

Burgh Man has the super power of multiple chins! Burgh Man has the super power of "wearing a helmet with an American flag sticking out of it!" Burgh Man can leap curbs in a single step! Burgh Man can save a french fry from laying on the ground! Burgh Man will dream about having sex with your wife while you're away on a business trip! If you desire Burgh Man to show up at your social event and scare all guests away by eating your food and smelling like a broken sewer line, expect to pay an outrageous price for him, as he has previously appeared in such important places as The Coal Miners' Museum in Winder, PA, and the Carrick Corn Fest outside of the Carrick High School Field. Can Burgh Man ever be stopped? Only his arch-nemesis, Captain Cholesterol, knows!