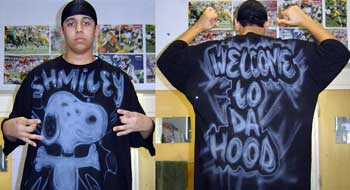 Like any devoted webmaster, I let myself get sucked into the EQ2 hype and not only purchased a couple preorders of the game, but I additionally took part in the closed beta for a few days. At the risk of pissing off legions of overweight, moist World of Warcraft fans who have nothing better to do than write me depressingly furious emails proclaiming their religion - er, I mean online role-playing game - is the best, I have to admit that EQ2 seems like a very entertaining, beautiful game. I only played a couple days and didn't really delve too deep, but what I did see could best be described as "a very polished version of the original Everquest." They took most of the bad things out, improved most of the good things, and basically released an Everquest 1.1 which isn't truly a sequel but more of a "this is what the original Everquest should've been if we had decided to not make it suck" title. Of course I realize I am a tremendous nerd loser faggot for talking about online roleplaying games, but Jesus Christ people, I'm a professional webmaster here. I write about furries and Juggalos. Did anybody ever expect me to embody the epitome of coolness?

Since I am an extremely avid roleplayer in real life (I often roleplay as a middle-aged Internet loser), I decided to create a character whose mentality and persona I could easily grasp. I needed an online avatar that reflected my true inner desires and goals in life, somebody who I felt was an emotional clone of myself. Naturally I chose Terry "Hulk" Hogan, the Hulkamaniac, a complex and educated man who I felt had the most to offer the dynamic world of Everquest 2. Of course roleplaying as such a character would require a significant amount of skill and dedication, so I spent a good 12 hours getting into character with my girlfriend. "MEGAN!!!" I would shriek into her ear at 3:30 AM. "WHAT CHOO GONNA DO WHEN HULKAMANIA COMES FOR YOU?!?" She would abruptly wake up and adopt a facial expression which resembled confusion mixed with horror mixed with we're breaking up again, but I would avoid her furious gaze by hiding in the closet for the next hour, at which point I'd creep out and scream, "YOU MAY BE TRYING TO SLEEP, BUT THESE 24-INCH PYTHONS WILL PUT YOU INTO THE SLEEPER, SISTER!!!" I highly suspect the only reason Megan and I are still together is because nobody has invented a way to file for divorce without first being married.

Hulkamaniac's adventures in Norrath or Norbert or whatever the hell the Everquest world is called began on Newbie Island, a lush and beautiful chunk of land filled with deer, slime, crabs, and people running around asking "NEBODY WANT TO GROUP, LEVEL 2 BARBARIAN LOOKING 4 SINGLE WHITE MAGE ASL???" Hulkamania burst out of the docks and spread into the land like a wildfire.

Hulkamaniac, a rampaging level three Barbarian from the enchanted town of THESE BIG GUNS USA, seemed to be enjoying his time in Everquest 2, crushing innocent crabs and standing in front of people when they tried to click on a nearby merchant. But something was wrong; the Hulkster noticed he didn't feel quite right and suspected he might be suffering from an incurable status condition known as "encrustment." Yes, that's correct, Hulkamania was "encrusted," a deadly, horrible, rare condition which nobody knows how to remedy, mostly because I made it up. Hulk Hogan began frantically running around town, shouting and whining about how he was encrusted, desperately requesting advice on how to cure this terrible disease. Many citizens and players chose to ignore the Hulkster and his 24-inch pythons, opting for a life of ignorance and apathy. However, some day the joke will be on them once they themselves are encrusted and flock to Hulkamania, begging for help and pity. The Hulkster will look down at them, slowly shake his head, and say "BROTHER, THIS IS WHAT HAPPENS WHEN HULKAMANIA COMES FOR YOU!" Then he'll maybe break a folding chair over their back or throw them into the bleachers, I don't know.

One kind and caring individual named "Digzz" valiantly refused to run away when Hulkamaniac approached him, screaming about Hulkamania and his grudge with Brutus "The Barber" Beefcake. The Hulkster began to warn Digzz of encrustment, asking what encrustment was and how to save himself from a life of encrusting. Digzz claimed, and I quote, "[it] means you were hit by an enemy spell, should wear off." Why thank you very much for the accurate and knowledgeable information, Digzz! Apparently the status condition I made up was a result of an enemy spell and it would eventually dissipate! This was very helpful advice, and I can only assume it also applies to my other made-up status conditions of fancypantsitis, bolognerama, and advanced muttonry. I thanked Diggz for this information shortly before he ran away to kill gnolls or orcs or trolls or hobbits or whatever. At this point, I began noticing some very annoying and rude things being shouted through the town, so I rushed into the crowded city to put an end to this nonsense. I was Hulk Hogan and, by god, it was my job to dispense heaping helpings of Hulkamania on any loudmouths who sought to spread their anti-American propaganda! Upon reaching town, I was shocked and appalled by who I met... my arch-nemesis "Rowdy" Roddy Piper!

Like usual, Piper was talking shit about me and making all kinds of ludicrous claims. I grouped with him so we could settle the score man-to-man, which we accomplished by killing some kind of skeleton / pirate / gnoll / librarian thing in a small graveyard. The vanquished foe dropped an earring of some type, which I picked up and immediately wore for its good looks and charm. I was hoping it would drop a yellow and orange bandana, but I do not know if the EQ2 developers ever added such an item to their game. Despite my lack of a bandana and rippable clothing, we continued on our quest to spread Hulkamania to all the local residents. We ran into some guy named "Jael" who we strongly suspected was our arch-enemy Ric Flair, so we began mercilessly taunting and mocking him in order to break down his spirit and reveal his true identity.

Ric Flair responded by repeatedly claiming he wasn't "Ric Flair" and we had mistaken him, but we'd know that hair anywhere. Eventually we got tired of screaming at him and claiming he cheated against Dusty Rhodes, so we brought our epic battle to the town of Qeynos, where the all-out brawlfest continued inside a busy hotel where players were constantly entering and leaving for no real reason.

Unfortunately, our struggle seemed to block any innocent individuals trying to enter their hotel room, and some infuriated players lodged formal complaints with the manager of the hotel chain. We did not care about such trivial matters as hotel rooms and clueless people avoiding our suplexes of righteous fury! If the monk ranger paladin wizard version of Tom Bodett wanted to sue us for however many silver pieces, we would accept it and move on. The Hulkster and Piper have been waging an eternal battle for nearly two decades now, and it's only logical that their struggle has found its way into the high technology world of Everquest 2. Some of you may claim that Hulkamania will ultimately prove triumphant, while others may believe Roddy will eventually dominate, while the rest of you simply feel online roleplaying games are for gay faggot homosexuals, but there's one thing we can all agree on: friends don't let friends become encrusted.

And yes, this update does mean I'll be bringing back the Everquest section of SA.