Tuesday, Mar 25, 2003 by Rich "Lowtax" Kyanka (@TwitterHasBannedAllMyAccountsEver)
Know of an awful site? Send it to us and become a hero!

Advertising Anything, submitted by Matt. There are many, many, many reasons to despise Macromedia Flash and harbor a deep, intense, undying hatred for it which will eventually consume your entire persona and turn you into a seething mass of fury. This site alone contains roughly 96% of those reasons. 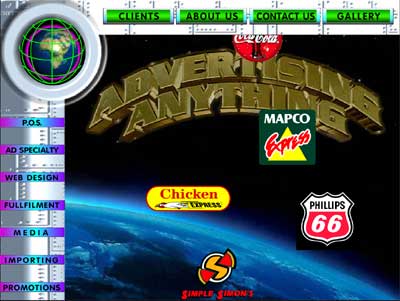 I... I can't even begin to describe this monstrosity. It's as if Macromedia personally stopped by my apartment, grabbed a bottle of neon pink and green Jack Daniels, then proceeded to sodomize me with it for the following seven hours. There's no logical layout or point to this site whatsoever. Dropdown menus appear when you mouseover an option, then immediately disappear when you attempt to click one of the choices. Loud, grating, obnoxious sound effects spew from your speakers at seemingly random times. Every page has a completely different layout and theme, ranging for "makes you want to hate the Internet" to "makes you want to use chemical weapons on the entire world." Random links fail to work, and the ones that do function properly make you pray that they didn't. I'm assuming that the corporate logos being belched up in the introduction screen were just grabbed from random sites across the Internet, as I cannot image any company more profitable than Snowball.com deciding to voluntarily advertise with these insane psychopaths. Once again, thank you very much, Internet!