If you’ve never watched A&E’s Intervention, then you probably don’t know who Jeff VanVonderen is. Gone are the days when A&E was known as the official Father Dowling Mysteries superstation; now the network actually provides captivating programming with significantly less Peter Graves. Intervention(don’t check local listings because it’s on cable you nitwit) is one of these post-Dowling era shows, with Jeff VanVonderen starring as an interventionist with nothing left to lose, three hours until retirement, and possibly seconds left to live. There’s nothing greater than watching the spiral of an addict’s life as it barrels down Desperation Railway into the old abandoned Danger Factory just off of Route 11. And once these people hit bottom, it’s Jeff’s job to wrangle their pathetic, enabling families and herd their little “black sheep” into treatment.

What follows are Jeff’s greatest hits; from reading this you may understand why the American Board of Interventionists awarded him “Best Lawn” from 1996 to 1998. 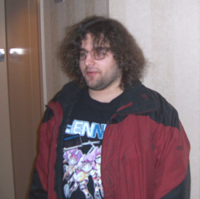 Contrary to popular belief, interventions aren’t just for drug users. A&E’s Intervention has featured subjects with addictions such as choclaholism, carbon monoxide frenzy (AKA “faulty furnace syndrome”), and chronic mp3 taggers. So when the Dorfmeullers needed help, there was absolutely no reason for Jeff to ignore the VanVonderen Signal™ - which is why he didn’t. Setting up the intervention in the typical Budget Lodge “crab-free guarantee” suite, Jeff used all of his cunning to lure Steve into the room. So Steve wouldn’t be dissuaded by the various industrial cables for the cameras and lighting running underneath the door, Jeff told the producers to inform Steve that the room would contain a robot girlfriend from the future that could transform into a little crippled girl and possibly a dog like in those damn animes. Taking the bait, Steve entered the room only to be overcome by the powerful mustached shadow master known as Jeff VanVonderen.

Traditionally, most interventions involve weepy friends and family members explaining how the addict’s addiction has cost them their lives and countless gas money. But as soon as Steve entered the room, Jeff raised his thick, earth-worn fist and silenced Steve’s associates. Then the stare-down began. Overcome with fear from the hairy white awning hanging over Jeff’s upper lip, Steve collapsed to the ground as various fluids began to leak from his body. As Jeff fixed his glare on Steve, the amount of escaped fluids slowly increased until they met VanVonderen’s personal standards. Jeff lowered his fist, and a team of junkie wranglers bound and gagged Steve and left his mess for the manager/jantior/groundskeeper at Budget Lodge. Intervention complete.