A World Without Music

Imagine, if you will, what our world would be like if music had never existed. 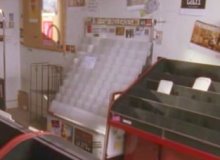 Music stores would be barren. Their shelves would contain nothing but alphabetical dividers and dust. Where a mish-mash of eclectic posters should hang, there would simply be bare walls and fliers for coffee bar poetry readings. Approach the counter and you would come across a slightly puzzled clerk, staring off at an unseen horizon as she puzzled over her decision to work in such a place.

Pianos would simply be seen as overly elaborate coffee tables. With no strings, the keys would be rendered nearly pointless, existing only to entertain owners who enjoyed compulsively pushing them in the same way that they might enjoy popping bubble wrap.

Clubs would be almost as weird as they are now. A bunch of people would get dressed up and pack into an unpleasant location, then dance with one another in near silence. With no music, the only sounds would be those of several hundred feet shuffling and stomping, with an occasional cough echoing through the hall.

MTV would pretty much be exactly the same as it is now. That ten year old joke would never have been made.

Big budget Hollywood movies would be way worse. Without cues from a soundtrack, viewers would have no way of knowing when a character said something that was inspirational, or when a dramatic moment was happening, or when two characters kissed. In Say Anything, John Cusack would hold a boombox over his head until the love of his life happened to look out the window, and then the two would stare at one another in silence until the credits rolled. 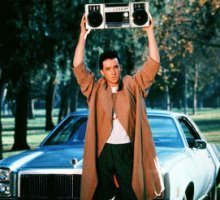 In the absence of shitty bass music that hasn't changed since the early 90s, you might think that attention-starved assholes would have no reason to turn their cars into mobile sonic apocalypses capable of forcing everyone within five miles to listen to a repetitious and tuneless muffled rattling. You would be wrong. Those car sound systems would be every bit as loud as they are right now. The bass would be every bit as prominent and terrible. Instead of music, however, those cars would blast out the amplified voices of Rush Limbaugh and Sean Hannity.

With no music, there would be no call for bards in fantasy fiction. Those mysterious scamps wouldn't exist at all if they could not sing their ballads of legendary figures and battles. Remove pages upon pages of abysmal italicized lyrics from any fantasy book, and the quality of the story would certainly decline. Well, maybe not. But the page count would certainly become smaller. Worse yet, Dungeons & Dragons would no longer have a bard class.

Going to a concert would be really weird. Everyone would take their seats and clap politely as a group of people walked on to the stage. The performers would make small talk with the audience while adjusting their microphone stands, then remind them to buy a t-shirt on the way out. Then the lighting would get all dramatic, with a huge screen rising up from the stage in a mist of special effects fog. As the band stood still, drinking water, the screen would display slickly edited clips of lasers and virtual reality. If the concert was headlined by a female pop artist, she would walk out and point at her wacky or sexy clothes, then take a bow. A mosh pit would form in front of the stage, the heavy breathing and excited grunts of the participants becoming the loudest sounds in the venue. If someone in the audience received a call on their cell phone, everyone in the audience would turn toward them and frown.

You would not believe how much iTunes would change. It would be completely different. The icon would no longer have a music note on it.

When the recipient of an award takes up too much time with their acceptance speech, we're used to hearing the gentle notes of a terrifically insulting song become louder and louder as a hint for the award winner to get off the stage. What would happen if that music did not exist? Producers would have no way of communicating their desire to wrap things up. Caught up in the moment, recipients would simply keep talking. Speeches would literally never end.

If you have a chance to visit a world without music via a wizard's portal, don't go. It seems like a really stupid place. Also, you don't even know that wizard. Don't be so eager to go along with his ideas.