Black Bike Week, submitted by noo glide. I have to imagine that this site came about when someone said, "You know, I've got this incredibly annoying MIDI version of Nelly's "Hot in Here," but I've got no way of showing it off." The solution to this dilemma? A website devoted to Black Bike Week. I've been all over this site and I still don't know exactly what Black Bike Week actually is, but my guess is that it's some sort of annual even when a bunch of black men and their "hoes" get together to show off their motorcycles and as much of their body as possible. The participants in this event do indeed follow Nelly's advice of taking off all their clothes (because of how hot it is in here). Unfortunately, what was hidden beneath their clothes was apparently some sort of massive cellulite-smuggling operation. Many of these women's thighs have more folds than an origami expo. 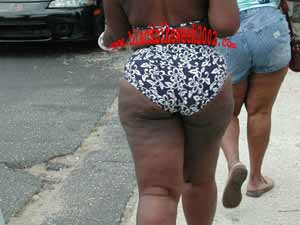 Well, I'm terrified. There are picture sets of women, men, couples, and multiple sets devoted solely to "booty," like the one featured above. Oddly, there are not that many pictures of bikes, black or otherwise. So this site has an incredibly irritating and ceaseless MIDI and a slew - no, make that several slews of absolutely grotesque pictures of absolutely grotesque people in absolutely grotesque poses, many of which are not safe for work. We're talking "My idea of a sexy pose is laying on my back and lifting one leg as far into the air as I can so that my calf fat drapes over my stomach" grotesque, here. But the assault on your senses does not end there. Black Bike Week also sports a laughable tiled background and swanky neon text that is, of course, nearly impossible to read over said laughable background. But wait, that's not all! If you get tired of not seeing pictures of bikes from Bike Week, you can check out Black College Reunion! It's precisely the same thing as Black Bike Week, but at least there's a good excuse for not featuring any bikes in these pictures. You can also purchase videos from Black Bike Week and Black College Reunion. I don't know why you'd need one, though. Even in the still photos, you can see the cellulite wriggling and congealing without any trouble. Gah. Enjoy, then kill yourself.